AP source: Peat has surgery on broken arm, out about 6 weeks 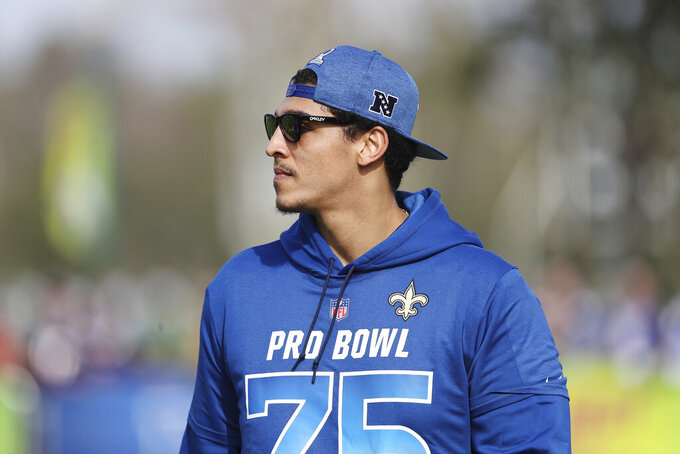 This Jan. 23, 2019 photo shows NFC tackle Andrus Peat in action during Pro Bowl NFL football practice in Kissimmee, Fla. A person familiar with the situation says Peat had surgery to repair a broken arm on Wednesday, Nov. 13, 2019 and is expected to be sidelined about six weeks. The person spoke to The Associated Press on condition of anonymity because the extent of Peat’s injury and his surgical repair has not been announced. ESPN first reported those details. (AP Photo/Gregory Payan)

NEW ORLEANS (AP) — New Orleans Saints starting left guard Andrus Peat has had surgery to repair a broken arm and is expected to be sidelined about six weeks, said a person familiar with the situation.

The person spoke to The Associated Press Wednesday on condition of anonymity because the extent of Peat’s injury and his surgery has not been announced. ESPN first reported details of the surgery.

The 2018 Pro Bowl selection was injured during the first half of Sunday’s 26-9 loss to Atlanta.

Peat was New Orleans’ first-round draft choice in 2015 and has started 59 of the 64 career games he’s played.

Although Saints players did not indicate whether they’d been briefed on the specifics of Peat’s injury or his estimated absence, they addressed the likelihood of having to play multiple games without him after he’d missed Wednesday’s practice.

“It’s a loss for us, for sure. Andrus is playing well, he has a lot of experience,” Saints left tackle Terron Armstead said.

The former Stanford offensive tackle has played both at guard and tackle for New Orleans. His primary role has been as starting left guard since 2016, but he also has slid over to play tackle when there have been injuries at that position.

“Of course, it’s difficult, because he’s been a starter for what, five years now, and been one of the main components there with the front,” quarterback Drew Brees said.

The Saints (7-2), who visit Tampa Bay (3-6) this Sunday, lead the NFC South Division by two games and aim to make the playoffs for a third straight season.

Unless the Saints elect to place Peat on injured reserve, he could return by the final week of the regular season. In the meantime, New Orleans could rely on former LSU interior lineman Will Clapp, who filled in after Peat’s injury on Sunday.

“We’ve got veteran guys who have been in this league for a while and have done it,” Armstead said. “That’s encouraging. We’ve got confidence in all those guys.”