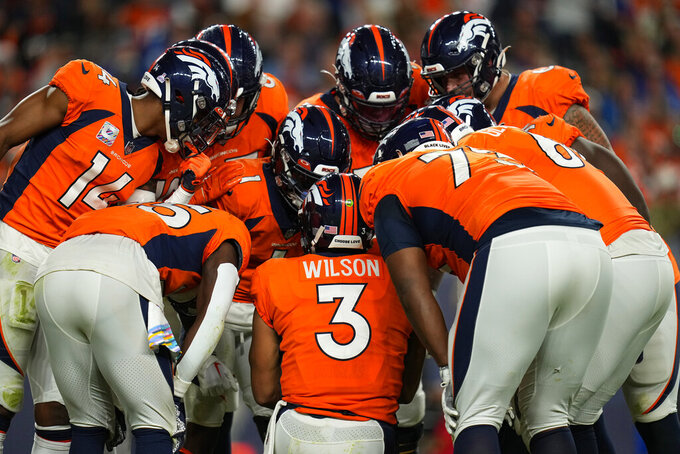 Denver Broncos quarterback Russell Wilson (3) huddles up his team during the second half of an NFL football game against the Indianapolis Colts, Thursday, Oct. 6, 2022, in Denver. (AP Photo/Jack Dempsey)

DENVER (AP) — Denver Broncos quarterback Russell Wilson received an injection on Friday to alleviate discomfort near his throwing shoulder, a person with knowledge of the procedure confirmed to The Associated Press.

The person, speaking on condition of anonymity because neither the team nor the QB's camp was publicly discussing the procedure, confirmed the report by the NFL Network on Saturday that Wilson received a platelet-rich plasma injection in Los Angeles to treat a strained latissimus dorsi.

That's an injury that's more common in baseball players and isn't typically treated with an injection.

Dallas quarterback Dak Prescott had a similar injury that sidelined him for most of the Cowboys' training camp last year. He didn't throw for a month to let his injury heal.

The Broncos don't play again until Monday night, Oct. 17, against the Los Angeles Chargers (2-2) following their 12-9 overtime loss to the Indianapolis Colts on Thursday night. They're hoping the injection and round-the-clock care will keep Wilson from missing any games.

Wilson missed three games with a broken finger on his throwing hand last season in Seattle, the only time in his 11-year career he’s been sidelined.

Wilson popped up on the injury report Tuesday and coach Nathaniel Hackett said the quarterback's throwing shoulder had been “dinged up” in Denver's 32-23 loss at Las Vegas last weekend.

Wilson completed 21 of 39 passes Thursday night, when he was evaluated for a concussion after attempting a tackle on one of his two interceptions. He stayed in the game after being cleared by medical staff.

After the game, which ended with his incompletion into the end zone to a well-covered Courtland Sutton, Wilson huddled with Hackett at his locker for an extended time. He was still in full uniform, including pads, when he met with the media an hour after the game.

Wilson briefly mentioned “battling” shoulder discomfort in his postgame comments but didn't blame the injury for his poor performance in which he threw two key interceptions and didn't see a wide-open KJ Hamler on the final play in overtime.

“I was battling, obviously, just the shoulder and all that, and just trying to play quickly,” Wilson said. “We should have won that game. Should have won it. Like I said, it’s on me.”

On Saturday, Wilson quoted Winston Churchill in a tweet: ““If you’re going through hell, keep going.”

Wilson and Hackett, a first-time head coach, are off to a rocky start in Denver, where fans have booed the offense — which is averaging just 14.6 points per game — in all three home games. Thousands of fans streamed to the exits Thursday night before the overtime coin toss.

Wilson has completed 59.4% of his throws with four touchdown passes and three interceptions through five games. He's been sacked 16 times and is 2 for 18 on throws into the end zone after Stephon Gilmore's end zone interception led to the Colts' tying field goal with 5 seconds left in regulation and his pass breakup in the end zone sealed Indy's stunning win in overtime.

The Broncos acquired the nine-time Pro Bowler from Seattle in March in a blockbuster trade that cost them three players and five draft picks, including two first-rounders. The new ownership group gave Wilson a $245 million contract extension before Wilson had taken his first snap for Denver.

The Broncos were widely seen as a playoff contender after the arrivals of Hackett and Wilson, the sixth different starting QB in six seasons. But a rash of injuries complicate matters as they try to jumpstart Denver's stagnant offense.

In the last week, left tackle Garett Bolles (ankle) and leading rusher Javonte Williams (knee) were lost for the season. The Broncos lost their leading receiver from 2021 when Tim Patrick tore an ACL in August.

The Broncos are also missing key defenders with pass rusher Randy Gregory (knee) on IR and cornerback Ronald Darby out for the year with a torn ACL.