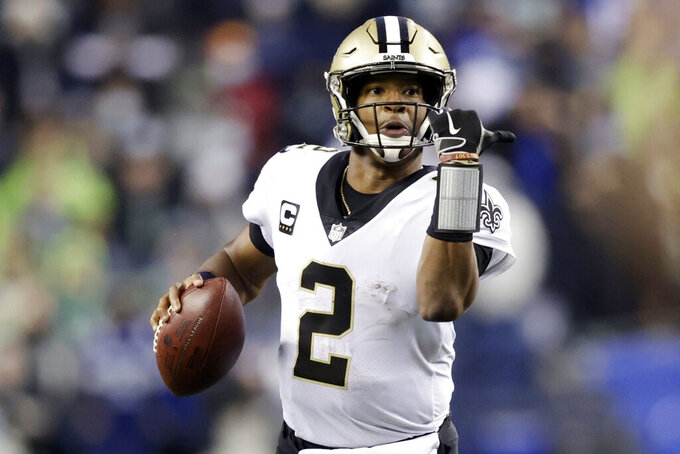 New Orleans Saints quarterback Jameis Winston looks for a receiver during the first half of an NFL football game against the Seattle Seahawks on Oct. 25, 2021, in Seattle. Winston arguably tops the list of free agents because New Orleans appeared on track to make the playoffs to start the post-Drew Brees era when Winston's season ended with a torn anterior cruciate ligament in his left knee on Oct. 31. (AP Photo/John Froschauer, File)

Winston, who started seven games for New Orleans in 2021 before a season-ending knee injury, has agreed to a two-year contract, the person told The Associated Press on condition of anonymity because the move has not been announced.

NFL Network first reported Winston's deal, which is reportedly worth about $28 million.

The Saints went 5-2 in the games Winston started in 2021, although he played just two series in his seventh game before tearing knee ligaments when he was brought down by Tampa Bay linebacker Devin White during scramble.

While the 28-year-old Winston's rehabilitation from reconstructive surgery appears to be on schedule for him to play next season, his return to New Orleans had been uncertain while the Saints explored options at the all-important position.

New Orleans was among the leading suiters for Deshaun Watson before he approved a trade from Houston to Cleveland. The Browns' Baker Mayfield and San Francisco's Jimmy Garoppolo also could wind up with new teams via trades.

The 28-year-old Winston did not post particularly high passing numbers in his first season starting for the Saints as the successor to franchise all-time passer Drew Brees.

Winston completed 59% of his passes for 1,170 yards. But his 14 touchdown passes and just three interception represented a considerable improvement in his ability to minimize risk compared to his final season with Tampa Bay in 2019, when he was intercepted an NFL-high 30 times.

Winston also did not have a chance to throw to Saints top receiver Michael Thomas, who missed all of last season because of a setback related to offseason ankle surgery. Thomas is expected to return healthy in 2022.

The Buccaneers chose not to bring back Winston, whom they drafted first overall out of Florida State in 2015, when they had an opportunity to sign former Patriots quarterback Tom Brady in the spring of 2020.

Winston was a mercurial performer through his first five NFL seasons with Tampa Bay.

While he was prone to throwing interceptions in 2019, he also led the NFL with 5,109 yards passing to go with 33 touchdown passes.

In his career, Winston has completed 61.2% of his passes for 20,982 yards and 135 TDs vs. 91 interceptions. But while Winston’s accuracy and decision-making were questionable at times, his ability to drive throws downfield for big plays was never in doubt.

Last season he threw for a 72-yard touchdown during a victory in Washington and had a 55-yard TD pass against Green Bay in a season-opening triumph.