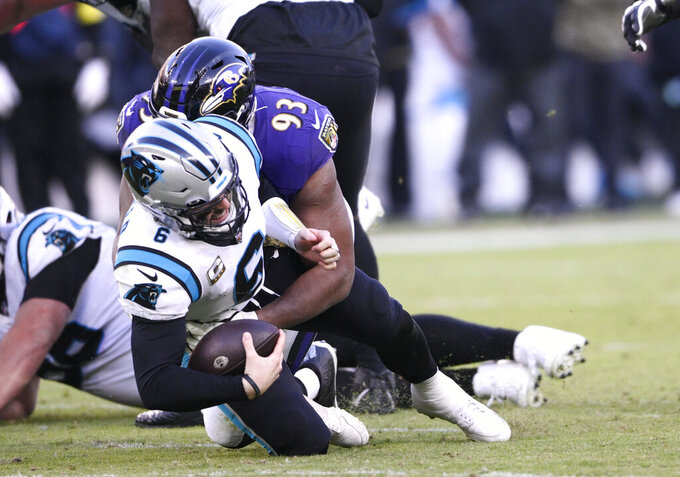 OWINGS MILLS, Md. (AP) — After recovering a fumble and intercepting a pass in the fourth quarter, Baltimore defensive back Marlon Humphrey said the Ravens were trying to measure up to the defenses that led the franchise to its greatest heights.

“That’s kind of what we’re chasing, and we’re looking better and better every week,” he said.

Baltimore's 13-3 victory over Carolina on Sunday looked like a throwback to the days when the Ravens could win big with a phenomenal defense and a marginal offense. Although this year's team is capable of scoring points with Lamar Jackson at quarterback, it's the improvement on the other side of the ball that has made its current four-game winning streak possible.

The Ravens had only 308 yards of offense Sunday and only two drives of more than 50 yards. Their only touchdown came with the benefit of a short field after a Carolina fumble.

But Baltimore (7-3) held the Panthers to just 205 yards — after holding New Orleans to 243 in the previous game. By contrast, when the Ravens lost to Miami 42-38 in Week 2, they allowed 233 yards in the fourth quarter alone.

Baltimore signed linebacker Jason Pierre-Paul in late September and traded for linebacker Roquan Smith about a month later to boost the defense. The pass rush has become a factor, and the Ravens added four more sacks against Carolina.

“We haven't really changed course. We've stayed on course, and we just tried to improve," coach John Harbaugh said Monday. "The guys have done that, it's starting to show up in a real good way the last month or so, and we've got to keep getting better.”

The Ravens now have a plus-9 turnover margin after forcing three in the fourth quarter against the Panthers. Sometimes that's the type of stat that might regress over the course of a season, but the Ravens are doing a good job pressuring the quarterback, and the fact that they have been playing so often with the lead creates opportunities for interceptions.

Harbaugh wasn't thrilled with the penalties Baltimore committed against Carolina. There were 10 for 93 yards.

One action that wasn't penalized was when Jackson gave the ball a little punt in frustration.

“They could call that delay of game, so that's not something we're looking for,” Harbaugh said. “He does it in practice. It's probably my fault for tolerating it in practice sometimes. So I'm going to tell him it's my fault, so we won't do it in practice anymore then either.”

Demarcus Robinson had nine catches for 128 yards, just his second 100-yard game in 107 regular-season appearances. He also had six catches in a win over Tampa Bay two games ago.

“I wish we could have played as well as the defense did,” Robinson said. “It would really be another level to the team. The defense plays outstanding almost every week. I think we just need to keep upping our ante on offense so we can meet their standard.”

With Rashod Bateman out because of foot problems, Jackson seems to be growing more comfortable with Robinson as a primary target.

It took a while for Baltimore to get its running backs going with Gus Edwards (hamstring, knee) sidelined. Kenyon Drake and Justice Hill finished with 76 yards on 17 carries, but the Ravens had their eight-game streak of rushing for at least 150 yards snapped — although Jackson's running ability helped them surpass 100.

Harbaugh expressed optimism about S Kyle Hamilton (knee) and T Ronnie Stanley (ankle), who were hurt Sunday — although he said Stanley still had to have an MRI.

0 — The number of times the Ravens have trailed by double digits this season. Meanwhile, they've had a double-digit lead at some point in every game.

The Ravens are the third team to lead by double digits in each of the first 10 games while never trailing by double digits. The others were the 1984 Dolphins and the 1942 Chicago Bears.

Much has been made of Baltimore's favorable schedule the rest of the way, and the Ravens play at Jacksonville (3-7) on Sunday. The Jaguars have more time to prepare because they'll be coming off their open date.