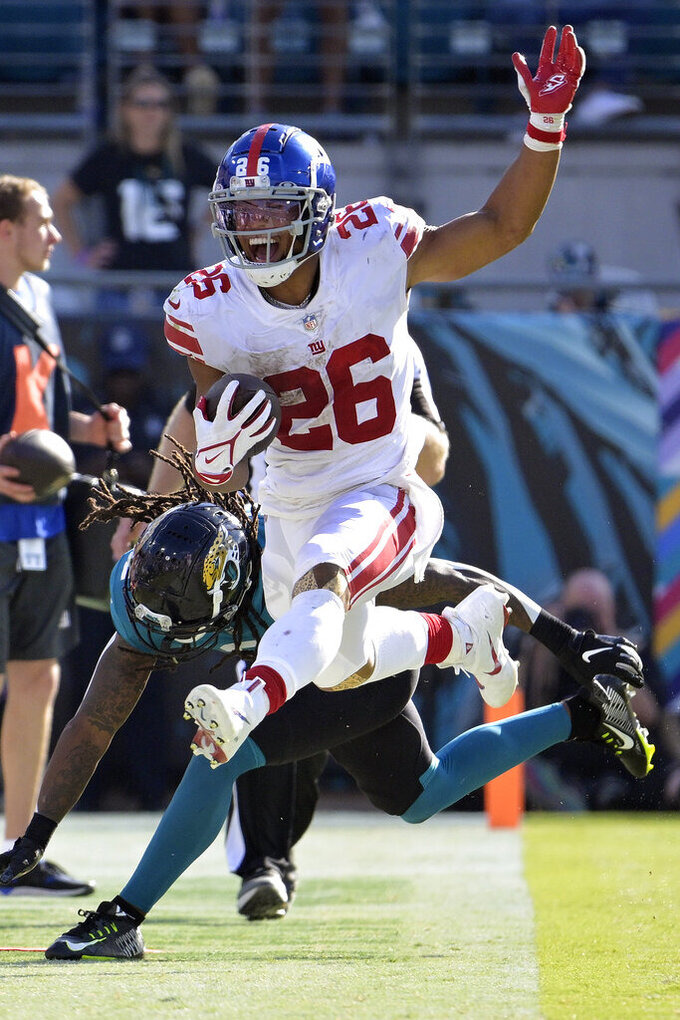 New York Giants running back Saquon Barkley (26) reacts after getting pushed out of bounds by Jacksonville Jaguars safety Rayshawn Jenkins (2) during the second half of an NFL football game Sunday, Oct. 23, 2022, in Jacksonville, Fla. (AP Photo/Phelan M. Ebenhack)

While he knows the numbers, the New York Giants running back doesn't believe they do anything on game day.

For example, Barkley is heading into Sunday's game at MetLife Stadium against the Houston Texans as the NFL's third leading rusher this season with 779 yards. The Texans (1-6-1) not only have a bad record, they are last in the league in run defense, allowing an average of 180.6 yards.

So it's easy to project the 25-year-old Barkley is going to have another big day as the Giants (6-2) try to improve their playoff hopes coming out of their bye week.

“When we played Seattle, their rush defense wasn’t up there. It wasn’t the highest,” said Barkley, who gained 53 yards on 20 carries against the Seahawks in the game before the bye. “They did a really good job of game-planning and scheming the run. Every week it’s a new challenge. It’s the NFL; there are a lot of good players over there.”

The run game has been the go-to weapon for the Giants, who are averaging 161.5 yards. Barkley is averaging 4.8 yards per carry while posting three games of at least 100 yards rushing.

One thing opponents have done lately is put more players in the box to slow down the run.

“The beauty of having more people in the box — the safeties — is once you get past a certain level, there’s really no one else back there," Barkley said. “So, you’ve got to capitalize on that. But that’s really not up to me.”

The play of quarterback Daniel Jones has helped Barkley, who struggled last season coming off an ACL injury in 2020. Jones has rushed for 363 yards and prevented opposing defenses from keying on No. 26.

If the Giants get the passing attack to improve, that would also help. The receivers have been limited by injuries but Kenny Golladay is supposed to come back this week after missing four games with a knee injury.

Coming off the bye week, Barkley said he his body is rested while adding his mind is clearer after being able to get away from the daily grind.

“It actually makes you appreciate football so much more,” he said. “You’re like, ‘I want to get back to it as fast as possible.’ But spend more time with your family.”

During his time off, Barkley attended a birthday party for former Giants receiver Odell Beckham Jr., who is a free agent. There was no recruiting on Barkley's part, noting Beckham knows how much Barkley would like him to return to the Giants.

Dallas Cowboys linebacker Micah Parsons and running back Ezekiel Elliott recently tweeted at Beckham, telling him to consider joining the Cowboys once he finishes rehabbing his knee from an ACL injury.

Barkley says he doesn't need to tweet or make a sales pitch.

“Personally, I think it would be a great story to come back to a place that you were at before and continue to help build success and continue to come here with the right mindset and be a leader and be the type of player he can be for his team,” Barkley said. “Like I said, he’s a special player. He can help any team.”