Bears don't capitalize on chances in falling to Giants 20-12 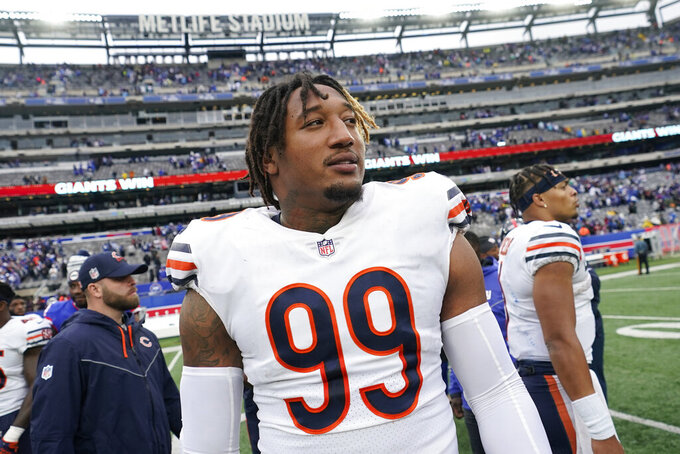 EAST RUTHERFORD, N.J. (AP) — The Chicago Bears had a chance to win for the third time in four games under new coach Matt Eberflus — until they did everything possible to prevent it.

Chicago settled for four field goals, including three inside the red zone, gave up 262 yards rushing and lost two fumbles, including one on a punt with 2:01 to play, in dropping a 20-12 decision to the New York Giants on Sunday.

The story has been the same for the Bears (2-2) all season. The defense has played well enough to win, but the offense led by Justin Fields has averaged 16 points.

“We definitely have to punch it in the red zone to win the game,” said receiver Darnell Mooney, who had four receptions for a season-high 94 yards after catching four passes in the first three games. “The defense is playing well. What was it, 20 points? It’s enough to get the win, but we’ve just got to punch it in, for sure.”

Chicago got field goals of 29, 22, 40 and 35 yards by Michael Badgley, who was signed Saturday with starter Cairo Santos missing the game for personal reasons.

The first two kicks came after the Bears reached the Giants 11 and 4, and the third reached the 17. The fourth came on a series that started after Chicago recovered a fumbled punt by Richie James at the New York 35.

All were within touchdown range.

Fields said a lot of things hurt the Bears in the red zone.

“I think the main thing was just execution,” he said. “Of course, every red zone drive was different, but I felt like we did a good job driving the ball, getting to the red zone. But I think we’ve just got to capitalize on it when we get down there and score seven.”

Eberflus said settling for field goals is never good with the Giants getting a pair of touchdowns runs from quarterback Daniel Jones before he hurt his ankle in the third quarter.

One of those TDs by Jones was set up by a strip-sack of Fields by linebacker Azeez Ojulari. Rookie Kayvon Thibodeaux recovered the ball.

“Obviously, in the first half, we needed to do a better job of stopping the run with the quarterback,” Eberflus saaid. “I thought we did a good job of adjusting to that in the second half. Saquon (Barkley) ended up popping some runs on us and they ran the ball too effectively for us to win the game today. So, we have to improve that, for sure.”

The Giants came in with the NFL's fifth-best rushing attack and gained a season high against the Bears.

“They had over 250 yards rushing,” Bears defensive end Robert Quinn said. “We’ve all got to look ourselves in the face there. We can’t allow any game like that. We’ve got to realize who we are and what we can be.”

With all that, the Bears had a chance late.

Trailing by eight with 2:13 to play, Chicago forced a punt. Jamie Gillan launched a 59 yarder that returner Velus Jones Jr. fumbled and Gary Brightwell recovered for New York at the Bears 37.

“It’s definitely frustrating,” he added. “I’m definitely going to let this one sit and hurt. It’s going to motivate me next time I’m out there.”