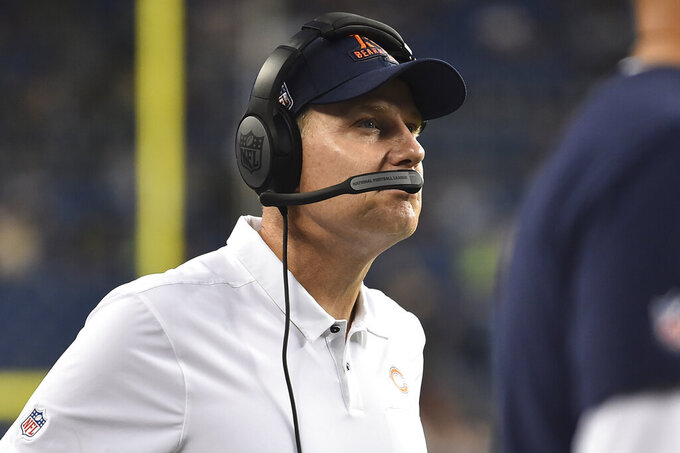 Chicago Bears head coach Matt Eberflus looks toward the scoreboard during the second half of a preseason NFL football game against the Seattle Seahawks, Thursday, Aug. 18, 2022, in Seattle. The Bears won 27-11. (AP Photo/Caean Couto) 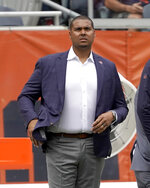 A contract standoff with star linebacker Roquan Smith that ended without a new deal added drama. But after an eventful offseason, the Bears are ready to begin a new era.

Chicago comes into the season with few established playmakers on offense and questions to answer on defense, starting with the opener against San Francisco on Sept. 11.

The Bears have a long way to go before they're challenging Aaron Rodgers and the Green Bay Packers for supremacy in the NFC North, let alone contending for a Super Bowl title. But for now?

“I think it’s maximizing who your team is,” Poles said. “Can you be the absolute best version of your team is, first and foremost?”

The Bears went 6-11 last season and missed the playoffs for the ninth time in 11 years. That convinced chairman George McCaskey the team needed new leadership.

He fired GM Ryan Pace and coach Matt Nagy and replaced them with Poles and Eberflus, who are doing their respective jobs for the first time.

Poles spent 13 years in Kansas City's front office, rising from a scouting assistant to executive director of player personnel while working under three general managers. He was the Chiefs' director of college scouting when they drafted Patrick Mahomes in 2017 with the No. 10 overall pick after Chicago drafted Mitchell Trubisky second overall.

Poles gets credit for making the right choice at quarterback. Mahomes has an MVP and a Super Bowl title in four seasons as the Chiefs' starter. Trubisky lasted four seasons with Chicago, was a backup in Buffalo last season and now plays for Pittsburgh.

Eberflus spent the past four years as Frank Reich's defensive coordinator in Indianapolis. He has the Bears going to a 4-3 front after seven years in a 3-4.

The roster has a different look with stars such as three-time All-Pro linebacker Khalil Mack and receiver Allen Robinson gone. But the Bears didn't make any big-splash additions in the offseason. Their most notable free agent move imploded when they backed out of a three-year, $40.5 million deal with defensive tackle Larry Ogunjobi because he failed a physical.

The Bears need Fields to take a step forward.

The former Ohio State star was in a difficult spot with the old regime essentially planning to have him redshirt the season. That changed when veteran Andy Dalton was injured in Week 2.

Fields took over and wound up with 10 interceptions and seven touchdown passes to go with an unimpressive 73.2 rating. Chicago's offense ranked among the worst. But Fields is in a different spot, the clear-cut No. 1 QB.

“He’s a quick learner," Eberflus said. "He’s all in. Great listener. And he applies it to the field. So, he’s great that way.”

Besides the shortage of established playmakers surrounding him, Fields is lining up behind a retooled line. Chicago allowed a league-leading 58 sacks and ranked among the worst in turnover differential at minus-13 last season.

The standoff between Smith and the Bears became the biggest story of training camp.

Smith participated in offseason workouts and practices. But once camp started, things took a tense turn.

Smith opted to “hold in,” attending meetings and watching practices without participating in drills. The tension mounted when he went public with a trade request. Poles said he would continue to work toward an extension rather than deal him, then removed him from the physically unable to perform list the following day. That cleared the way for the Bears to fine Smith for missing practices.

Darnell Mooney made big strides in his second season with 81 catches for 1,055 yards. But the Bears appear to be thin at wide receiver, particularly with Robinson now playing for the Los Angeles Rams after a brutal 2021 season for him.

The Bears are counting on someone else to step up, whether it's former Chief Byron Pringle or former Packer Equanimeous St. Brown.

Defensive end Robert Quinn went from registering two sacks in 2020 to breaking Hall of Famer Richard Dent's club record with 18 1/2 last season. But at 32, can he approach that level again?

David Montgomery and Khalil Herbert could give the Bears an effective running back tandem.

Montgomery comes into his fourth season with something to prove after being slowed by a sprained knee and seeing his production dip. He missed four games and wound up running for 849 yards after going for 1,070 the previous year.

Herbert had a promising rookie season, running for 433 yards and averaging 4.2 per carry.