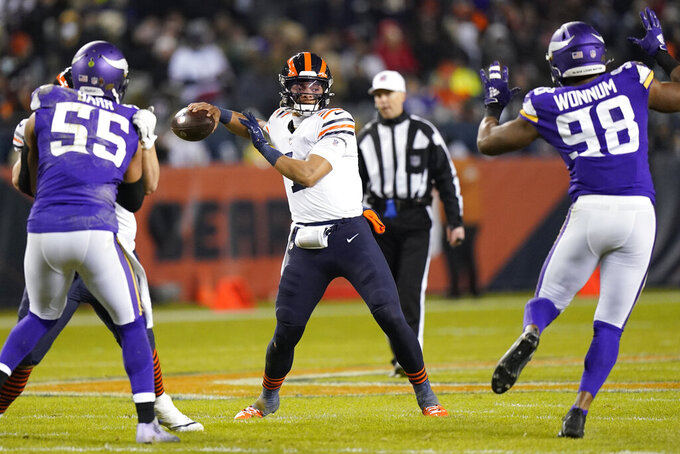 CHICAGO (AP) — Quarterback Justin Fields likely will miss his second straight game because of an ankle injury when the Chicago Bears host the New York Giants on Sunday.

“Justin is continuing to improve every day, but as I’ve said from the start, we want to make sure that we’re always putting him and these players in the best position possible,” Nagy said. “So, he’s working toward that. If he’s gonna be up, then we’d want him to be the starter. That’s why we’re making that decision.”

Fields missed last weekend's win at Seattle after getting injured in a Monday night loss to Minnesota.

Foles made his first start in 13 months and led the Bears (5-10) to a 25-24 comeback victory. The Super Bowl 52 MVP threw a 15-yard touchdown to Jimmy Graham with about a minute remaining. Damiere Byrd made an acrobatic reception for the 2-point conversion, and Chicago came out on top after losing eight of nine.

Nagy said the “pain of the football movements” is limiting Fields. He also said the prized rookie is doing everything he can to be ready for the season finale at Minnesota on Jan. 9.

Fields, the No. 11 overall draft pick, moved into the starting role after Dalton was injured in Week 2. He has displayed the quickness, arm and poise that have the Bears thinking big things could be on the way. But there is clearly room to improve.

Fields has more interceptions (10) than touchdowns (seven), to go along with a rather ordinary completion rate (58.9%) and passer rating (73.2). He did string together several promising performances in a row before cracking his ribs against Baltimore in Week 11.

Fields missed the next two games, then returned in the loss to Green Bay on Dec. 12 before hurting his ankle against Minnesota.

The Bears would obviously like him to play again this season. But they also have to weigh that against the risk of injury.

“We’re never gonna do anything to jeopardize his health,” Nagy said. “It’s just not gonna happen. So once we get by that part, now the next question is, ‘OK. Medically, is he cleared?’ And then pain-wise where are you to be able to play football and be effective.”

Dalton, who joined the Bears on a one-year, $10 million contract in March, is poised to make his fifth start. The three-time Pro Bowler has thrown for 1,017 yards, six touchdowns and six interceptions in six games.

Dalton was intercepted four times in a loss to Arizona on Dec. 5 and broke his non-throwing left hand in that game. A lingering groin injury and his second COVID-19 diagnosis in as many years have since sidelined him. He said the symptoms he experienced from the virus this time weren't “too bad.”

“It’s kind of been a crazy month for me,” Dalton said. “But I feel good about where I’m at now and my body feels healthy and so I’m happy to be where I’m at now rather than where I was a few weeks ago.”