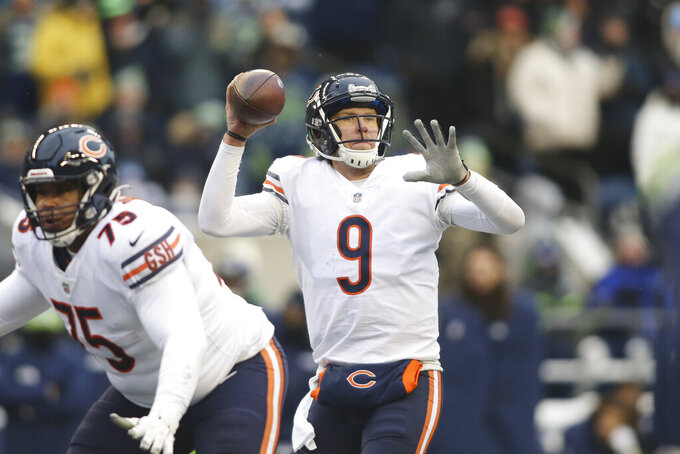 Chicago Bears quarterback Nick Foles (9) readies a throw against the Seattle Seahawks during the second half of an NFL football game, Sunday, Dec. 26, 2021, in Seattle. (AP Photo/Lindsey Wasson)

CHICAGO (AP) — Bears safety Eddie Jackson wanted to make one thing clear about Matt Nagy before what could be his final home game as Chicago's coach.

The team still has his back.

“We love Coach Nagy,” Jackson said. “I feel like he’s one of the best player coaches I’ve ever had and he truly cares about his players. You just want to continue to fight for someone like that.”

The Bears host the New York Giants on Sunday in a matchup of teams that could be in for big changes following difficult seasons.

Nagy might be fired, ending a four-year run that fizzled after winning the NFC North in his first season. General manager Ryan Pace has an uncertain future, after seven years and zero playoff victories.

On the other side, the picture is unclear, too. Giants GM Dave Gettleman could be out after four losing seasons, whether it's his choice or not.

But with two games remaining, both teams have one simple goal.

“Now, let’s finish strong,” Nagy said. “Let’s show everybody who we are. Even when things aren’t easy or things aren’t great, we still finish, and no one can take that away from us.”

“It’s still all about how you finish and it’s still about competing, snap in and snap out,” he said.

The Bears (5-10) got a reprieve last week, rallying for a 25-24 victory at Seattle after losing eight of nine. Super Bowl 52 MVP Nick Foles made his first start in 13 months with Justin Fields (ankle) and backup quarterback Andy Dalton (groin) injured and threw a 15-yard touchdown to Jimmy Graham with about a minute remaining. Damiere Byrd then made an acrobatic reception for the 2-point conversion, getting his knee down in the end zone with multiple defenders trying to push him over the back line, to put Chicago on top.

The Giants (4-11) come in with four straight losses overall and six straight on the road. New York was held to a season-low 192 yards at Philadelphia last week.

“The expectations and the competitiveness, that doesn’t change," coach Joe Judge said. "We’re not negotiating or compromising our standards around here. Every game is important.”

Fields will likely miss his second straight game because of the ankle injury.

Dalton, in his first season in Chicago, is poised to make his fifth start. The three-time Pro Bowler has thrown for 1,017 yards, six touchdowns and six interceptions in six games.

For the first time since Daniel Jones was lost for the season with a neck injury, Judge said he probably will play both backups this week against the Bears.

Mike Glennon started the first three games after Jones was hurt against the Eagles on Nov. 28 and did little. Jake Fromm got his first NFL start this past weekend against Eagles and was brutal. He was 6 of 17 for 25 yards with an interception before being benched in the third quarter. In Glennon's three starts, the Giants averaged 26 points. Fromm put up three points in two-plus quarters.

Glennon, who has thrown four TDs and eight interceptions this season, said alternating quarterbacks has drawbacks.

“I think getting into a rhythm would be probably — I’ve never actually had that, but I think it would create a challenge,” he said. “But if that’s what’s best for the team, that’s what we’ll be ready to do.”

Bears linebacker Robert Quinn ranks second in the NFL with 17 sacks and needs just one to break Hall of Famer Richard Dent’s club record of 17 1/2 in 1984.

He also needs a half-sack to reach 100 in his career and two to match his personal best of 19 in 2013 with St. Louis. The fact Quinn is doing this at age 31 and after managing just two sacks last season — his first in Chicago — makes it all the more remarkable.

The recent surge in positive tests for COVID-19 will have the Giants adjusting on defense this week.

Defensive tackle Dexter Lawrence has been a fixture in the middle of the line. He was added to the COVID-19 list on Wednesday and it’s unlikely he will play Sunday. Fellow defensive tackle Danny Shelton also is on the list and his status is uncertain.

That means the Giants may have to rely on Austin Johnson and a couple of practice squad players like David Moa and Woodrow Hamilton. Another option would be moving Leonard Williams inside and giving Quincy Roche and Raymond Johnson more time on the edges of the 3-4 front. Rookie linebacker Ellerson Smith also has can play up front.

In his second NFL season, Bears receiver Darnell Mooney has a shot at 1,000 yards.

The 2020 fifth-round draft pick has 62 receptions for 860 yards. He has also supplanted Allen Robinson as Chicago's most productive receiver.