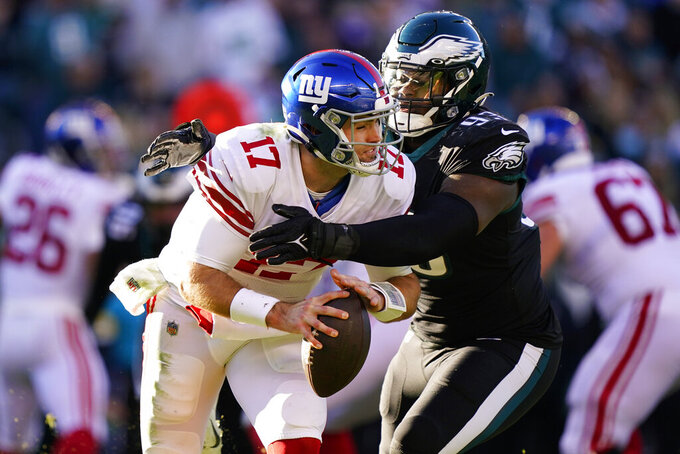 BETTING LINE: Bears by 6, according to FanDuel SportsBook.

TURNOVER DIFFERENTIAL: Giants minus-3; Bears minus-13.

GIANTS PLAYER TO WATCH: WR Kenny Golladay. The Giants paid $72 million to sign the former Lion to a four-year contract in the offseason. He has yet to score a touchdown. He is due. He has 34 catches for 499 yards in 12 games. Golladay has played six games against Chicago and scored three touchdowns, including a game in 2019 when he had four catches for 158 yards and a TD.

BEARS PLAYER TO WATCH: WR Darnell Mooney. The second-year pro has eclipsed Allen Robinson as Chicago's most productive receiver. And with 860 yards receiving, he has a chance to reach 1,000 for the first time.

KEY MATCHUP: Bears OLB Robert Quinn vs. Giants LT Andrew Thomas. Quinn ranks second in the NFL with 17 sacks and is closing in on Hall of Famer Richard Dent’s club record of 17 1/2 in 1984. He also needs a half-sack to reach 100 in his career and two to match his personal best of 19 in 2013 with St. Louis.

KEY INJURIES: Giants DT Dexter Lawrence (COVID-19) and OT Matt Peart (knee) are out. ... CB Adoree Jackson, CB Keion Crossen, WR John Ross came off the reserve/COVID-19 list this week and may play. ... WR Kadarius Toney picked up a shoulder injury this past weekend in his first game in a month. ... WR Collin Johnson missed last week with a hamstring injury. ... Bears QB Justin Fields (ankle) is expected to miss his second straight game. Coach Matt Nagy said Friday that Andy Dalton will start after being sidelined because of a groin injury and Nick Foles will be the backup. ... WR Allen Robinson, CB Jaylon Johnson and S Tashaun Gipson were cleared Monday to return from the reserve/COVID-19 list. DT Akiem Hicks remained on it as of Wednesday.

SERIES NOTES: The two teams are meeting for the fourth straight year and third in a row at Soldier Field. The Bears have won the past two by a combined nine points.

STATS AND STUFF: The Giants have lost four straight overall and six in a row on the road. ... New York was held to a season-low 192 yards against the Eagles last weekend. They Giants have scored a combined 46 points in the four games since Daniel Jones was hurt against Philadelphia on Nov. 28. ... Coach Joe Judge is not saying whether Mike Glennon or Jake Fromm will start at quarterback this week. Fromm made his first NFL start last week and struggled. Glennon, a former Bear, replaced him early in the third quarter and looked better. ... RB Saquon Barkley will be playing in Chicago for the first time since tearing his ACL and MCL against the Bears on Sept. 20, 2020. .... Evan Engram caught the Giants’ only touchdown last week. He needs seven receptions in the final two games to pass Mark Barvaro (266) for third in franchise history among tight ends. ... Rookie LB Azeez Ojulari needs two sacks in the final two games to reach 10 for the season. He already has the team record. ... LB Lorenzo Carter has at least one sack and one forced fumble in each of the last two games. ... With two games left, the Bears are trying to finish a rough season on a stronger note. They hope to build on last week's comeback win after dropping eight of the previous nine. ... In his first start since November 2020, Foles threw for 250 yards and a touchdown to Jimmy Graham with about a minute remaining. The late score led to a winning 2-point conversion pass to Damiere Byrd. ... Mooney's 123 receptions are the most by a Bears wide receiver in his first two NFL seasons. RB Tarik Cohen had 124 in his first two years, the most by any Chicago player.

FANTASY TIP: Bears RB David Montgomery has been active in the run and pass games in recent weeks. He has combined for 20 or more rushes and receptions in four of the past five games, and has run for two TDs in that span. The Giants have had their difficulties defending the run.