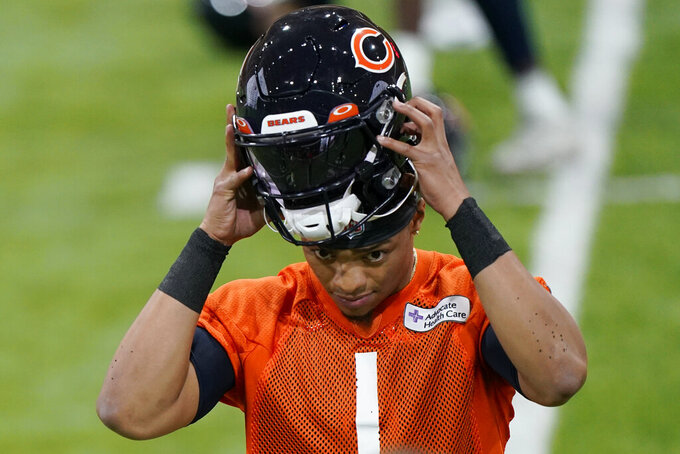 CHICAGO (AP) — The Chicago Bears hope to surround quarterback Justin Fields with the pieces the former Ohio State star needs in order to improve on a shaky rookie season.

A cornerback to start opposite Jaylon Johnson would help, too.

When it comes to the draft, there are a number of directions new general manager Ryan Poles could go. He just doesn't have many picks at the moment.

The Bears are without a first-rounder after sending it to the New York Giants last year to move up for Fields. And barring a trade, the won't be picking until Day 2 on April 29.

The Bears went 6-11 last season and missed the playoffs for the ninth time in 11 years. That convinced chairman George McCaskey to make big changes, so he fired former GM Ryan Pace and coach Matt Nagy and replaced them with Poles and Matt Eberflus.

Poles has been busy overhauling the roster, his biggest move being the trade that sent star pass rusher Khalil Mack to the Los Angeles Chargers. His most notable free agent signing was a three-year agreement with former Cincinnati Bengals defensive tackle Larry Ogunjobi that got wiped out because of a failed physical.

The draft is another important moment for Poles.

ESPN draft analyst Todd McShay figures six or seven receivers will be taken in the opening round and about 20 could go in the first three. But don't necessarily expect the Bears to select one with their first pick or two.

McShay had the Bears taking Texas A&M offensive lineman Kenyon Green with their first pick in a mock draft.

"And that was the value because Kenyan Green’s a player that could go in the first round," McShay said.

Fellow ESPN analyst Mel Kiper Jr. has Chicago going with Washington cornerback Kyler Gordon at 39 and Tulsa offensive lineman Tyler Smith at 48, though he doesn't rule out the Bears taking a receiver in the second round.

“The depth at wide receiver could allow the Bears to get some pretty good players from the third to fifth-round area,” Kiper said. “That’s gonna be the thing — which receiver, how high the grade is, in conjunction with the corner or the offensive lineman will determine who those picks are.”

Though the defense ranked sixth overall last season and third against the pass, Chicago was 29th in interceptions with eight. Johnson is the only cornerback with a secure starting job.

Kindle Vildor, who made 12 starts in his second season but struggled, could be in the running along with second-year pro Thomas Graham Jr. The Bears signed Tavon Young to fill a role at slot cornerback. But they could still use help in the draft.

The athletic and hard-hitting Gordon, who was first-team, All-Pac-12 last season, could be an option at 39.

“Gordon’s got ability,” Kiper said. “There’s no question. He flashed a lot of talent.”

“Wide receiver is certainly a position of need for them,” McShay said. “And there is depth.”

Though Darnell Mooney had 1,055 yards for Chicago last season, Allen Robinson was a distant second among wide receivers with 410 after back-to-back seasons with more than 1,100. And he's now with the Los Angeles Rams after agreeing to a three-year deal.

The Bears have since added Byron Pringle, who had 568 yards for Kansas City last season. But another playmaking receiver could go a long way toward helping their quarterback grow.

Fields threw more interceptions (10) than touchdown passes (seven) to go with an unimpressive 73.2 passer rating in what was supposed to be a sort of redshirt season for him until Andy Dalton was injured in Week 2. And Chicago's offense ranked among the NFL's worst.

The Bears are in familiar territory with no first-round pick. It would be the third time in four years they have none.

The Bears traded their 2019 and 2020 first-rounders to the Oakland Raiders as part of the trade for Mack just before the start of the 2018 season.