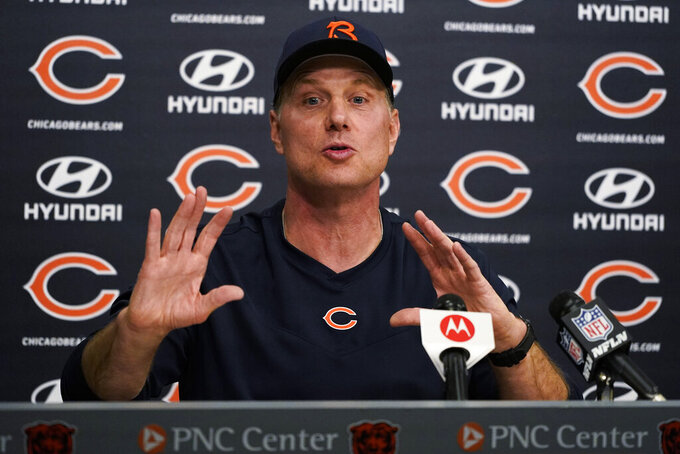 Whether they'll choose to participate when practices begin Wednesday remains to be seen.

While most of the attention figures to center on quarterback Justin Fields and his development as he prepares for his second season, the Bears could have a big issue on their hands if two of their best defensive players decide not to practice. Smith and Quinn could opt instead to “hold in” by simply attending meetings while not participating in on-field activities.

Smith wants an extension as he enters the fifth and final season of his rookie deal, while the 32-year-old Quinn's future with a rebuilding team is unclear.

Poles said he hadn't seen either player. But he was told on the way to his news conference that they had reported. Neither was made available to the media on Tuesday.

The Bears made big changes after going 6-11 and missing the playoffs for the ninth time in 11 years. Chicago fired former GM Ryan Pace and coach Matt Nagy, and traded star pass rusher Khalil Mack to the Los Angeles Chargers.

On defense, they're implementing a 4-3 scheme after the team played a 3-4 for the past seven years. And now, they might be practicing without two of their best players.

There was no sign of problems between Smith and the organization as he went through offseason workouts. He expressed a desire to get an extension done.

The 25-year-old Smith was a second-team All-Pro the past two years. But now, his long-term future is somewhat in doubt.

The most immediate question is when Smith will practice, and Poles didn't have an answer for that.

“I don’t know what his intentions are,” he said.

Poles insisted he still thinks highly of Smith, that "nothing’s changed from my end in terms of how I feel about the player and what he can bring to this team,” Poles said.

But he wouldn't say if he would rather get a deal done now with Smith or wait.

“That’s a tough question," he said. "I mean, I’m not going to get into the thoughts on what I would prefer and all of that. I just kind of do what’s on the table right now.”

Quinn set the franchise record in 2021 with 18 1/2 sacks. He was at Halas Hall for an April ceremony after winning the veterans Brian Piccolo Award, but wasn't at a single voluntary or mandatory practice.

Quinn’s contract runs through 2024. But it's not clear if he wants to remain in Chicago. The Bears cleared out veterans in the offseason, and he could be attractive to teams looking for help on the edge.

“I haven’t had that conversation with him," Poles said. "I would hope that he wants to be here, so nothing’s changed on that front.”

The potential “hold ins” by Smith and Quinn come on the heels of a challenging offseason for Poles. The Bears agreed to a three-year deal with former Cincinnati Bengals defensive tackle Larry Ogunjobi that got wiped out because of a failed physical. Three players Poles acquired — receivers David Moore and Byron Pringle, and linebacker Matthew Adams — were arrested.

NOTES: The Bears signed veteran OT Riley Reiff to a one-year contract. Reiff has started 139 games over 10 seasons with Detroit (2012-16), Minnesota (2017-20) and Cincinnati (2021). He made 12 starts last year. ... The Bears signed second-round draft pick Jaquan Brisker. The safety from Penn State was their only remaining unsigned selection.