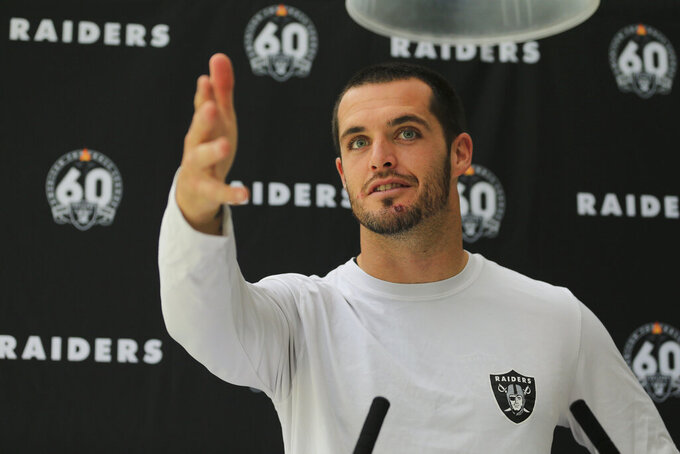 Oakland Raiders' quarterback Derek Carr attends a press conference after a practice session at the Grove Hotel in Chandler's Cross, Watford, England, Wednesday, Oct. 2, 2019. The Oakland Raiders are preparing for an NFL regular season game against the Chicago Bears in London on Sunday. (AP Photo/Leila Coker)

Khalil Mack delighted the Oakland Raiders for four seasons by racking up sacks, forced fumbles and other big plays as one of the NFL's top defenders.

Now he gets the chance to torment them 13 months after the Raiders traded their most productive draft pick of this century to Chicago following a lengthy contract holdout.

"Vindictiveness. I like that word," Mack said of his approach to Sunday's game in London for the Bears (3-1) against Oakland (2-2).

"Yeah. Yeah. I mean, that's the whole point man. You can't play this game with too much emotion, man. Ultimately, I try to stay focused on the task at hand and understanding the situation and understanding what they're going to be thinking that I feel. But ultimately, I'm going to go out there and do what I do and that's play football and love the game that I play. You know what I mean?"

The Raiders drafted Mack fifth overall in 2014, a round before taking quarterback Derek Carr. The two became tight and vowed to bring Oakland back to respectability after years of losing.

They managed to put together a 12-win season in 2016 when Mack won AP Defensive Player of the Year and Carr was an MVP candidate. But Carr broke his leg in the penultimate game of the regular season and Oakland lost in the wild-card round to Houston.

The Raiders stumbled to a 6-10 record the following year and Mack then held out of training camp in the first season under coach Jon Gruden while seeking a long-term contract and ultimately was traded to the Bears for a package that included two first-round picks.

"That's my brother, I love him to death, everyone knows that," Carr said. "He's one of my best friends. We'll be friends when we are all old and hopefully him with kids. I'm trying to nudge him in that direction, but this week it's different. We are competing against each other."

Carr knows it won't be easy dealing with Mack, who is a menace as a pass rusher. He has 17 sacks and 10 forced fumbles since joining the Bears last season compared to a Raiders defense that has just 18 sacks and eight forced fumbles from the entire unit.

As challenging as the matchup will be, Carr views it as no different than when he faces other great pass rushers such as Denver's Von Miller.

"I'm not going to be dropping back looking at Khalil. I don't drop back and look at Von, sometimes those guys just make great plays that's why they are Hall of Fame players," he said. "You just have to drop back, be on time with your throws and get the ball out, whether it's down the field, whether it's intermediate or short, whatever the play dictates."

The Raiders turned the first pick they got for Mack into running back Josh Jacobs, who is making a big impact as a rookie. Jacobs has rushed for 307 yards and two TDs, added three catches for 57 yards and leads all rookies in yards from scrimmage after four weeks.

With quarterback Mitchell Trubisky unavailable because of a left shoulder injury, Chase Daniel will make his third start in two seasons with Chicago. The 10-year veteran completed 22 of 30 passes for 195 yards and a 10-yard touchdown to Tarik Cohen. Daniel combined to go 53 of 76 with 515 yards, three touchdowns and two interceptions in two starts last season _ a win at Detroit and loss at the New York Giants.

"You know, we played a good game with him last week," said Allen Robinson, who had seven catches for 77 yards last week. "So I mean he's a guy we're familiar with, that we've gotten rep before, so it's not like it's an unfamiliar face."

The Raiders have a big hole in the middle of their defense after middle linebacker Vontaze Burfict was suspended for the rest of the season for a helmet-to-helmet hit last week against Indianapolis' Jack Doyle. Burfict was brought in for his deep knowledge of coordinator Paul Guenther's defense and had helped the team cut down on communications breakdowns that were too frequent last year. With Burfict gone, Tahir Whitehead will take over as signal caller.

Chicago held Dalvin Cook to 35 yards after he ran for a league-leading 375 through the first three games and sacked Kirk Cousins six times. Nick Williams and Roy Robertson-Harris combined for 3½ sacks, and linebacker Nick Kwiatkoski had one.

The Raiders have been frequent international travelers in recent years, moving five home games out of the country in the past six seasons. While they split their two contests in Mexico City in 2016 and '17, London hasn't been nearly as kind to them. They lost 38-14 to Miami in 2014 and fired coach Dennis Allen right after that. They lost 27-3 to Seattle last season when they spent most of the week back home before arriving two days before the game. This year, Gruden opted to spend the entire week in London.

"I learned a valuable lesson that we needed a little more time to get acclimated," Gruden said. "I'm used to playing home games at home, so I made a mistake and tried to correct it this year. Hopefully it shows on the field."