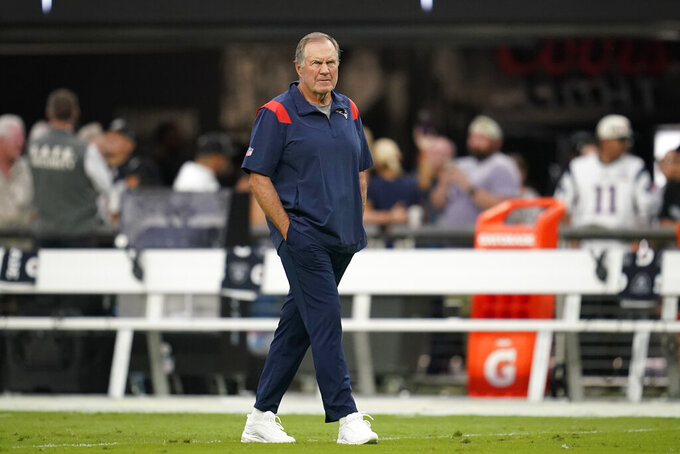 FOXBOROUGH, Mass. (AP) — In some ways, Dolphins coach Mike McDaniel is an enigma to Bill Belichick.

He doesn’t know him too well personally and there’s been little crossover between their staffs.

“Talked to him at the owners’ meetings and saw him down there, but that’s really about the extent of it,” Belichick said.

But the Patriots coach does have somewhat of a roadmap for what to expect in his matchup with Miami’s rookie head coach on Sunday.

That’s because McDaniel’s ascension up the coaching ranks has included tenures as an assistant under Mike Shanahan in Washington for three seasons, and most recently for Shanahan’s son, Kyle, for the past four seasons in San Francisco.

It won’t give Belichick a perfect picture of what his defense is in for, but it is a nice starting place as he looks to improve his recent history against the Dolphins following a three-year stretch in which he went just 2-4 against former head coach Brian Flores.

Prior to Flores’ tenure, Belichick had owned a 24-14 record against Miami since taking over as the Patriots coach in 2000.

Where the Dolphins defense shined under Flores, McDaniel’s first team is expected to be most formidable on the offensive side. Quarterback Tua Tagovailoa got big production out rookie Jaylen Waddle last season and will benefit from the offseason addition of one of the league’s top playmakers in Tyreek Hill.

“We know what Hill’s skillset is. We’ve seen him plenty of times in the past. We know what he can do,” safeties coach Brian Belichick said. “He does a lot of things exceptionally well. We know he’ll be utilized in the offense. It’s our job to try to figure out how to stop him."

The Patriots saw plenty of Hill during his time with Kansas City, where he was particularly dangerous in gaining yards after the catch.

That will be a focal point again, no matter how the Dolphins and McDaniel use him.

“The last two years, the 49ers have led the league in yards after catch. So they get a lot of yards after the ball is in the receivers hands,” Bill Belichick said. “A lot of emphasis on the zone running game. Things that we’ve seen from Kyle (Shanahan) and even before that from Mike Shanahan.”

McDaniel was a general offensive assistant and worked with receivers in Washington. Then, he served as the run game coordinator for three years in San Francisco before serving as offensive coordinator last season.

What stuck out most to Belichick as a common thread of the teams led by both Shanahan coaches was their ability to create different looks each week, each utilizing different players in the passing game. That filtered into the running game, which used a lot of run-pass options and bubble screens.

In short, it’s given the Patriots lots to prepare for.

“That’s always the way it is,” Bill Belichick said. “So you have to leave room for a little bit of the unknown, things that they’ve been working on that they haven’t shown. ... We’ll see how it goes.”