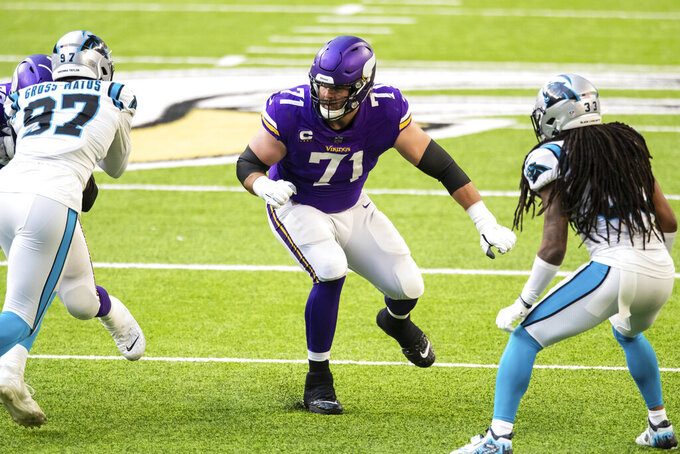 File-This Nov. 29, 2020, file photo shows Minnesota Vikings offensive tackle Riley Reiff (71) in action in the third quarter of an NFL football game against the Carolina Panthers in Minneapolis. Cincinnati bolstered its offensive line, which was a glaring weakness in a 4-11-1 2020 season, with the signing of ex-Vikings Reiff as the team seeks better protection for quarterback Joe Burrow. (AP Photo/David Berding, File)

The Bengals on Friday released the 32-year-old Atkins, who has been with the team for his entire 11-year NFL career, two days after seeing another one of the franchise's greatest players, receiver A.J. Green, leave for a one-year contract with Arizona.

Atkins was hampered by a shoulder injury last season and saw little time on the field. He is second on the team's all-time's sacks list behind Carlos Dunlap, who was traded last season after becoming unhappy with his lack of playing time.

“Geno has been here a really long time, and he's been a Hall of Fame player, has meant a ton to this organization,” coach Zac Taylor said Friday. “Myself, being here just for two years, what he's given us and how he's embraced us. He's had a tremendous career and will continue on with that career.”

Cincinnati bolstered its offensive line, which was a glaring weakness in a 4-11-1 season in 2020, with the signing of ex-Vikings tackle Riley Reiff as the team seeks better protection for quarterback Joe Burrow. The Bengals also are expected to add an offensive lineman early in the NFL draft next month, perhaps with the No. 5 overall pick.

Reiff said he was encouraged by the direction of the team and was impressed by Burrow after having dinner with the quarterback and other people from the organization.

“Went out to eat with him (Thursday) night, had a good steak, I went away from eating that steak and I was like ‘I want to block for this guy,’” said Reiff, a nine-year pro who also spent time with the Lions. “(Saw) him on the film, but he’s even better off the field. Just the way he conducts himself, carries himself. Seems like a down-to-earth Cincinnati-type guy."

As part of the remake of the offensive line, the Bengals released offensive tackle Bobby Hart.

“It’s hard to replace an offensive line if you’re looking to do that, which we’re not necessarily looking to do that entirely,” Cincinnati offensive coordinator Brian Callahan said. “But we’re always looking for guys that can help us. And if something comes available at some point, free agency still isn’t all the way over yet. It’s not like there’s a stop point here. So if there’s some things that come up that we feel like can help us, we’ll explore all of those options.”

After Carl Lawson signed with the Jets, the Bengals hoped to beef up their pass rush by picking up defensive end Trey Hendrickson, an edge rusher who had 13 1/2 sacks with the Saints last year, and ex-Browns defensive tackle Larry Ogunjobi.

Cincinnati also changed cornerbacks through free agency. William Jackson III signed a three-year deal with Washington, and Mackensie Alexander is expected to follow him out the door. Meanwhile, the Bengals added Chidobe Awuzie from the Cowboys and Mike Hilton from the Steelers.

Taylor said the return of cornerback Trae Waynes and defensive tackle D.J. Reader, who were big-ticket free-agent signings last year but missed most of 2020 with injuries, also will improve the defense.

Also this week the Bengals re-signed running back Samaje Perine, cornerback Tony Brown and kick-returner Brandon Wilson. The team said Friday that quarterback Ryan Finley was traded to the Texans instead of being released, leaving Brandon Allen as the only backup to Burrow.

“I think we've done well for ourselves, the way it's all played out,” Taylor said. “Free agency is a long week, two weeks, and I'm encouraged by the guys we've added to the mix. They're exactly the pieces we had in mind.”