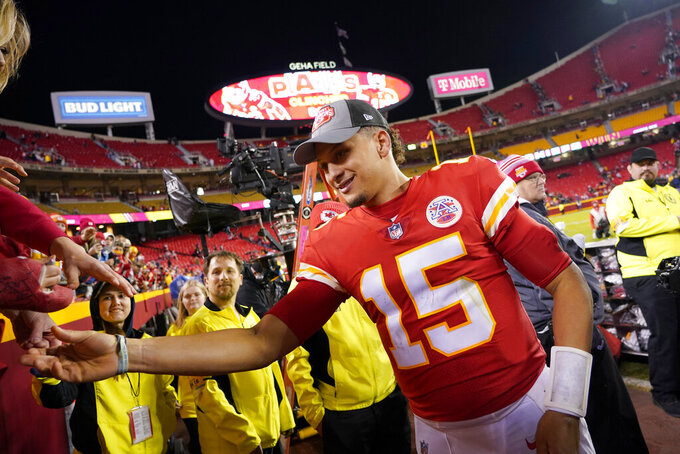 OPENING LINE: Chiefs by 5 1/2, according to FanDuel Sportsbook.

TURNOVER DIFFERENTIAL: Chiefs plus-3; Bengals minus-2.

BENGALS PLAYER TO WATCH: QB Joe Burrow is becoming must-see TV, especially after throwing for 525 yards and four touchdowns without an interception in a 41-21 blowout of the Ravens last week. He has five games of at least 300 yards passing, and he has seven TD passes without a pick in his past three games.

CHIEFS PLAYER TO WATCH: WR Tyreek Hill spent most of last week on the COVID-19 list before he was cleared to play against Pittsburgh the day before the game. He only had two catches for 19 yards. Expect him to have a much bigger impact against the Bengals.

KEY MATCHUP: Chiefs RBs Darrel Williams and Derrick Gore against the Bengals' run defense, which is fourth in the league allowing 92.1 yards per game. The Chiefs are counting on Williams and Gore without Clyde Edwards-Helaire, who hurt his collarbone last week.

KEY INJURIES: Edwards-Helaire is likely out with a shoulder injury. ... Bengals CB Jalen Davis (ankle) and DE Cam Sample (hamstring) did not practice early in the week.

SERIES NOTES: The Bengals had won four straight against Kansas City from 2008 to 2015, but they were blown out 45-10 in their most recent meeting in 2018. Chiefs QB Patrick Mahomes threw for 358 yards with four TDs in the victory.

STATS AND STUFF: The Chiefs clinched their their record sixth consecutive AFC West title last week. They are one game ahead Tennessee for first place in the race for the conference's top seed. ... The Bengals can clinch the AFC North with a win. ... The Chiefs have qualified for the playoffs eight times in nine seasons under Andy Reid. ... Reid will coach his 400th game on Sunday. The only other coaches to reach that milestone are Don Shula (526), George Halas (506), Bill Belichick (474) and Tom Landry (454). ... The Chiefs are trying for their fourth straight 12-win season, which would tie the third-longest streak in NFL history. ... Chiefs QB Patrick Mahomes is trying to win his 27th consecutive game as the starter in the months of November, December and January. He is 33-5 in his career in those months. ... Chiefs TE Travis Kelce has caught a pass in 124 straight games, the third-longest active streak in the NFL. He needs 134 yards receiving for a fourth straight 1,200-yard season, which would tie for the ninth-longest streak in NFL history. ... Hill needs two catches to break the Chiefs season record of 105 set by Kelce last season. ... DT Chris Jones needs 1 1/2 sacks to pass Art Still (48 1/2) for sixth in Chiefs history. ... Along with throwing for 525 yards last week, Bengals QB Joe Burrow also had career highs in passer rating (143.2), TD passes (four) and yards per attempt (11.4). His 941 yards in two games against the Ravens are the most against an opponent in a single season. ... Burrow needs 38 completions to break Carson Palmer's single-season franchise record of 373 set in 2007. He needs 129 yards passing and four TD passes to break Andy Dalton's records of 4,293 and 33 set in 2013. ... Bengals WR Ja'Marr Chase needs 278 yards receiving to pass Chad Johnson (1,440) for the most in a single season. ... RB Joe Mixon has 16 TDs this season, one shy of Bengals record set by Carl Pickens in 1995. Mixon's 13 TDs rushing are two shy of Ickey Woods' record set in 1988. ... Cincinnati leads the NFL in fewest penalties (63) and penalty yardage (526). ... The Bengals' defense is tied for second in the league in fourth-down efficiency (37.5%). It is also seventh with 41 sacks.

FANTASY TIP: You'd be foolish to sit Bengals WRs Chase and Tee Higgins in the fantasy playoffs, but there's reason to be nervous about them and Burrow. The Chiefs haven't allowed more than 250 yards passing in a game since Oct. 24 against Tennessee, and they haven't surrendered more than 300 yards since Oct. 10 against Buffalo.