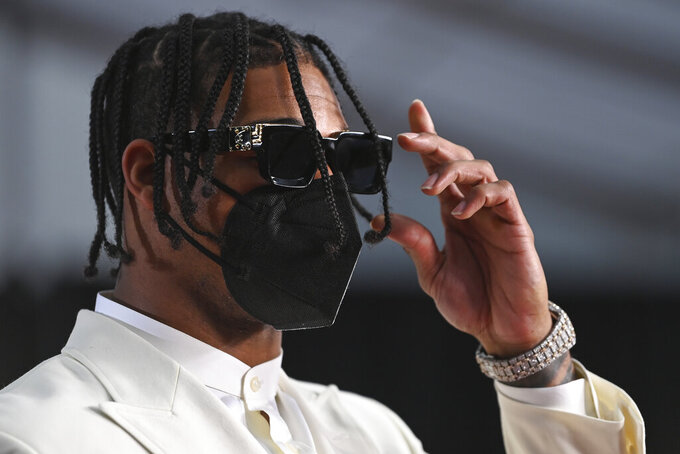 LSU wide receiver Ja'Marr Chase adjusts his glasses as he appears on the Red Carpet at the Rock & Roll Hall of Fame before the NFL football draft, Thursday, April 29, 2021, in Cleveland. (AP Photo/David Dermer, Pool)

CINCINNATI (AP) — Ja'Marr Chase didn't know if former LSU teammate Joe Burrow was being serious when the quarterback started telling him the Cincinnati Bengals planned to reunite the pair in the NFL.

Chase, the star LSU wide receiver chosen by the Bengals with the fifth overall pick in the NFL draft, said he thought it might actually happen when Burrow texted him Thursday morning and told him to pack his bags.

"I believed him," said Chase, who showed up on the draft stage in Cleveland with Bengals orange shoes, although he insisted that was nothing more than a style choice.

Chase and Burrow won the national championship together at LSU in 2019. Besides a player who will have instant chemistry with his quarterback, the pick gives the Bengals a potent offensive weapon and a legitimate deep threat that has been lacking.

“I'm going to break every record they have,” Chase said.

The 6-foot-1, 205-pound Metairie, Louisiana, native was considered one of the best receiver prospects in recent years. He’s got sub-4.4 speed in the 40 and plays like a bigger receiver on contested catches.

“Really, they’re not 50-50 balls when the ball is in the air -- he does such a phenomenal job of positioning his body and going up and making plays and then finishing plays off,” Bengals coach Zac Taylor said. “He’s got speed, he’s got good hands, but his ability to make that first man miss or break that first tackle to get additional yardage there is really exciting to watch.”

Cincinnati opted for Chase over Oregon tackle Penei Sewell, a player that many speculated the Bengals would grab first as they try to beef up their moribund offensive line. But the offensive line class is deep, and the Bengals are counting on getting a plug-and-play player later in the draft, possibly with their second-round pick, the 32nd overall, on Friday.

“That is a position we will continue to address, but we felt good about adding Ja'Marr with the fifth pick,” Taylor said.

He will likely line up alongside Tee Higgins, the team’s 2020 leader with 908 receiving yards and six touchdowns, and Tyler Boyd, who had 841 yards and four touchdowns.

“He's going to be one of the three receivers who will be on the field quite a bit,” offensive coordinator Brian Callahan said.

Burrow is working his way back after suffering a season-ending knee injury in Week 11 last year and having surgery to repair it. He was on his way to setting rookie passing records when he was injured, and Cincinnati finished 4-11-1.

Taylor said Burrow didn't actively lobby for Chase but made his feelings clear when Taylor approached him to ask for a briefing.

“I don't know that I needed a lot of convincing necessarily,” Taylor said. “I just said on a scale of one to 10, what would be your excitement level if we added Ja'Marr Chase — and he said 10. That's a pretty good answer.”

As expected, Sewell is off the board, the seventh overall pick by the Detroit Lions. So is Northwestern tackle Rashawn Slater, Alabama tackle Alex Leatherwood, USC guard Alijah Vera-Tucker and Virginia Tech tackle Christian Darrisaw, all first-round picks. But there other offensive linemen on the board who could make a difference immediately, and the Bengals are expected to go that route Friday.