Bills beat up on Jets with tough 6-week stretch looming 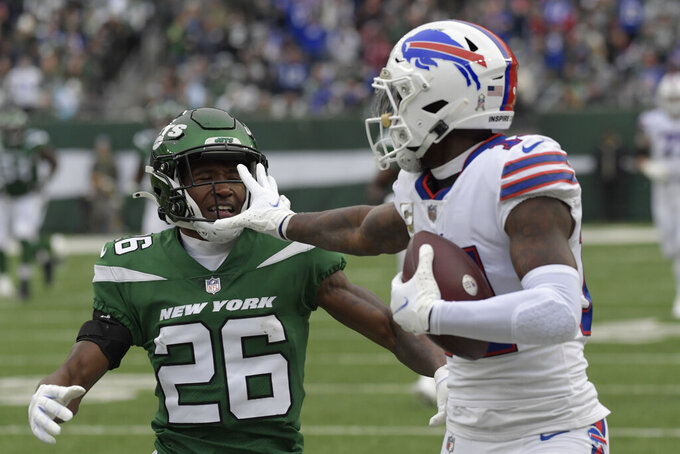 ORCHARD PARK, N.Y. (AP) — If Josh Allen refuses to ride the emotional roller coaster following a win or loss, then perhaps it’s also time to hold off judgment on how good — or mediocre — these Buffalo Bills might be this year.

Throttling the Jets 45-17, as Buffalo did on Sunday, is one thing, no matter what the Bengals might suggest after losing to New York two weeks earlier. The true test for the win-one, lose-one Bills, as they’ve done the past four games, comes over the next five weeks.

Having padded its 6-3 record against mostly NFL pushovers, Buffalo enters the meat of its schedule in facing six consecutive opponents currently at .500 or better, starting with Indianapolis (5-5) hitting town on Sunday. The stretch is rounded out by New Orleans (5-4), Tampa Bay (6-3), Carolina (5-5) and two games against New England (6-4), which will go far in determining whether the Bills will repeat as AFC East champions for the first time since a four-year run spanning 1988-91.

What’s evident through nine games is Buffalo’s defense continues to prove it’s for real after generating five takeaways against New York, while the offense is still searching for a consistent identity.

Beating the Jets was a good place to start, especially following the egg Allen and Co. laid in a 9-6 loss to Jacksonville the previous week.

A much-needed emphasis on running the ball allowed Allen to enjoy his most efficient outing of the season. After failing to top 300 yards passing with 30 or more attempts on four occasions this season, Allen went 21 of 28 for 366 yards with two touchdowns against New York.

The ground game found its legs in generating 139 yards rushing, with Allen accounting for just 3, and scored four times — the most since a four-TD rushing outing against San Francisco on Oct. 16, 2016.

Just as important, Allen rediscovered his connection with Stefon Diggs, who had eight catches for 162 yards and a touchdown. Diggs' yards receiving were the fifth most of his career, and most in 25 games with Buffalo.

“The point of emphasis this week was let’s get him the ball as early and often as possible,” Allen said of the 13 times he targeted Diggs.

The caveat is the Bills’ success came against a two-win opponent with an injury-depleted secondary, and an offense run by Mike White, who doubled his interception total from his previous three NFL appearance to eight on Sunday.

And the Bills can talk all they want about how they heard the noise, but didn’t press the panic button after losing to Jacksonville. The fact remains, the Bills still lost to Jacksonville in much the same fashion they lost to Pittsburgh in the season opener and at Tennessee last month. All three outings featured similar issues of an offense being too quarterback dependent, and a defense unable to create takeaways.

“We did a lot of soul-searching last week,” center Mitch Morse said. “And there’s a sense of urgency still because there’s a lot of football left and some great opponents.”

A pass defense which has an NFL-leading 15 interceptions and allowed six TDs passing, the fewest by Buffalo over the first nine games of a season since allowing six over the same span in 2005.

Consistency. In six wins, the Bills are averaging 38 points per outing as compared to 18 in three losses. The defense has 22 takeaways (including 14 interceptions), 15 sacks and limited opponents to converting 4 of 12 fourth-down opportunities in six wins. In three losses, the defense has two takeaways, four sacks and allowed opponents to convert all three fourth-down opportunities.

Active for the first time since Week 2, RB Matt Breida had 28 yards on three carries and a TD, and three catches for 22 yards and a TD.

None to report, though the Bills were missing starting LB Tremaine Edmunds (hamstring) and starting DT Star Lotulelei (COVID-19) on Sunday.

This story has been corrected to reflect Bills facing six-game stretch of playing teams with .500 or better records to include Carolina.