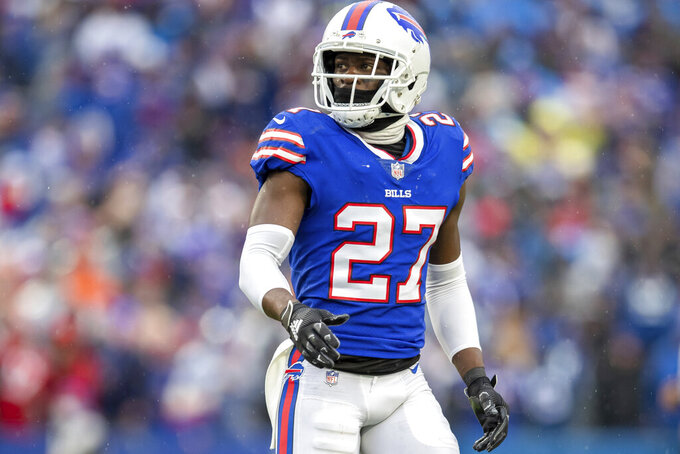 File - Buffalo Bills cornerback Tre'Davious White looks on during an NFL football game against the Indianapolis Colts on Nov. 21, 2021, in Orchard Park, NY. White will get at least another month to rehab from a left knee injury after being placed on the reserve-physically unable to perform list on Tuesday, Aug. 30, 2022. (AP Photo/Jeff Lewis, File)

ORCHARD PARK, N.Y. (AP) — Buffalo Bills starting cornerback Tre’Davious White will get at least another month to rehab from a left knee injury after being placed on the reserve-physically unable to perform list on Tuesday.

The move was made as Buffalo met the NFL’s deadline in trimming its roster to a maximum 53 players. The designation means the sixth-year player will not be allowed to begin practicing or playing until the start of Week 5.

Minus White and following the offseason departure of Levi Wallace, the Bills have two starting cornerback spots to fill in preparing to open the season at the Los Angeles Rams on Sept. 8.

One of the jobs will go to Dane Jackson, who closed last season starting in place of White. The other spot will be filled by either rookie first-round pick Kaiir Elam or sixth-rounder Christian Benford, who split training camp and three preseason games working with the starters.

White opened training camp on the PUP list, and has been out since blowing out his left knee while in coverage in a 31-6 win at New Orleans on Nov. 25. Though he worked out on his own on the sideline during training camp, White was still walking with a noticeable limp.

“I know people want answers. Candidly, we don’t have the final answer,” Beane said, while noting the Bills also don’t intend on rushing White back on the field.

Safety Jordan Poyer, meanwhile is scheduled to be ready after missing much of the past month recovering from a hyperextended left elbow. Poyer resumed practicing with the team on Saturday and said he is eager to play.

Buffalo, meantime, has a hole to fill on its roster at punter after releasing rookie Matt Araiza on Saturday, two days after a civil lawsuit was filed, alleging he was involved with other San Diego State players in a gang rape of a teenager last fall.

Among the Bills most notable players cut were tight end O.J. Howard, a sixth-year player who signed with the team in free agency, and another offseason free-agent addition, running back Duke Johnson.