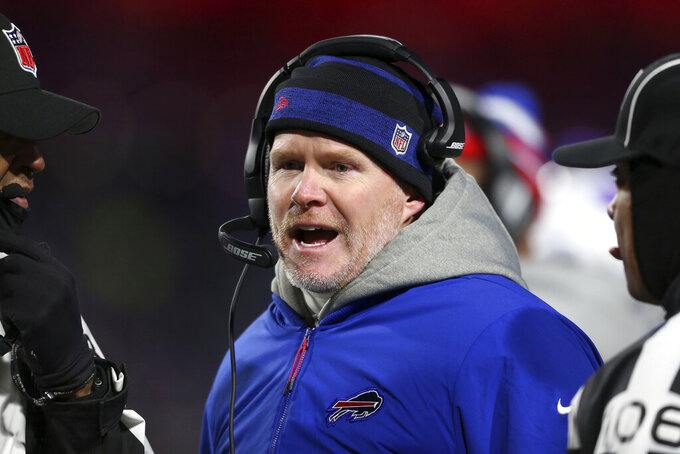 BETTING LINE: Buffalo by 10 1/2, according to FanDuel SportsBook.

TURNOVER DIFFERENTIAL: Panthers minus-8; Bills plus-8

PANTHERS PLAYER TO WATCH: QB Cam Newton. The 2015 league MVP has turned over the ball five times in Carolina’s last two games and is 0-3 as a starter since rejoining the team. Coach Matt Rhule has stressed that Newton needs to avoid the “catastrophic turnovers” which have been plaguing the team. Carolina has 18 turnovers in its eight losses this season.

BILLS PLAYER TO WATCH: WR Gabriel Davis. With Emmanuel Sanders likely sidelined by a knee injury, Davis is considered an upgrade in reclaiming the No. 3 job he held for most of his rookie season in 2020. Davis had a season-high five catches for 43 yards and scored his fourth TD of the year while replacing Sanders against Tampa Bay.

KEY MATCHUP: Carolina O-line vs. Buffalo D-line. Bills coordinator Leslie Frazier’s concerns with his defense being unable to apply pressure with a four-man rush could be solved against a line which has featured nine combinations of starters this season. Though Newton has only been sacked three times in three starts, the Bills got to him five times in two games with New England last year.

KEY INJURIES: Panthers WR D.J. Moore has been limited in practice this week, but is expected to play after tweaking his hamstring last Sunday. The Panthers expect to get starting guards John Miller (ankle) and Michael Jordan (hamstring) back after both were inactive last week. CB A.J. Bouye (foot) could miss this week’s game. With No. 1 CB Donte Jackson already out for the season, it could leave the Panthers’ No. 1 ranked pass defense vulnerable. ... QB Josh Allen will start after spraining his left foot against Tampa Bay last weekend. LT Dion Dawkins' status is uncertain after he was placed on the reserve/COVID-19 list on Friday. Sanders is listed week to week after hurting his knee on Sunday. DT Star Lotulelei’s status is uncertain with a toe injury that forced him to miss last weekend. DE Jerry Hughes landed on the injury report with a foot issue.

SERIES NOTES: The Bills are 3-1 at home against the Panthers. ... Four of the seven meetings have been decided by six or fewer points, including two by one point between the non-conference foes.

STATS AND STUFF: Bills coach Sean McDermott faces his former team for the second time since taking over in Buffalo in 2017. McDermott was Panthers defensive coordinator from 2011-2016. Bills GM Brandon Beane worked his way up the Panthers' executive ranks over a 19-year stint before being hired by Buffalo in 2017. ... The Panthers are the NFL’s only team to not allow an opponent to score an opening-drive TD, and the Bills are 5-0 when scoring a TD on their opening drive. ... Carolina has lost eight of its past 10. and is 3-3 on the road. ... Newton has lost 11 straight starts for Carolina dating to the 2018 season. Newton is expected to split snaps again this week with P.J. Walker, per Rhule. ... The Panthers are 28th in the league in third-down efficiency (34.9%). ... Rookie RB Chuba Hubbard scored his fourth touchdown rushing of the season last week. ... Moore needs 62 yards receiving for a third consecutive 1,000-yard season. Since 2019, Moore ranks fifth in NFL with 3,306 yards receiving. ... WR Robby Anderson is coming off a season-high seven catches for 84 yards and a touchdown. ... Panthers S Jeremy Chinn had 13 tackles last week and is one of two defensive backs in the NFL with at least 90 tackles. Derwin James is the other. ... Panthers K Zane Gonzalez has made 17 straight field goal attempts and has not missed since Oct. 3 at Dallas. ... The Bills have dropped three of four and five of eight. ... Buffalo hasn’t lost three straight since a four-game skid in 2018 coinciding with Allen being sidelined with a sprained throwing elbow. ... Except for being routed 41-15 by Indianapolis on Nov. 21, Buffalo’s five other losses have been decided by a combined 23 points. ... Since 2020, Allen is averaging 330 yards passing and 3.3 TDs in seven outings (6-1) against NFC opponents. ... Allen has committed a turnover in six straight contests (eight interceptions, two lost fumbles) versus scoring 12 times, including one rushing. He has a career record of 18-17 in the regular season when committing a turnover. ... WR Stefon Diggs is set to appear in his 100th career game. He leads Buffalo with 78 catches for 972 yards and seven touchdowns, and seeks to join Eric Moulds as the Bills' only players to have 80 receptions in consecutive seasons. ... The Bills have converted 6 of 26 third-down chances in their past two games following a streak of 20 consecutive games of a 40% conversion rate or better. ... S Jordan Poyer tied a season high with 10 tackles last week, and has a tackle for a loss in four of five home games. ... In seven wins, Buffalo’s defense has forced 23 takeaways (15 interceptions, eight fumbles) and 17 sacks. In six losses, the defense has forced three takeaways (an interception, two fumbles) and six sacks.

FANTASY TIP: It might be time to consider starting Bills RB Devin Singletary against a Panthers' run defense that has allowed a combined 429 yards rushing in its past three outings. Singletary had 52 yards rushing against Tampa Bay, his most in nine games.