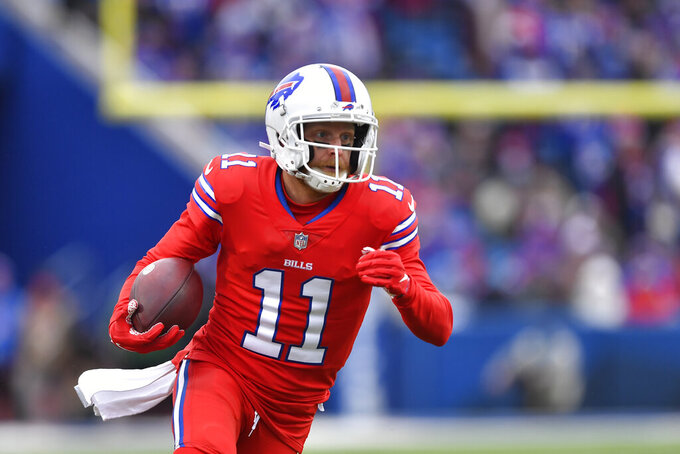 FILE - Buffalo Bills wide receiver Cole Beasley (11) runs the ball in the first half of an NFL football game against the Carolina Panthers, Sunday, Dec. 19, 2021, in Orchard Park, N.Y. Beasley can forget trying to negotiate a trade out of Buffalo now that he’s a free agent after being cut by the Bills on Thursday, March 17, 2022. (AP Photo/Adrian Kraus, File)

ORCHARD PARK, N.Y. (AP) — Cole Beasley can forget trying to negotiate a trade out of Buffalo now that he’s a free agent after being cut by the Bills on Thursday.

The Bills made the move to cut their top slot receiver to free up salary cap space a day after making a huge splash in free agency by signing two-time NFL Defensive Player of the Year Von Miller to a six-year contract.

Beasley’s tenure in Buffalo was already in question with his release coming two weeks after the Bills granted the 10th-year player permission to negotiate a trade. Beasley had one year left on a four-year contract he signed with Buffalo as one of the team’s key free-agent additions in 2019 after spending his first seven seasons in Dallas.

His departure further drains Buffalo’s depth at receiver behind Stefon Diggs, with Emmanuel Sanders entering free agency and having yet to determine whether he’ll retire. Gabriel Davis returns for a third season and Buffalo re-signed Isaiah McKenzie to a two-year contract on Monday.

Though Beasley finished the season with a career-best-matching 82 catches for a second consecutive year, his production dropped from 967 yards receiving and four touchdowns in 2020 to 693 yards and one TD this past season.

Beasley's final season with Buffalo will also be remembered for him being one of the league’s most vocal anti-vaccination critics last summer. He most notably threatened to retire in June after questioning the NFL and NFLPA jointly adopting rules requiring unvaccinated players to stay clear of people.