Bills driven to 'find a way' after latest playoff collapse 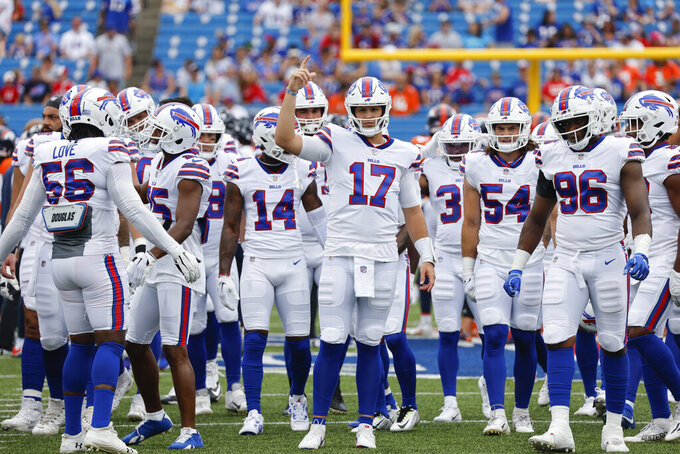 ORCHARD PARK, N.Y. (AP) — Each morning on their way to practice, the Buffalo Bills were greeted by a large banner hanging off the back of the stands at their training camp facility.

Emblazoned in large red letters on a blue backdrop were the words: “Find A Way.”

It was a phrase quarterback Josh Allen used during his camp-opening news conference, and repeated by others to reflect a team that’s made great strides in reaching the playoffs in four of five years since coach Sean McDermott and GM Brandon Beane took over, while still falling short of its desired destination.

It’s also a reminder of how close Buffalo came in each of the past two seasons before being eliminated by Kansas City in the AFC championship game two years ago, and the AFC divisional round in January.

“It’s really nothing separating these teams besides a play or two,” defensive tackle Ed Oliver said, referring to the divisional round of the playoffs last year in which all four games were decided by six or fewer points.

It couldn’t have gotten any closer for the Bills last year in an outcome since dubbed “13 Seconds.” That’s how much time was left on the clock when Buffalo squandered a three-point lead in an eventual 42-36 loss in overtime.

It’s a game which stands as a stark reminder of how one decision — whether to kick off short rather than into the end zone — or one stop — defensive end Jerry Hughes was a step short from sacking Patrick Mahomes on the Chiefs' final drive of regulation — could have made the difference.

The memories linger even though the Bills are getting tired of hearing about it, and with McDermott refusing to go into any detail on what went wrong in such a short span of time.

What matters is this season, with the two-time defending AFC East champion Bills locked in at 6 to 1 as Super Bowl favorites.

They have an Allen-led offense that returns mostly intact with the exception of first-time coordinator Ken Dorsey, who was promoted from quarterbacks coach in taking over after Brian Daboll was hired to coach the New York Giants.

And Buffalo’s defense, which led the league in numerous categories last season, has been retooled with the addition of Von Miller, the NFL’s active leader in sacks, to muscle up what had been a middling pass rush.

The roster is so deep, Beane was able to target his top need in the draft by selecting cornerback Kaiir Elam in the first round, before focusing on skillset alone in filling out the rest of his picks. They included a dynamic running back in James Cook, a second-round pick, and using a sixth-round selection on punter Matt Araiza, who has won the job over returning veteran Matt Haack.

Now it’s a matter of proving it on the field with Buffalo opening its season at the defending Super Bowl champion Los Angeles Rams on Sept. 8.

Center Mitch Morse voiced sympathy for opposing lines having to face a defensive line made up of Miller and Oliver, who was a disruptive presence in the middle against the pass and run last season.

“It’s an embarrassment of riches almost,” Morse said. “If you ever put (Miller) on the same side as Ed, it’s a little bit like cheating.”

Bills practices featured a large number of skirmishes between players, including Allen attempting to take on Jordan Phillips after the hulking defensive tackle nudged the quarterback on a run play.

“I was probably in the wrong,” Allen said, noting he bought Phillips a box of golf balls as an apology.

“It was just one of those things,” Phillips said. “I’m not surprised what Josh did. He’s a fiery guy.”

Cornerback Tre’Davious White is on track in his recovery from a season-ending left knee injury sustained in November, but there’s no indication of when he'll be cleared for practice. Beane is going to wait until the final cutdown day to determine whether White will make the 53-player roster or remain on the physically unable-to-perform list, which would force him to miss the first four weeks of the season.

If he’s not ready, and following the offseason loss of Levi Wallace, the Bills will likely go with a starting tandem of Elam and Dane Jackson, a third-year player who closed last season starting for White.