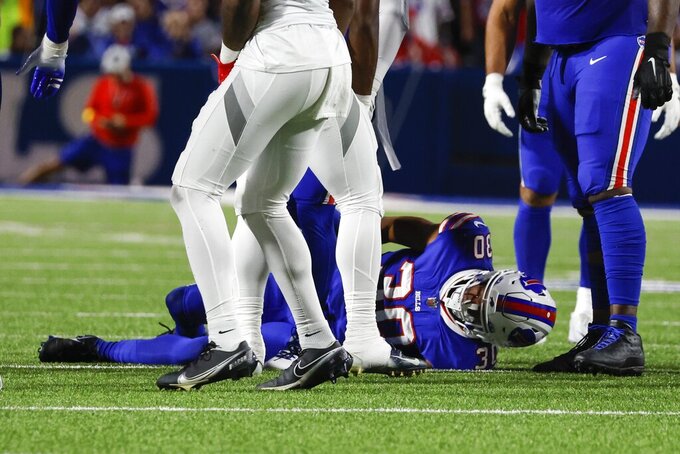 Buffalo Bills cornerback Dane Jackson (30) reacts after an injury during the first half of an NFL football game against the Tennessee Titans, Monday, Sept. 19, 2022, in Orchard Park, N.Y. (AP Photo/Jeffrey T. Barnes)

However it couldn’t compete with the width of Dane Jackson’s smile.

In a little more than a week, the Bills starting cornerback went from feeling helpless in having his head immobilized while being rushed to the hospital by ambulance, to returning to practice.

And maybe, just maybe, Jackson might be able to play on Sunday, when the injury-thinned Bills (2-1) travel to face the Baltimore Ravens (2-1).

“I’m here. I’m alive. I’m standing. Everybody seen the hit. They know it could’ve been a lot worse,” Jackson said, referring to how his head viciously snapped back after being struck by teammate Tremaine Edmunds in a 41-7 win over Tennessee on Sept. 19.

“Just for me to be here, nothing structural, walking, back in the locker room with my teammates, this is a blessing,” he added. “I can’t do nothing else but smile.”

As for the possibility of playing, Jackson wouldn't rule it out in saying he's taking things day by day after practicing in a red non-contact jersey.

Coach Sean McDermott expressed caution by saying he’ll ramp up Jackson’s practice time each day so long as there are no setbacks.

Jackson’s mere presence on the field was a welcome sight for the Bills in more ways than one, beginning with the relief players expressed in seeing their teammate healthy.

“He’s got some angels over him for sure,” pass rusher Von Miller said, noting he eventually exchanged jokes with Jackson by saying he must have the neck of a Slinky. “It’s just a true blessing that he was able to come out all right.”

Edmunds told The Associated Press he’s stayed in touch with Jackson each day since the collision, in which the linebacker dived in and struck Jackson in the helmet after the cornerback tackled Titans receiver Treylon Burks.

“It’s good to see him out with a smile on his face, and back playing the game he loves,” Edmunds said.

The Bills could use some encouraging news after releasing an injury report that listed 15 players, seven of whom did not practice.

The team is particularly thin in the secondary.

Aside from Jackson, a third-year player who opened the season starting in place of Tre’Davious White (left knee), rookie starter Christian Benford has already been ruled out after breaking his hand in a 21-19 loss at Miami on Sunday. Backup cornerback Cam Lewis was limited in practice because of injuries to his forearm and knee.

Starting safety Micah Hyde was placed on the season-ending reserve-injured list last weekend, while fellow starter Jordan Poyer’s status is uncertain because of a foot injury.

That leaves open the prospect of Buffalo starting a patchwork secondary for a second straight week, and against a Lamar Jackson-led offense which has scored an NFL-leading 99 points.

“I feel no pressure at all. I’ve got some good guys around me. I trust those guys,” Johnson said. “I feel like they’ve played a little bit now, so they know what to expect.”

The defense held up for the most part in limiting the Dolphins to 212 yards, and Tua Tagovailoa to 186 yards passing. The only notable breakdown came in the fourth quarter, when Tagovailoa hit Jaylen Waddle for a 45-yard pass on third-and-22 to set up the Dolphins’ go-ahead score.

The performance left veteran cornerback Xavier Rhodes impressed while watching from home before being signed to the Bills practice squad on Wednesday.

“As a young group, you usually mess up and make multiple errors. But it was just one,” Rhodes said. “That’s a sign of being good. Those guys are actually listening, actually paying attention in meetings and coaches communicating and teaching them where they need to be and how they need to be.”

Rhodes is a nine-year veteran and has been without a team since his contract expired with Indianapolis in March. The 32-year-old isn’t sure if he’ll be ready to suit up this weekend.

“I’m trying to cram it all in and get my feet wet, and we’ll see,” Rhodes said.

For Jackson, he said it felt as if he’d missed a month since last putting on pads.

Also on Jackson’s mind were the panicky feelings of uncertainty he had of not knowing the severity of the injury while being loaded into the ambulance.

“I was worried about my son at home, my mom. I know everybody was crying. My girl was right next to me. So it was an emotional roller coaster,” Jackson said, noting his girlfriend accompanied him in the ambulance. “It was a lot of emotions running through my mind. And I’m just happy I’m OK.”