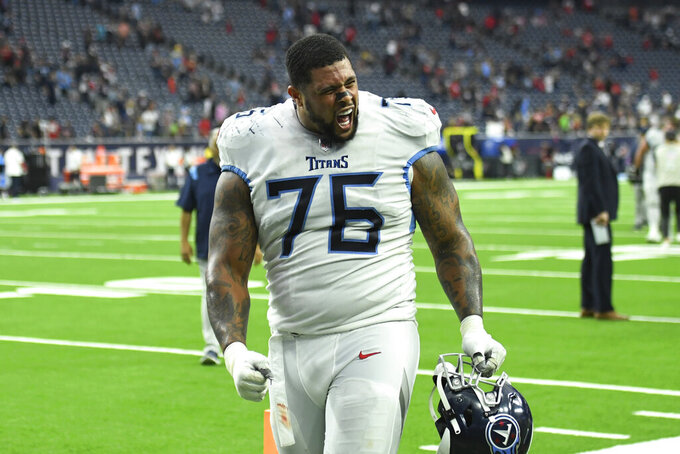 FILE - Tennessee Titans guard Rodger Saffold (76) celebrates with fans after a win over the Houston Texans in an NFL football game, Sunday, Jan. 9, 2022, in Houston. Saffold, now with the Buffalo Bills, is so happy to be back practicing since recovering from rib injuries sustained in a car accident, the veteran offensive lineman doesn’t mind being used as “a dummy.” That’s the term Saffold used in explaining how Buffalo’s new offensive line coach Aaron Kromer is leaning on him to visually display various new techniques. (AP Photo/Justin Rex, File)

ORCHARD PARK, N.Y. (AP) — Rodger Saffold is so excited to be back practicing since recovering from rib injuries sustained in a car accident, the Buffalo veteran offensive lineman doesn’t mind being used as “a dummy.”

That’s the term Saffold used on Sunday in explaining how Buffalo’s new offensive line coach Aaron Kromer is leaning on the 13-year veteran to visually display various new techniques to his teammates. Though Saffold is new to Buffalo after signing with the team this offseason, he feels more at home after having played under Kromer when their careers overlapped with the Los Angeles Rams from 2017-18.

“It’s been an easy transition,” Saffold said. “It’s actually been easier than I ever though it could be.”

The only thing to have slowed the 34-year-old's bid to fill the starting job at left guard is a car accident he was involved in before the start of training camp last month.

Speaking to the media for the first time this summer, Saffold declined to go into much detail by calling it a traumatic experience. He would only say the crash happened in Los Angeles, where he has an offseason home, and that no one was seriously injured.

Saffold said he didn’t realize the extent of his rib injuries until he arrived in Buffalo and began working out at the team’s facility last month. He missed the first two weeks of training camp before being activated from the non-football injury list on Aug. 7.

With 157 starts in 160 career games, Saffold doesn’t believe it will take long to make up for the time he’s lost.

Aside from his ties to Kromer, Saffold also has a connection to left tackle Dion Dawkins after the two worked out and played together at the Pro Bowl this offseason.

Buffalo's projected starting offensive line is gradually taking shape. Aside from Saffold missing time, right guard Ryan Bates missed several practices, while right tackle Spencer Brown was gradually eased into the mix after having offseason back surgery. The only constant on the line has been center Mitch Morse.

It’s unclear if members of the starting five will see any preseason action after sitting out Buffalo’s 27-24 preseason-opening win over Indianapolis on Saturday.

It makes no difference to Saffold whether he plays or not before the Bills open the season at the Rams on Sept. 8.

“I’ve had no preseason games, I’ve done all the preseason games ... and to be honest, I’ve done this so many times you know how to make yourself ready,” said Saffold, who spent his first nine NFL seasons with the Rams and the previous three in Tennessee.

Impressive as Bills rookie Matt Araiza’s 82-yard punt was against the Colts, coach Sean McDermott is far from ready to award him the job ahead of returning veteran Matt Haack.

“That was good, and I’m not dismissing it. It was a great punt, but it was one punt,” McDermott said.

The coach then turned the attention to Haack by noting the fifth-year player deftly landed a 38-yard punt at the Colts 12 in the first quarter.

Araiza is a sixth-round pick out of San Diego State, where he earned the nickname “Punt God” for his booming left leg. His 82-yarder happened in the final minute of the second quarter, with the ball sailing over the head of Colts returner Phillip Lindsay before dribbling over the goal line for a touchback.

McDermott said receiver Marquez Stevenson could miss the start of the season after having surgery last week to repair a foot injury. ... McDermott said starting safety Jordan Poyer (hyperextended left elbow) has the potential of returning to practice after the Bills host Denver in a preseason game on Saturday. Poyer was hurt on Aug. 2. ... Backup OT Tommy Doyle watched practice wearing a protective boot on his left foot after being hurt against Indianapolis.

By Teresa M. Walker 41 minutes ago
By John Marshall an hour ago
By Greg Beacham 2 hrs ago
By Tom Withers 2 hrs ago
By Rob Maaddi 3 hrs ago