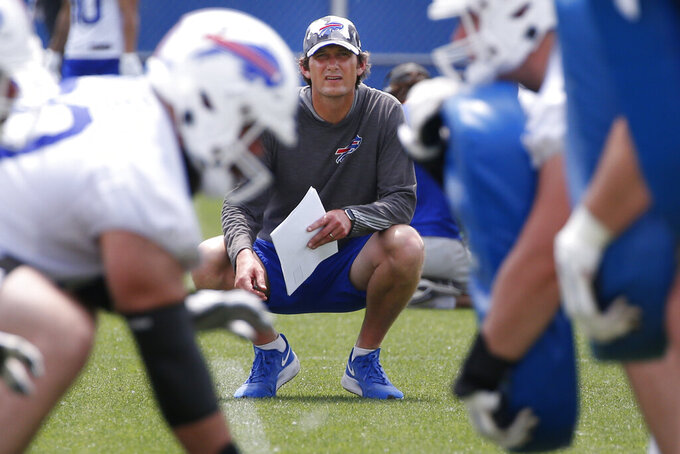 FILE - Buffalo Bills offensive coordinator Ken Dorsey looks on during the NFL football team's mandatory minicamp in Orchard Park, N.Y., on June 15, 2022. Dorsey has the self-awareness to understand the gravity of the role of being a first-time coordinator and overseeing a high-powered Josh Allen-led Buffalo Bills offense . (AP Photo/Jeffrey T. Barnes, File)

PITTSFORD, N.Y. (AP) — While most are focused on how the Buffalo Bills’ Josh Allen-led attack will function under Ken Dorsey, the newly promoted offensive coordinator can be found pacing the sideline at practice.

Dorsey is a man in constant motion during team drills. Stopping long enough to watch each play unfold to its completion, he’ll turn and walk away while consulting his play sheet, before abruptly turning back to call the next play over his headset.

It's a back-and-forth march in which the lean, long-striding, 6-foot-4 Dorsey covers some 20 yards between plays.

That might be true for someone who has spent much of his coaching career roaming the sideline and doesn’t like confined spaces, which is why Dorsey has yet to determine where he’ll be situated — in the booth or on the field — on game days.

And it provides insight into the nervous energy Dorsey expends in carrying the weight of being a first-time coordinator inheriting what’s been one of the NFL’s most productive offenses on a team entering the season with Super Bowl aspirations.

“Yeah, you know, the built-up angst,” Dorsey told The Associated Press, before bursting into a laugh.

At 41, Dorsey is self-aware enough to appreciate the gravity of stepping into his new position. He spent the previous three seasons as Buffalo's quarterbacks coach before being promoted to replace Brian Daboll, who was hired to take over the New York Giants in January.

What’s also true is Dorsey sometimes being under-estimated when entering the spotlight.

It happened in college at Miami, where Dorsey wasn’t coach Butch Davis’ initial choice as the Hurricanes’ starter. In replacing Kenny Kelly during his freshman season, Dorsey went on to post a 38-2 record, help Miami win the 2001 season national championship and become a two-time Heisman Trophy finalist.

And even then, Dorsey’s achievements were mostly overshadowed by a roster made up of future NFL stars such as running backs Clinton Portis and Frank Gore, receivers Santana Moss and Reggie Wayne, safety Ed Reed, defensive tackle Vince Wilfork and linebacker Jonathan Vilma.

As he did at Miami, Dorsey puts his ego aside and places his faith in the team.

Dorsey, who makes his play-calling debut in Buffalo's preseason opener against Indianapolis on Saturday, benefits from having a hand in designing Daboll’s offense, and being familiar with the strengths and weaknesses of the returning players.

Just as important is having the support of Allen, who openly campaigned for Dorsey to take over.

“I trusted Daboll with my life, and I think I’d be willing to say the same thing for Dorsey,” said Allen, who spent his first four seasons playing under Daboll.

“He’s going to be nails for us,” he added. “I count my blessings every day that we did promote him.”

Dorsey is a known commodity among the Bills brain trust given his previous role as the Carolina Panthers quarterbacks coach, where he helped develop Cam Newton. Buffalo's GM Brandon Beane, coach Sean McDermott and newly hired senior offensive assistant Mike Shula are among those who worked for the Panthers at that time.

The challenge is for Dorsey to gain everyone else's trust on a talent-laden offense that's set most every single-season franchise scoring and passing record, and ranks second among NFL teams in having combined to score 112 touchdowns over the past two years.

Though there will be some tweaks, Dorsey has no intention of reinventing the offensive wheel in Buffalo.

The one area the Bills struggled under Daboll was establishing a ground attack beyond Allen’s scrambling ability and designed quarterback runs.

“At the end of the day, you just gotta do it,” he said of decisive play calling during a game. “Can I put a finger on right now, like, `Hey, this is exactly what I’m going to be?′ No. You’ve got to go out and do it and just get into a rhythm of calling plays on your own.”

The one impression Dorsey has already made on players is having a fiercely competitive personality in which he's been known to occasionally erupt when things go wrong.

“Yeah, the Holy Spirit comes out of him every once in a while, and it’s kind of fun to see,” center Mitch Morse said. “But it comes from a good place. It’s never malice. It’s just that he wants to succeed so badly.”

Dorsey doesn't deny having a fiery streak. It stems in part from his days at Miami, where the battle for starting spots was intense and winning expected. He doesn’t see a need to change his approach, noting he expects the same from himself and the Bills players today.