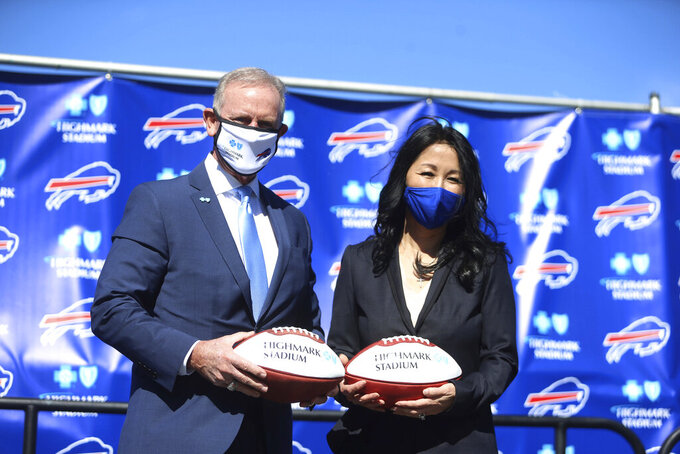 BUFFALO, N.Y. (AP) — With a revised stadium feasibility study in hand, the Buffalo Bills are preparing to open discussions with state and local governments to determine whether to renovate the current facility or build a new home either near the existing suburban site or downtown.

“We’re ready to have the conversation,” Pegula Sports and Entertainment executive vice president Ron Raccuia told The Associated Press by phone on Tuesday.

“We hope to start quickly. Obviously, this is Easter Week and New York state is finalizing its budget. So those are two factors,” he added. “If we have to go to Albany or if Albany’s coming to us, or we’re going to Zoom, we’ll figure it out.”

Buffalo-based PSE is the umbrella company which oversees Terry and Kim Pegula’s numerous holdings, including the Bills and the NHL's Sabres.

The PSE-funded feasibility study was initially launched in November 2018, and conducted by CAA ICON, a consulting firm, and Populous, an architectural firm. Initially completed more than a year ago, the findings have since been revised to take into account the economic challenges presented by the coronavirus pandemic.

Since opening in 1996, the arena has had no major renovations and was considered to have “fallen behind modern standards” when it came to structural renovations and upgraded amenities.

The future of the Bills home, however, is expected to carry a far heftier price tag no matter which option is determined best for a franchise based in one of the NFL’s smallest markets. The larger question is how the costs would be split between public and private money.

"We have to have those conversations with the state and county first,” Raccuia said.

Terry Pegula has previously stressed the Bills will take into account how much the local economy can bear in whatever option is chosen.

“We have the interest of our fans at heart, and what we do will be heavily weighted — whatever the plan is — toward the benefit of our fans,” Pegula told The AP in June 2019.

A new stadium alone would cost approximately $1 billion, whether it was built near the existing facility in Orchard Park or at a downtown site.

A stadium site selection study conducted by AECOM Technical Services in 2014 projected it would cost $540 million for the next series of renovations, including structural improvements and rebuilding the stadium’s third deck.

The study based its estimates on what it cost the Green Bay Packers and Kansas City Chiefs to extensively renovate their facilities over the previous decade.

And that cost is on top of the $130 million in renovations that took place in 2014, plus the $18 million the Pegulas spent on club seat upgrades three years ago.

Though the Bills have full operative control of the stadium and its surrounding land, the state and county play a role in holding the lease, which currently runs through the summer of 2023.

The Bills aren’t in jeopardy of relocating since the Pegulas purchased the franchise for a then-NFL record $1.4 billion from the estate of late Pro Football Hall of Fame owner Ralph Wilson in 2014. One likely scenario would have the Bills renew the existing lease on a year-to-year basis if it’s determined a new stadium is necessary.

As the NFL’s only New York-based franchise, the Bills in 2013 were estimated to generate $20 million annually in state taxes.