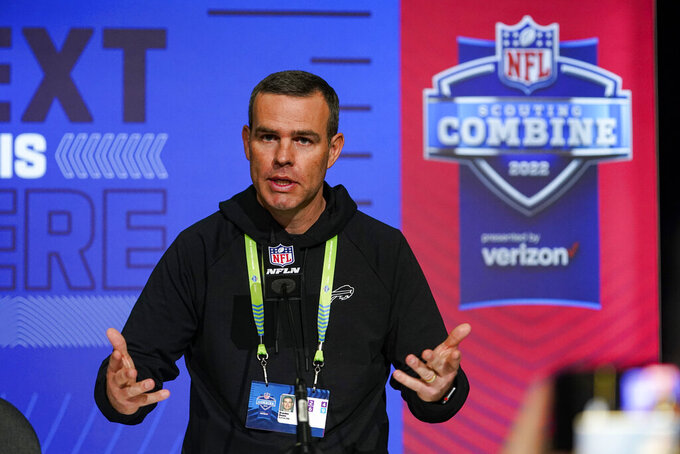 FILE - Buffalo Bills general manager Brandon Beane speaks during a press conference at the NFL football scouting combine in Indianapolis, Tuesday, March 1, 2022. Beane has a decision to weigh as to whether to stick with the players he’s familiar with or plug the team’s needs in free agency, and with little room to maneuver under the salary cap. (AP Photo/Michael Conroy, File)

And center Mitch Morse is staying in place, after agreeing to a two-year contract extension which locks up the seventh-year player through the 2024 season. Morse had one year remaining on a four-year contract he signed with Buffalo in free agency after spending his first four seasons in Kansas City.

Saffold joined the Bills after being cut for salary cap-related reasons by the Tennessee Titans last week. He’s coming off a season in which he earned his first Pro Bowl selection, and has spent a majority of his 12 NFL seasons playing guard.

The 33-year-old told reporters on a Zoom call that he’s being pegged to take over at left guard.

The moves coincide with changes to the offensive staff after coordinator Brian Daboll was hired to coach the New York Giants in January. Ken Dorsey was promoted to coordinator, while Aaron Kromer was hired as offensive line coach to replace Bobby Johnson, who joined Daboll in New York.

Kromer was previously Saffold’s position coach, when the two were together with the Rams in 2017 and ’18. Saffold spent his first nine seasons with Rams after being selected in the second round of the 2010 draft.

The Bills freed up approximately $5.5 million in cap space by releasing Williams, who had two years left on a contract extension he signed last offseason. He played at right tackle and right guard, starting all 17 games last season and 33 overall in two years with Buffalo.

Buffalo had about $8 million of space available under the salary cap before signing Saffold, and is expected to free up additional space before the NFL's free agency signing period opens on Wednesday.