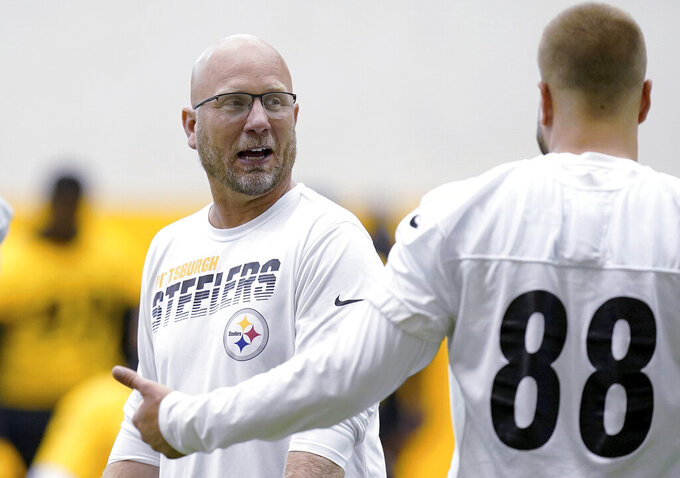 PITTSBURGH (AP) — A year ago, the limitations of the Pittsburgh Steelers' offense were placed firmly at the feet of 39-year-old Ben Roethlisberger and an offensive line that struggled to protect a likely Hall of Famer gamely raging against the dying of the light.

Things were supposed to be different in 2022.

The Steelers overhauled the line for a second straight season, brought in a pair of quarterbacks in Mitch Trubisky and Kenny Pickett capable of extending plays with their legs and added another deep threat in second-round pick George Pickens.

One of the few constants? Offensive coordinator Matt Canada. Free to construct an offense on his terms after spending 2021 searching for common ground with Roethlisberger — with very mixed results — Canada instead appears to have made little if any changes to the plan that saw the Steelers sneak into the playoffs last fall almost in spite of an offense that finished in the bottom third of the NFL in nearly every major statistical category.

And this time, Pittsburgh doesn't have an 18-year veteran to consistently smoke-and-mirror the Steelers out of tight situations. What they do have is a journeyman in Trubisky who is trying to fend off Pickett for as long as he can, but doing it while looking too terrified to take a single mistake lest the chants of “Kenny! Kenny” reverberate around Acrisure Stadium.

Too late for that.

Trubisky's honeymoon ended about two hours into his home debut. The same crowd that gave the second overall pick in the 2017 draft a warm ovation when he was introduced booed him in the third quarter with the offense sputtering for a second straight week.

The jeers subsided briefly when he led a touchdown drive operating primarily out of the no-huddle that ended with a 7-yard touchdown pass to Pat Freiermuth that drew the Steelers within three, only to re-emerge after Pittsburgh failed to record a single first down on its final two drives with the game there for the taking.

Trubisky is averaging 5.1 yards per attempt through two weeks, ahead of only injured Dallas starter Dak Prescott and well behind the 6.2 yards Roethlisberger averaged last fall.

Tomlin stressed on Monday he's in no mood to enter a debate on who deserves the blame, calling it a collective failure. Maybe, the debate is raging anyway in his locker room.

Center Mason Cole wondered aloud Monday if the offense has an identity. Trubisky said Sunday that putting together call concepts that open up the middle of the field — a place he's been loathe to test — would help but also stressed the Steelers had to “stick to the plan.”

What exactly the plan is, however, remains unclear.

Is Trubisky — who won the job in part because he didn't turn the ball over during the preseason — being too safe? Is the line still a mess? Is Canada conceiving game plans short on imagination in an effort not to “win” games as much as not “lose” them?

The reality is it's likely a combination of all three. Tomlin acknowledged Trubisky “could” make a more concerted effort to look downfield and pointed out there were times Sunday when it appeared receivers had favorable matchups only to see Trubisky check it down to a less-risky throw.

Tomlin declined to single out Canada's scheme, saying “I’m not happy with much of anything when we just lost a game" and preached patience.

It's two games. It's not a season. A year ago the Steelers started 1-3 with similar issues and found a way to reach the playoffs thanks in large part to All-Pro linebacker T.J. Watt and one last flurry of late-game heroics by Roethlisberger.

Watt is out indefinitely with a left pectoral injury. Roethlisberger spent Sunday as a fan. If the offense doesn't accelerate its learning curve, there's a good chance Trubisky and Canada will be on the outside looking in sooner rather than later.

Finding ways to let Minkah Fitzpatrick trust his instincts. The star safety picked off a pass for the second straight week and has effectively shut down whatever side of the field he lines up on during a given play.

Pickens was the star of training camp and a more than capable replacement for JuJu Smith-Schuster, who left for Kansas City in free agency. Through two weeks, Pickens has six targets and just two catches for 23 yards.

Inside linebacker Myles Jack looks worth every penny of the two-year, $16 million contract he signed in free agency. While 2019 first-round pick Devin Bush continues to be an enigma, Jack appears every bit the disruptor he was during his best seasons in Jacksonville. Jack has 23 tackles through two games, tied for the best two-game total of his seven-year career.

Gunner Olzsewski basically has one job: to catch the football when it's kicked his way. He failed to do it during a critical moment on Sunday as a punt smacked off his facemask and into the arms of New England's Brenden Schooler to set up a short touchdown drive that gave the Patriots an 11-point lead late in the third quarter.

Bush is dealing with a foot injury, though Tomlin expects him to practice this week.

16-6-1 — Pittsburgh's record in Cleveland since the Browns rejoined the league in 1999. Cleveland has had the upper hand of late, going 2-1-1 against the Steelers at FirstEnergy Stadium since the 2018 season opener.

Try to get the downfield passing game going Thursday against a Cleveland secondary that gave up 307 yards and four touchdown passes to Joe Flacco — yes, 37-year-old Joe Flacco — in a stunning 31-30 comeback victory by the New York Jets on Sunday.