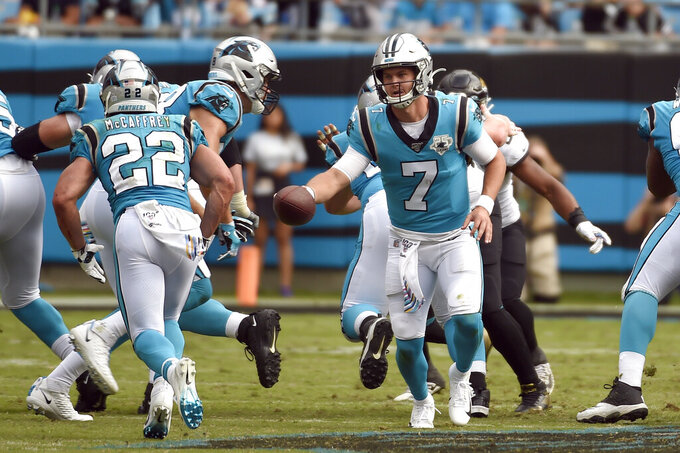 Carolina Panthers quarterback Kyle Allen (7) hands off to running back Christian McCaffrey (22) during the second half of an NFL football game in Charlotte, N.C., Sunday, Oct. 6, 2019. (AP Photo/Mike McCarn)

CHARLOTTE, N.C. (AP) — Christian McCaffrey has been an iron man for the Panthers in playing nearly all of the team's offensive snaps — and with good reason.

He's simply been too valuable to take off the field.

The third-year running back is putting up MVP-type numbers, amassing more than 175 yards from scrimmage in four of Carolina's first five games while racking up seven touchdowns.

Panthers tight end Greg Olsen called McCaffrey a unique guy because he can do so many things at running back, including break long runs, carry the ball in short-yard situations and catch the ball out of the backfield, out wide or in the slot.

"There are maybe some other guys who can do what he does in the passing game, but they aren't getting 25 carries also," Olsen said. "So that is kind of the difference with him and the other really good running backs — just the volume that he handles in both phases of the offense."

The only concern, perhaps, has been McCaffrey getting too much work and getting worn down as the season progresses.

But the good news is the Panthers might have found a player who can help spell McCaffrey so he doesn't need to be on the field for almost every play.

When McCaffrey cramped up with five minutes remaining in Sunday's game, the Panthers turned to little-known backup Reggie Bonnafon, who raced through a hole and went 59 yards for the deciding touchdown. Bonnafon finished the game for the Panthers, gaining 80 yards on five carries.

Nobody was happier than McCaffrey, who joked that he sometimes feels like he "hogs" the touches.

Don't be mistaken, McCaffrey should still see action on more than 90 percent of the team's plays. But Bonnafon could help spell McCaffrey early in the game, allowing him to be fresher in the fourth quarter — as well as later in the season.

"We got a good young stable of backs, led by Christian McCaffrey and Reggie and Jordan (Scarlett) and Elijah (Holyfield)," coach Ron Rivera said.

The running game. With rookie Dennis Daley making his first career start at left tackle and Daryl Williams filling in for four-time Pro Bowl right guard Trai Turner, the Panthers still managed to pound the Jaguars for 285 yards and three touchdowns on the ground, averaging 10.6 yards per carry. That included TD runs of 84 and 59 yards. Credit the offensive line staff with doing a tremendous job of getting this makeshift line ready to play Sunday.

The Panthers came in with one of the top pass defenses in the league but allowed rookie QB Gardner Minshew to throw for 374 yards and two touchdowns. It's probably just a blip on the radar, but you can bet other teams will study what the Jaguars were able to do against Carolina's secondary.

Brian Burns. Carolina's first-round draft pick has been nothing short of spectacular this season and could wind up being the best defensive player in the 2019 draft. After being selected as the NFC defensive rookie of the month for September, the hybrid defensive end/outside linebacker had another huge game Sunday, returning a fumble 56 yards for a touchdown along with a key strip-sack on Minshew late in the fourth quarter resulting in a takeaway — despite playing with a heavily taped wrist.

Joey Slye. The Panthers kicker was 10 of 11 on field-goal attempts, including four made kicks from beyond 50 yards earning him NFC special teams player of the month. But Sunday was a disaster. The Jaguars put pressure on field-goal attempts and Rivera suggested it might have affected Slye's timing as the undrafted rookie missed two field goals and an extra point.

0 — Number of turnovers for Panthers quarterback Kyle Allen after turning it over four times on fumbles the previous two weeks. However, this comes with an asterisk. Allen had an interception and a fumble nullified by penalties, and one other sack-fumble that was recovered by teammate Curtis Samuel.

Allen is 3-0 as Carolina's starter this season and can help the Panthers gain a measure of revenge Sunday in London against the Buccaneers, a team that handed Newton and the Panthers a 20-14 loss in Week 2. This will mark the first time the Panthers have played outside the United States in 25 seasons.