Bradley intent on taking Colts' defense to top of league 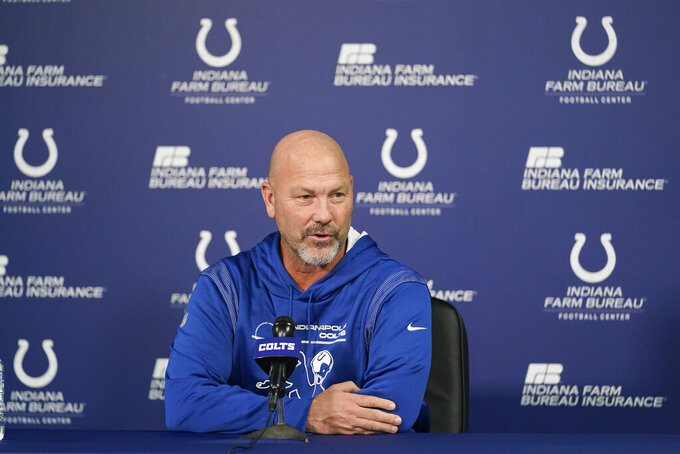 Play fast, force turnovers and make opposing quarterbacks uncomfortable. Those were the principles he used to guide a Super Bowl-winning defense in Seattle, and he believes they can produce the same result in Indianapolis.

“We want an effort-based defense,” Bradley said. “We want great enthusiasm, which I think is important on the field. Great energy, great toughness — mentally and physically tough — and the final thing is a defense that plays smart, makes good decisions. It’s play fast and ball out. It’s not complicated.”

The 55-year-old Bradley arrives with a reputation for turning poor defenses into strong units.

He did it again last year — his only season with Las Vegas. Bradley inherited a defense that finished among the bottom fourth of the NFL in 2020 and led it to a No. 14 ranking as the Raiders overcame the midseason loss of coach Jon Gruden and reached the playoffs. Gruden resigned after his past offensive emails were made public, but Bradley appreciated the time he spent with the veteran coach.

“It was great for me to be with Jon Gruden because here’s an offensive mindset trying to attack you every day in practice,” Bradley said. “That was a good experience for our system.”

Now the man best known for coaching Seattle's famed “Legion of Boom” secondary won't be embarking on another reclamation project. He's taking over a defense that finished second in takeaways (33), ninth in scoring (21.5 points allowed per game) and 10th against the run (109.1 yards).

The task: Take a unit that has been hovering near the top 10 and create a Super Bowl-contending defense.

“There’s a Pro Bowl player at every level here and it takes hard work and a certain mentality to reach that level,” Bradley said. “It’s unique to walk into a situation like that. Matt and I have had a relationship for many years. We’ve met together, talked together and I know what he’s instilled in this defense so our hope is to add and build on that.”

While some solutions may already be on the roster — the Colts used their top two draft picks last spring on pass-rushing defensive linemen — Bradley knows pressuring quarterbacks may require more than personnel moves.

He's willing to do whatever it takes.

“I’m not opposed to blitzing,” Bradley said. “There were some games where we blitzed 20, 25 times in a game last year and that’s because we needed to. Really you’re defined as a defense by your ability to get the ball and score.”

After spending 32 seasons on the coaching circuit, including four as Jacksonville's head coach, Bradley didn't need much time to contemplate his next move. Former Colts quarterback Philip Rivers gave Bradley a multitude of reasons why Indianapolis was a good fit.

“It was a long talk about Frank and (general manager) Chris Ballard, the Irsays and the ownership here and the community, the equipment room, the locker room, the people and the people,” Bradley said. “He just kept going on and on about it and all that was during COVID, not even like when everyone was together. So you felt like it was a pretty special place.”