Brady, Buccaneers back on practice field, preparing to win 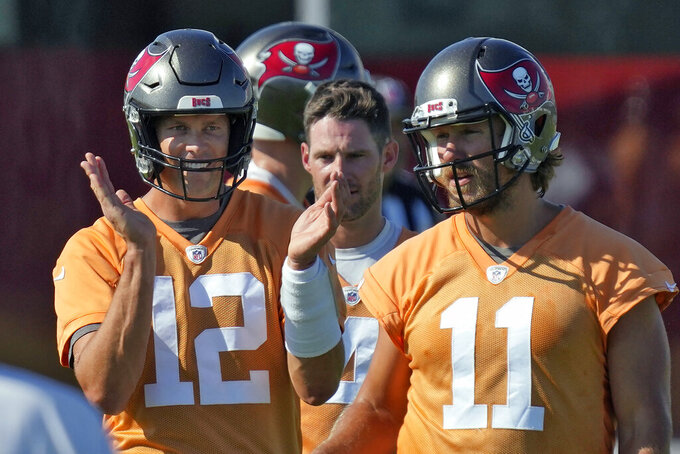 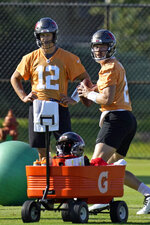 TAMPA, Fla. (AP) — Tom Brady concedes a lot has happened in the four months that have passed since he announced through social media that he was walking away from the NFL after 22 seasons and seven Super Bowl championships.

For starters, the 44-year-old quarterback did an about-face and unretired six weeks later, citing “unfinished business” as one of the reasons for changing his mind and returning to the Tampa Bay Buccaneers.

Brady subsequently also accepted a lucrative offer in broadcasting to join Fox as a football analyst after his playing career ends.

For now, though, he says he's just focused on helping the Bucs win another championship.

“It feels like a long time ago. A lot has happened between now and then,” Brady said Thursday, shrugging off a question about why he hung up his cleats in early February only to reverse the decision in mid-March.

“I feel like I’ve kind of moved past that point to be honest. But I’m happy I’m back with my teammates. It’s going to be a great year,” he added at the conclusion of the team’s three-day mandatory minicamp. “We have high expectations for what we’re trying to accomplish.”

Brady also talked about his relationship with former coach Bruce Arians, who retired a little more than two weeks after the NFL’s career passing leader announced his return, and the future of long-time teammate Rob Gronkowski.

He spoke less candidly about whether he had discussions with the Miami Dolphins this spring about the prospect of moving to South Florida in some capacity — possibly as a part owner, player or even both.

“Again, I had a lot of conversations with a lot of people, as I have for the last three or four years in my career, about different opportunities when I’m done playing football. I kind of made a decision about what I wanted to do, and I’ll get to be in the game of football," Brady said.

“I think for me, the most important thing is where I’m at now and what I hope to do for this team,” the quarterback added. ”That’s been my commitment to this team and this organization. It's been so much fun for me to come here two years ago. It’s been about 2½ now, and it’s been an incredible part of my football journey. And it’s not over.”

Brady, meanwhile, insisted he has a good relationship with Arians and did not play a role in the 69-year-old coach’s decision to step down. Former New York Jets coach and Bucs defensive coordinator Todd Bowles was promoted as Arians’ successor.

“Zero whatsoever,” Brady said when asked if a rift had developed between him and Arians, who remains with the team as a senior football consultant.

“He and I have a great relationship. Part of why I chose here was because of Bruce. ... I have great respect for him,” Brady added. “He knows how I feel about him. That’s the most important thing. And, I know how he feels about me.”

The quarterback would not speculate on whether Gronkowski, who’s a free agent after spending the past two seasons with the Bucs, will re-sign with Tampa Bay before the team reconvenes for the start of training camp next month.

“We’d all love to play with him, but he’s got to make that decision for himself, and he knows that,” Brady said.