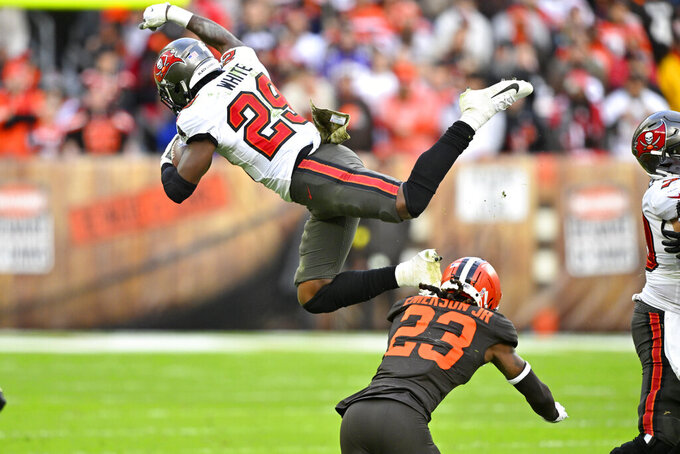 Tom Brady didn't bail them out this time.

The Bucs gave up a 12-yard touchdown pass with 32 seconds left in regulation, struggled offensively in OT and lost 23-17 when Cleveland's Nick Chubb scored on a 3-yard run with 19 seconds remaining.

The Bucs (5-6) were well-rested coming off their bye week, but breakdowns in all three phases ended their modest two-game winning streak and prevented them from moving back over .500 after stumbling through their first 10 games.

Still, they have a half-game division lead over Atlanta.

Brady threw touchdown passes to Chris Godwin and rookie Ko Kieft, but the Bucs bogged down on other potential scoring drives and have only eclipsed 22 points once all season.

“Seventeen points is not going to do it, and that is basically what we have been doing all year,” said Brady, who finished 29 of 43 for 246 yards and was sacked three times. "It's been the same thing all year.

"We’re not scoring enough points. Every play is an individual win or loss, and we’re losing too many.”

Tampa Bay had the ball twice in overtime, but had its first series sabotaged by a hands-to-the-face penalty called against left tackle Donovan Smith and punted. When the Bucs got it back, All-Pro right tackle Tristan Wirfs suffered a leg injury and Browns star end Myles Garrett sacked Brady.

Cleveland took over with 2:45 left and converted on a third-and-3 when receiver Amari Cooper got behind cornerback Carlton Davis III, who lost his balance and fell on the slick playing surface, and hauled in a 45-yard pass from Jacoby Brissett.

Two plays later, Chubb punched it in to knock out the Bucs.

Brady struggled to find any positives from a loss that felt like others this season.

“There were too many plays that we were not on the same page and we all were not seeing it the same way,” said the seven-time Super Bowl winner. "We just have to work on it, talk through it and see if we can improve it.”

The 6-foot-5, 320-pounder laid face down for several moments before being treated by medical staff while several of his teammates dropped to a knee. He was eventually helped up and carted off.

“It hurt a lot,” guard Nick Leverett said of seeing Wirfs go down. "When you see any of your teammates go down it hurts, but Tristan is like my brother. We line up next to each other, we bond a lot, we are in the same meeting room and the same position group.

"I hope it's not serious and a speedy recovery.”

Wirfs was walking, albeit gingerly in the locker room following the game.

“You hope it’s not as bad as it looks,” said coach Todd Bowles. "These guys are very close, so it’s tough. It’s a tragedy when you lose somebody like that.”

Injuries have been an issue for the Bucs, who were without leading rusher Leonard Fournette because of a hip injury. White made his second straight start and finished with 64 yards rushing and added 45 receiving on nine catches.

Godwin had 12 receptions for 110 yards, but Mike Evans was held to two grabs on nine targets.

Evans is troubled by Tampa Bay's inability to score despite a plethora of offensive playmakers.

“It's super frustrating.” he said. "Early on, it felt like we could do whatever we wanted between the run, play-action pass and the pass. It's just football. Guys were wide open and passes got tipped at the line. Just the little things like that. It's tough.”