Brady, Bucs searching for answers after loss at Pittsburgh 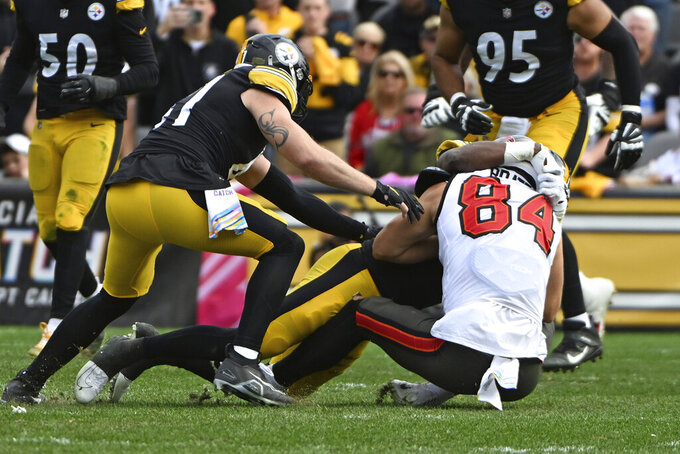 Tampa Bay Buccaneers tight end Cameron Brate (84) is tackled by Pittsburgh Steelers linebacker Myles Jack (51) during the second half of an NFL football game in Pittsburgh, Sunday, Oct. 16, 2022. Brate was injured on the play and taken off the field on a cart. (AP Photo/Barry Reeger)

PITTSBURGH (AP) — Everything was a challenge for Tom Brady and the Tampa Bay Buccaneers on Sunday against the Pittsburgh Steelers.

Brady entered with a highly-successful track record against a Steelers’ team that was mired in a four-game losing streak, coming off a 35-point loss at Buffalo a week earlier and playing without almost its entire starting secondary.

But Brady and the Buccaneers struggled against the much-maligned Steelers, as Tampa Bay reached the red zone three times, but settled for field goals. And when the Buccaneers found the end zone late in the fourth quarter, Brady’s two-point try came up short, as Pittsburgh ultimately prevailed with a 20-18 victory.

“There was nothing that was not challenging to our offense,” Brady said. “We have to do a lot better job than we did today.”

Brady struggled to take advantage behind an offensive line that had issues protecting him. The 45-year-old completed 25 of 40 passes for 243 yards and an 11-yard touchdown to Leonard Fournette with 4:38 to play. But, at one point, Brady berated his offensive line for underperforming against a Steelers defense that had just three sacks in the previous four games.

“It’s our whole offense,” Brady said. “We have to do a better job in the run game, in the pass game … everyone has to do a better job. Obviously, there’s no position that’s performing at an elite level right now.”

Pittsburgh beat Brady for just the fourth time in 16 tries, including the playoffs. The seven-time Super Bowl champion threw for 35 touchdowns and averaged close to 300 yards passing in the previous 15 games against Pittsburgh. Many of those were high-stakes showdowns for AFC supremacy while Brady was in New England.

Now, Brady and the Buccaneers are searching for an offensive identity after slipping to .500 following Sunday’s loss.

“We have to play a lot better,” Brady said. “It’s an execution game. You either make the play or you don’t. There’s too many plays that we’re not making.”

Star receivers Chris Godwin and Mike Evans combined for 10 catches against a Steelers secondary playing without four of its top regulars, including All-Pro Minkah Fitzpatrick.

Also, reliable tight end Cameron Brate left on a stretcher late in the third quarter after he was tackled by Pittsburgh linebacker Myles Jack following a 6-yard catch. Buccaneers coach Todd Bowles called it a neck injury and said Brate was being evaluated at the hospital. Brate was able to move all of his extremities and gave a thumbs up to his teammates as he was carted to the locker room.

Ryan Succop kicked a pair of field goals, from 30 and 27 yards, to make it a 7-6 game early in the second quarter.

On the first field goal drive, Brady moved the Buccaneers to the 17-yard line, but three consecutive incomplete passes led to Succop’s kick. On the second, the Buccaneers had second-and-goal from the 3, but a loss on second down and a sack brought out Succop for another short field goal.

Succop made it a one-point game in the third quarter, 13-12, with his fourth field goal. Tampa Bay had first-and-goal from the 4-yard line, but the Buccaneers were forced to settle for Succop’s 24-yard field goal after an ineligible man downfield penalty, a loss and a pair of incomplete passes stalled the drive.

The Buccaneers reached the end zone late in the fourth quarter, thanks to a 14-play, 73-yard drive, but came up just short on the 2-point try. Tampa Bay converted a third down and a pair of fourth-and-1 tries before Brady connected with Fournette for an 11-yard score to make it a two-point game.

But Steelers linebacker Devin Bush broke up the 2-point conversion and Pittsburgh was able to run out the clock.

“We didn’t earn the win,” Brady said. “It’s a game of performing well and we’re just not doing a good job of that. I don’t think we’ve done that for six weeks. I think we’re all playing less than what we’re capable of. We all have to look ourselves in the mirror and figure out why.”