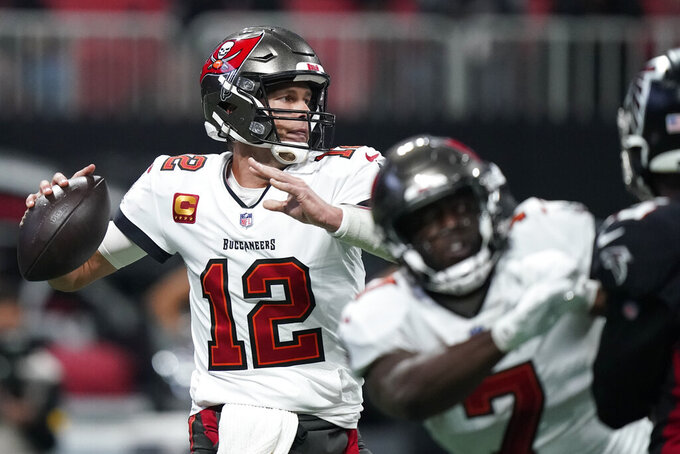 Tampa Bay Buccaneers quarterback Tom Brady (12) works in the pocket against the Atlanta Falcons during the first half of an NFL football game, Sunday, Dec. 5, 2021, in Atlanta. (AP Photo/Brynn Anderson)

BETTING LINE: Buccaneers by 3, according to FanDuel SportsBook.

TURNOVER DIFFERENTIAL: Bills plus-9; Buccaneers plus-8

BILLS PLAYER TO WATCH: CB Dane Jackson. The second-year player’s coverage skills weren’t tested by the Patriots on Monday, when Jackson took over for Tre’Davious White, who will miss the remainder of the season with a torn left knee ligament. That won’t be the case for Jackson on Sunday in facing the NFL’s top passing attack.

BUCCANEERS PLAYER TO WATCH: QB Tom Brady has had his way against the Bills, 32-3 in 35 career meetings and winning 17 AFC East titles in 20 seasons with the New England Patriots. The seven-time Super Bowl champion leads the NFL with 3,771 yards passing and 34 touchdowns. He’s thrown for 70 TDs and run for two more against Buffalo.

KEY MATCHUP: Josh Allen and Buffalo’s struggling offense against a Tampa Bay defense that hasn’t been nearly as consistent as the Bucs feel they need to be to make another deep postseason run. The Bills’ struggles generally revolve around the team being overly dependent on its quarterback. Buffalo doesn’t have a rushing TD in the past three games. Meanwhile, Allen has thrown nine TD passes while also turning over the ball nine times (seven interceptions, two lost fumbles) in his last five games.

KEY INJURIES: Bills top run-stuffing DT Star Lotulelei has been ruled out with a toe injury. Starting OL Jon Feliciano resumed practicing last week and has been designated to return off injured reserve after missing five games with a calf injury. Backup LB A.J. Klein, who fills a run-stopping role, is unlikely to play after being placed on the Reserve/COVID-19 list Monday. ... CB Jamel Dean began the week in the concussion protocol and DL Will Gholston suffered a knee injury during last Sunday’s win at Atlanta; the Bucs are hopeful they’ll be able to play against the Bills. ... CB Richard Sherman, who’s missed the past six games with a hamstring issue that landed him on injured reserve, has resumed practicing and could be activated as soon as this week.

SERIES NOTES: Tampa Bay leads the all-time series 7-4, however, the Bills have won two of the past three meetings. ... It’s Buffalo’s first visit to Raymond James Stadium since a 27-6 loss in 2013. ... Bills coach Sean McDermott is 1-0 vs. the Bucs. Tampa Bay’s Bruce Arians is 0-1 against Buffalo.

STATS AND STUFF: The Bills are in a midseason holding pattern, having gone 3-4 in their past seven games, and facing the possibility of losing two straight for the first time this season. ... Since the start of the 2019 season, they’ve only lost two in a row twice: at Tennessee and vs. Kansas City in October 2020, and the final two games of the 2019 season, including a 13-6 loss to the Jets in which Buffalo rested most of its starters because its playoff seed was already set. ... In last Monday night’s 14-10 home loss to New England, the Patriots ran 46 times and only attempted three passes. ... Red-zone offense has become an issue after Buffalo had a TD, FG, missed field goal and turned over the ball on downs in four trips inside New England’s 20 on Monday night. ... Buffalo is 0-4 when it doesn’t rush for at least 100 yards after going 5-3 last season. Conversely, the Bills are 1-3 when allowing an opponent to run for 100-plus yards. They’ve yielded 200-plus yards in two of the past three games. ... The Bucs can clinch the NFC South title and a playoff berth with a win Sunday, plus a New Orleans loss or tie and a Carolina loss or tie. They haven’t won a division title since 2007. ... In addition to leading the NFL in passing offense, the Bucs are the top scoring team in the league at 31.4 points per game. Including postseason, they are 19-0 when scoring 30-plus since Brady’s arrival from New England in 2020. ... TE Rob Gronkowski has 69 receptions and 12 TD catches in 15 career games against the Bills. ... Brady needs 18 completions to move ahead of Drew Brees (7,142) for the most completions in league history. He’s two TD passes shy of becoming the first player with 700 TDs passing, including playoffs.

FANTASY TIPS: Bucs WR Chris Godwin is coming off a 15-catch, 143-yard performance against the Falcons. He has 48 receptions for 540 yards and three TDs, along with a trio of 100-yard performances, in the past six games. ... Bills WR Stefon Diggs had eight catches for 173 yards and two TDs for Minnesota (2017) the only other time he’s faced Tampa Bay.