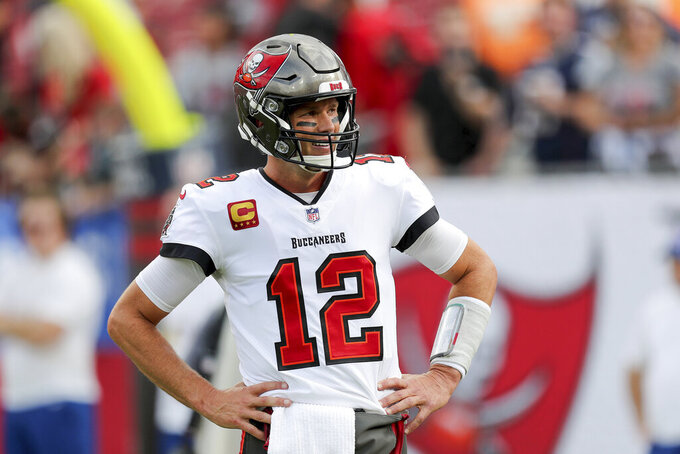 Tampa Bay Buccaneers quarterback Tom Brady (12) looks at the sideline for instructions during a NFL football game against the Carolina Panthers, Sunday, Jan. 9, 2022, in Tampa, Fla. The Buccaneers play the Philadelphia Eagles in an NFC wild-card game on Sunday. (AP Photo/Alex Menendez)

TAMPA, Fla. (AP) — Tom Brady’s looking ahead, though not beyond this weekend.

No one’s had more success in the NFL playoffs than the seven-time Super Bowl champion, who says his focus is on trying to help the Tampa Bay Buccaneers beat the Philadelphia Eagles and not a dazzling postseason resume or how well he’s played at age 44.

The Bucs (13-4) set a franchise record for wins during the regular season, with Brady joining Drew Brees and Peyton Manning as the only quarterbacks in the past 30 years to lead the league in passing yards, touchdowns, attempts and completions.

With a career-best 5,136 yards — the third-highest single-season total in NFL history — and 43 TDs, the argument can be made that this has been his finest season.

If Brady agrees, he’s not saying.

“I feel like it’s, for me, always about the team’s success so it’s hard to compare one year to another. I feel like I want to play as a championship-level player. That’s what I’ve said for a long time,” the Bucs star said.

“I said a long time ago when I suck I’ll retire. But what I really meant was when I’m not capable of leading the team to victory, then someone else has to do the job. I feel like I can do that,” Brady added. “Obviously, we’ve put ourselves in a decent position. Now we’re in the postseason, and we’ve got to take care of a very tough opponent.”

Eagles quarterback Jalen Hurts was 3 years old when Brady made his first postseason start in 2001.

Brady enters Sunday’s NFC wild-card round matchup at Raymond James Stadium with a sparkling 34-11 playoff record. He’s thrown for 12,449 yards and 83 touchdowns — both all-time league bests — in those 45 games.

Hurts, 23, is in his first year as Philadelphia’s full-time starter. The Eagles have won seven of 11 games since losing to Tampa Bay 28-22 at home on Oct. 14, including four of the past five to earn the No. 7 seed in the NFC.

One of the keys to the surge has been the NFL’s top rushing attack.

Hurts is one of eight quarterbacks in league history to throw for more than 3,000 yards and run for more than 750 in the same season. He led the Eagles with 784 yards rushing and 10 TDs on the ground, with most of that production coming since facing the defending Super Bowl champs.

“He has definitely gotten better throughout that time, which doesn’t surprise me at all because Jalen is a student of the game. Jalen wants to get better and craves to get better. ... I think you’re just seeing him grow closer and closer to his ceiling,” first-year Eagles coach Nick Sirianni said.

But it’s not as if Hurts has never performed on a big stage, having done so in college with Alabama and Oklahoma.

“Any experience that I’ve had prior to coming to the NFL, all of those help me,” Hurts said. “Regardless of the stage or the name of the game, it’s about the Philadelphia Eagles executing to the best of their abilities and having the right type of focus and preparation.”

Brady was asked where his glittering playoff record ranks among his many accomplishments, including being the NFL’s career passing leader.

“That’s a good question. If you had asked me what my record was, I would have said: ‘I don’t know.’ It’s just the reality of doing this and staying focused on what’s ahead and not looking back,” Brady said. “I’d love to get to 35-11 — that would be my answer. Got to go win a very tough game against a great opponent.”

TURNING TO THE RUN

The turning point in Philadelphia’s season came when running the ball became the focal point of the offense. A glimpse of that success occurred in the six-point loss to the Bucs in October. The Eagles only handed the ball to a running back once in the first half of that game and trailed 21-7. But Miles Sanders ran seven times for 55 yards in the second half as Philadelphia made it a one-score game.

The Eagles ran for at least 130 yards in the next nine games, including seven in a row with more than 175 yards.

Tampa Bay’s high-scoring offense hasn’t shown any signs of slowing down, even after losing WR Chris Godwin (98 receptions, 1,103 yards, five TDs) to a season-ending knee injury and the dismissal of WR Antonio Brown. WR Mike Evans (74 catches, 1,035 yards, 14 TDs) and Rob Gronkowski (55 receptions, 802 yards, six TDs) have had big seasons, and lesser-known receivers Breshad Perriman, Cyril Grayson and Scotty Miller are making the most of the opportunities they’ve been given to contribute. The Bucs are averaging 405.9 yards and 30.1 points per game.

Bucs offensive coordinator Byron Leftwich stops short of declaring that Brady has had the best season of a 22-year career that began with a two-decade stint with the New England Patriots.