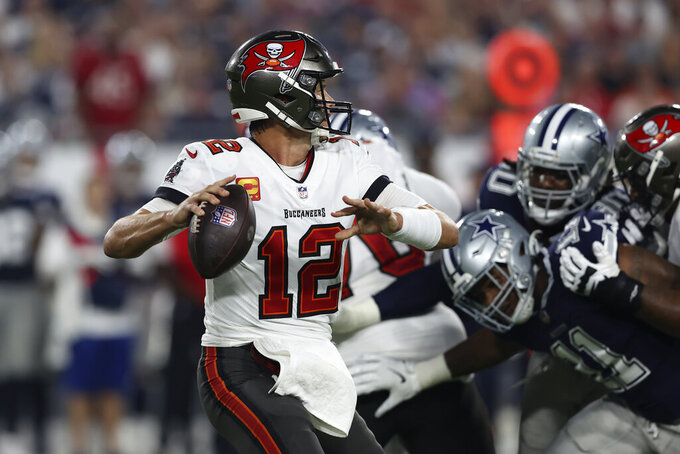 TAMPA, Fla. (AP) — Tom Brady and the Tampa Bay Buccaneers weren’t at their best in a season-opening victory. The defending Super Bowl champions will never apologize for winning.

Four turnovers, 11 penalties for 106 yards, and the fact they needed a field goal in the closing seconds to beat the Dallas Cowboys 31-29 showed the Bucs have a lot of work to do to revert to championship form.

“I think in tight ball games we have a ton of confidence. For me, just don’t put ourselves in that situation,” Arians added. “Let’s play better and have that 14-point lead we should have had instead. ... But the confidence is real. It’s earned.”

The 68-year-old Arians likes to say he learned a long time ago that “you don’t learn anything more from losing than you do from almost losing,” so he’s certainly not going to complain about being 1-0.

Neither is Brady, who led a game-winning drive in the fourth quarter or overtime of a regular-season game for the 49th time. Ryan Succop finished it with a 36-yard field goal with two seconds remaining.

“Fortunately, we found a way to win. ... But as a team, we all know we have to get back to work and try to improve,” Brady said.

The passing game took up where it left off in the Super Bowl, with Brady throwing for 379 yards and four touchdowns — two of them to Rob Gronkowski, who has 86 career TD receptions from the 44-year-old quarterback. Peyton Manning and Marvin Harrison (112), and Philip Rivers and Antonio Gates (89) are the only tandems with more regular-season TD connections.

The running game produced just 52 yards, although that partly was due to Dallas controlling the ball for long stretches of the game. Leonard Fournette (nine attempts, 32 yards) and Ronald Jones (four attempts, 14 yards) combined for 13 carries. The Cowboys ran 77 offensive plays to Tampa Bay’s 64 and held a 34:27 to 25:33 edge in time of possession.

Antonio Brown, who joined the Bucs at midseason a year ago after serving an eight-game suspension for violating the NFL’s personal conduct policy, had a 47-yard TD reception and finished with five catches for a team-high 121 yards.

Although Arians insists he hasn’t lost confidence in Jones, the running back didn’t touch the ball after losing a second-quarter fumble that led to a Cowboys touchdown.

“Ro was running really, really well until the fumble, and then he struggled mentally to get over it,” Arians said. “That was too big of a game to go out there and not be focused, so ‘Lenny’ got the rest of the way.”

Cornerback Sean Murphy-Bunting left the opener with a dislocated elbow. X-rays taken at the stadium came back negative, however, Arians was awaiting an update later Friday. “Really have nothing to report timewise yet, but we’ve got our fingers crossed,” Arians said. ... Safety Jordan Whitehead (hamstring) sat out Thursday night, but there’s a chance he might return next week.

Dating to a bye week last December, the Bucs have won nine straight games. They’ve scored 30-plus points the past eight.

After NFC South rival Atlanta visits Raymond James Stadium on Sept. 19, the schedule gets tougher with consecutive road dates against the Los Angeles Rams and New England, where Brady will face his former team and coach Bill Belichick for the first time.