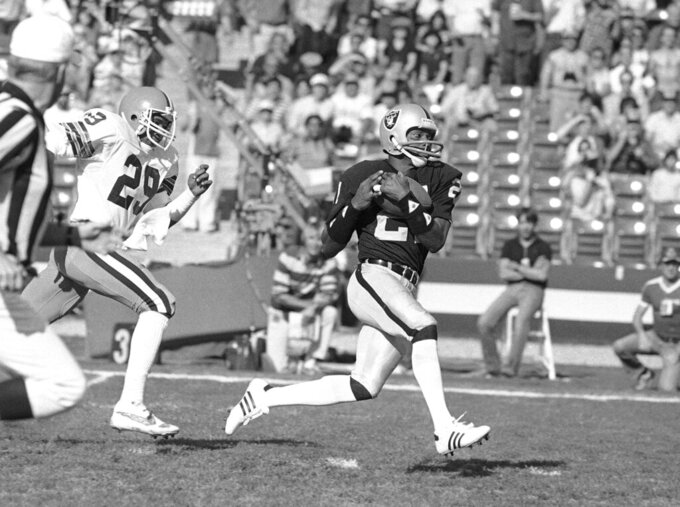 Branch is the senior candidate and Vermeil is the nominee in the coaches category picked Tuesday by a five-person committee of Hall of Fame voters. To be elected to the Hall of Fame, Branch and Vermeil must receive 80% of the vote from the entire 49-member selection committee when it meets early next year.

Branch was one of the most dynamic receivers of his era as the speedy deep threat for the Raiders that stretched opposing defenses.

He also played a key role on three Super Bowl champions with 73 catches for 1,289 yards and five TDs in 22 playoff games. Only Jerry Rice, Julian Edelman and Michael Irvin have more yards receiving in the postseason than Branch.

“He dreamed of this. He wanted this so bad, he could taste it,” Cliff’s sister, Elaine Anderson, said in a call with Hall of Fame President David Baker on Tuesday. “It was all he talked about — when he would go to the Hall of Fame.”

Vermeil came to the Eagles from UCLA in 1976 and got long-struggling Philadelphia into the playoffs in his third season and Super Bowl two years after that where he lost to Branch and the Raiders 27-10.

He stepped away from coaching following the 1982 season and became a broadcaster before returning to the sideline in 1997 in St. Louis.

He once again quickly revived a downtrodden franchise and delivered the Rams their first Super Bowl title in his third season with one of the most prolific offenses led by Hall of Famers Kurt Warner, Marshall Faulk and Isaac Bruce.

He left the Rams after that Super Bowl and finished his coaching career with a five-year stint in Kansas City starting in 2001.

He posted double-digit wins in six of 15 seasons and had a .524 career winning percentage.

“I am overwhelmed. I’m not sure I belong there,” Vermeil said of the Hall of Fame upon hearing the news of his finalist status from Baker. He said the coach committee had his “deepest appreciation and gratitude.”

The selection committee will also consider 15 modern era finalists and one contributor, who will be named on Aug. 31.

The preliminary list of modern era candidates will be picked in September, then trimmed to 25 semifinalists in November and the 15 finalists in January.

The Class of 2022 will be formally enshrined next summer in Canton, Ohio.