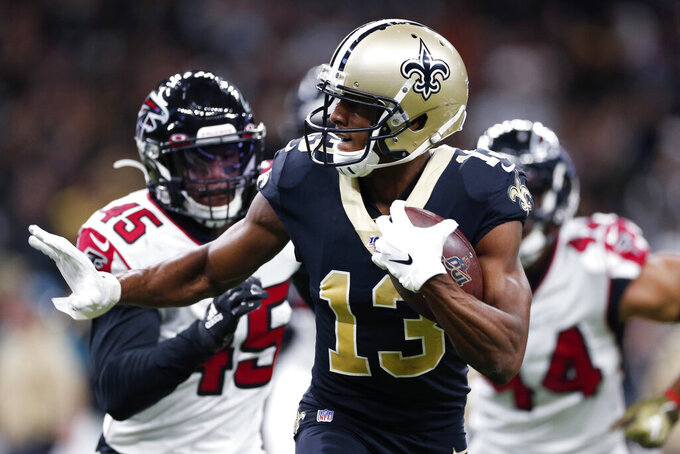 TAMPA, Fla. (AP) — Drew Brees looks at Tampa Bay and sees an opportunity for the New Orleans Saints to reassert themselves, though not necessarily because the Buccaneers have a young, inexperienced secondary.

The Bucs may rank last in the NFL in pass defense, but the veteran quarterback of the NFC South leaders — coming off a lopsided loss to the Atlanta Falcons — says he pays a lot more attention to game film than numbers while preparing for an opponent.

“I’m saying just in general, I don't look at statistics and then judge a defense or anyone based just on the statistics,” Brees said. “I'm going to turn on the tape, I'm going to trust what I see, and then I'm going to go out to execute according to that.”

The Bucs (3-6) lead the NFL in run defense, yielding just 77.8 yards per game on the ground. Conversely, they’re allowing an average of 299 through the air while giving up a league-high 31 points per game.

And that’s before coach Bruce Arians and general manager Jason Licht decided to part ways with cornerback Vernon Hargreaves III, who was waived this week after being benched for a portion of last Sunday’s 30-27 win over the Arizona Cardinals.

With a couple of other young, inexperienced players dealing with injuries, Tampa Bay probably will be forced to start three rookies (safety Mike Edwards, cornerbacks Sean Murphy-Bunting and Jamel Dean) and a second-year player (safety Jordan Whitehead) in the defensive backfield against the Saints on Sunday.

Brees isn’t assuming New Orleans (7-2) will have a clear-cut advantage.

“They're young, but they're talented,” the 40-year-old quarterback said. “Look at the investment that they've made in their secondary over the last three years with draft picks.”

Hargreaves was a first-round pick, No. 11 overall in 2016. In addition to selecting him, the Bucs used four second-round selections, two third-round picks and a pair of fourth-rounders on defensive backs over the past four years.

“Defensively, we’re still a work in progress. ... All those young kids in the secondary are getting better and better,” said Arians, whose team ended a four-game losing streak against Arizona.

Now, it’s the division-leading Saints looking to rebound after being held without a touchdown in last week’s 26-9 loss to last-place Atlanta.

New Orleans beat Tampa Bay 31-24 at home without an injured Brees (thumb) on Oct. 6. After facing the Bucs again, the Saints will complete a stretch of four consecutive games against NFC South foes by hosting Carolina and traveling to Atlanta.

“We were extremely disappointed in our performance (last week). I think we know we're a lot better than that and understand that, especially at this point in the season, this is a time when we really want to start separating ourselves from the pack,” he said.

While the Saints held Bucs receiver Mike Evans without a catch in their last meeting, the defender who primarily covered Evans might not be able to play on Sunday. Cornerback Marshon Lattimore left last weekend’s game with a pulled hamstring. The Saints moved P.J. Williams to cornerback and rookie C.J. Gardner Johnson into Williams’ usual nickel back slot. The results were encouraging. Although the Saints lost, the Falcons finished with fewer than 200 net yards passing. Still, Saints coach Sean Payton is weary of Jameis Winston’s ability to get the ball downfield to both Evans and Chris Godwin.

“Their passing numbers right now are outstanding when you look at (the Bucs’ success rate on) third down, at what they’re scoring,” Payton said. “So, changing up the looks, trying to affect him is important and then understanding, hey, how are the interceptions coming, how are the fumbles coming? All of those things you study.”

Hargreaves was due to earn $9 million next season, although it was guaranteed for injury only. While the impending salary was a factor in the decision to release the fourth-year pro, the move also reiterated one of Arians’ points of emphasis in his first season with the Bucs.

“You control your attitude and your effort,” the coach said. “You don’t control a lot of things, but you control those two — and they better be good.”

Starting left guard Andrus Peat, a 2018 Pro Bowl selection and 2015 first-round pick, broke his arm during New Orleans’ loss to Atlanta and had surgery this week. His recovery could keep him out until the final week of the regular season. Will Clapp, a second-year pro out of LSU, was first off the bench to replace Peat during the game. Clapp struggled, but so did much of the offensive line that day, when Brees was sacked six times. In addition to Clapp, the Saints have a couple of veterans who could sub in as needed: Nick Easton and Patrick Omameh. Easton was signed as a free agent when center Max Unger retired, but the Saints then acquired Texas A&M center Erik McCoy in the second round of last spring’s draft and he won the job. Easton has played in just three games this season and was a healthy scratch last weekend, but that could change.

“Every season, you’re going to have guys that go down for a period of time — you hope not too long, and you have to have guys step up and fill in,” Brees said. “I’m confident with the guys we have to do that.”