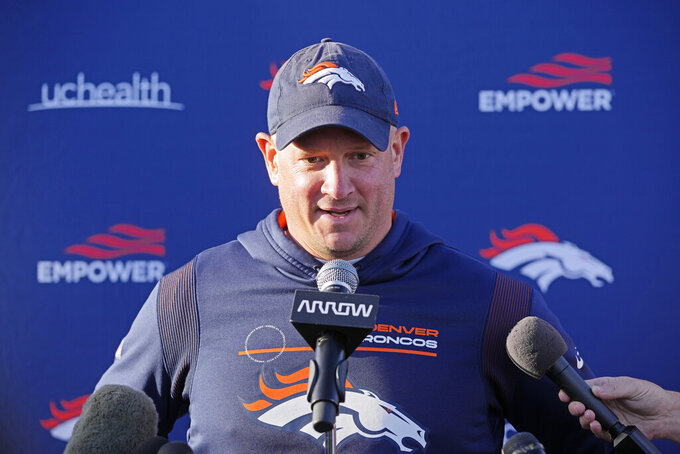 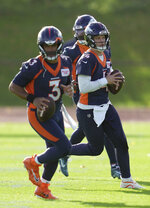 Paton defended Hackett, who's been hammered nationally over his persistent game management mistakes, and his $245 million quarterback who looks nothing so far like the nine-time Pro Bowler he was in Seattle.

“I believe in Nathaniel. I support Nathaniel 100%,” Paton said ahead of the Broncos' game Sunday against Jacksonville in London, where Wilson is expected to return from a strained hamstring that sidelined him last week.

“He’s been in this for seven games as a head coach. The scrutiny he’s faced is unprecedented. We’ve had four prime-time games, so he’s kind of had to learn in front of the entire world,” Paton said. "But I really like how he’s kept the team together.”

The Broncos (2-5) have lost four in a row despite a defense that's allowed just 16.4 points a game. Their offense is averaging 14.3 points, worse than at any time during their six-year playoff drought under 11 other QBs and three other head coaches.

Paton acknowledged the offense's struggles with Hackett calling plays and said overall the franchise needs to “learn how to win.”

As for Wilson, Paton insisted he doesn't see a diminished player in Wilson, who turns 34 next month. Wilson has just five touchdown passes and has been sacked 20 times. He's consistently missed open receivers either with his eyes or his passes and has been particularly ineffective out of the shotgun, where his footwork and mechanics aren't as crisp.

Paton acquired Wilson from the Seahawks for three players and five draft picks, including their first-rounder this year and next, and signed him to a $245 million extension before the season.

The Broncos' early season blunders have led not only to national scrutiny of Wilson and Hackett, but have led to fans streaming toward the exits early in close games.

Paton opened his remarks to reporters in Harrow, England, saying, “I think it’s a really good time to get out of town and come here and come together and I think that it’ll galvanize our football team.”

Even with his endorsements for his coach and quarterback, Paton made clear that the team must turn things around.

“Obviously, not good enough at 2-5. And we all need to get better and it starts with me,” he said. “But I do believe in this football team. I do believe in the people in the building, our coaching staff that we can turn it around. It’s only seven games. Obviously we’ve been in every game and that’s not what it’s all about. It’s about winning games and we need to learn how to win football games. We haven’t done that.”

Although insisting there are no excuses, Paton said the early season offensive hiccups aren't surprising given all the newness.

“It doesn't all come together” right away, Paton said. “And I knew it wasn't going to be a well-oiled machine. I thought it would take time. And obviously it has, but there's a lot we have to work on."

NOTES: Paton dismissed the notion that another loss Sunday would result in a fire sale of talent ahead of the NFL's Tuesday trade deadline: “Really, we’re just trying to win this game. It shouldn’t have any impact on what we’re trying to do."