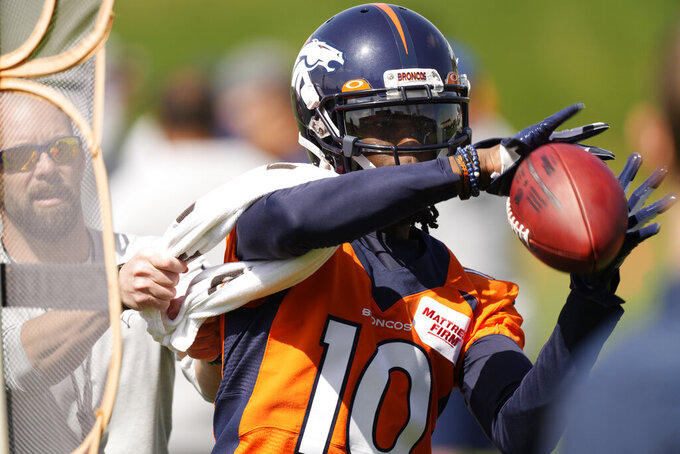 DENVER (AP) — Broncos wide receiver Jerry Jeudy was arrested Thursday on a misdemeanor charge after a dispute with his girlfriend at their suburban Denver home and he was being held at the Arapahoe County Jail, which is next to the team's training complex.

According to a police report submitted to the Arapahoe County court, Jeudy’s girlfriend, Antoinette Tharp, told a deputy that “things got crazy” with Jeudy on Wednesday night and he put her wallet and medical paperwork for their infant child in his car at their home so she could not get them.

She said she wanted to go back to Virginia but could not leave without those belongings, telling the deputy she did not want to get Jeudy in “trouble” but just wanted her things back.

According to the document, Jeudy admitted to locking some things in his car, including baby formula, because Tharp took one of his three cell phones and would not give it back.

Arapahoe County Sheriff Tyler Brown said at a news conference that Jeudy was cooperative during his arrest and that there was no physical violence involved in the incident. He said Jeudy would be held overnight and would appear before a judge Friday morning.

Jeudy, the Broncos’ first-round draft pick out of Alabama in 2020, was being held on suspicion of second-degree criminal tampering with a domestic-violence enhancer, a misdemeanor.

Brown, who called the charge a “very low-level misdemeanor,” said he called the news conference to clarify a couple of points, including that there was no physical violence involved.

“The second portion of this is a domestic violence enhancer and I know the word ‘violence’ connotates physical contact. I can tell you specifically that there was no physical contact between Mr. Jeudy and the female party in this investigation. It solely involved property,” Brown said.

“There was no damage to property,” the sheriff added. “All that happened is that there was an accusation that property was being withheld and deputies determined that there was enough probable cause to make an arrest."

Messages were left for Jeudy's representatives, and the team issued a statement saying it was “in the process of gathering more information.”

Jeudy, 23, was the 15th overall pick in the 2020 NFL draft but has largely been a disappointment in the pros.

He had a propensity for drops his rookie year when he caught 52 passes out of 113 targets for 856 yards and three touchdowns. He sustained a high ankle sprain in the 2021 opener and finished with just 38 catches for 467 yards and zero touchdowns last year.

“There are things you can control and things you can’t control. Those first two years are gone now, so I’m just focused on this year,” Jeudy said last week during a break in the Broncos' offseason training program.

Jeudy said he was aiming for a bounce-back season this year under new coach Nathaniel Hackett and newly acquired QB Russell Wilson.