Broncos' Joe Flacco shows he still has the arm strength 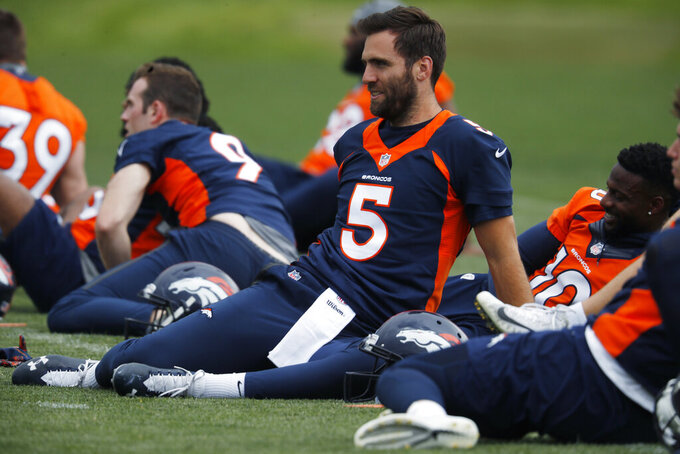 The 34-year-old quarterback showed off his strong right arm Tuesday as the Denver Broncos kicked off their three-day minicamp , throwing frozen ropes over the middle and deep passes down the sideline.

"He looks like a Super Bowl MVP to me," Von Miller said. "Today he had a play-action, rolled out to the right and threw the ball from the opposite 20 to the opposite 15. Now, I don't know how far that is."

Asked afterward how far he can still throw it, Flacco said, "I have no idea. I hope I don't have to throw the ball too, too far. You want to get the ball out and throw it in rhythm. So, hopefully, 50 yards downfield and you won't push it down much further than that.

"But I would think that the air up here, you actually can get a few more yards further. I mean, I have no idea how far I can throw a ball up here. I haven't really tried and I don't really plan on going out there and trying to do it."

Well, he did it once.

Back in the playoffs in 2012, he hit Jacoby Jones with a 70-yard touchdown throw in the final minute of regulation that sparked Baltimore's stunning double-overtime win over Peyton Manning and the Broncos.

"That gets pumped up," Flacco said. "If you go back and look at that throw, it was only like 50 yards. It could have been more. Jacoby didn't think the ball was coming to him. I was getting ready to wind up and fire it. Next thing you know I had to kind of take some off. I don't think I threw the ball that far there. But, whatever you want to say, it sounds good."

What the Broncos want to get out of their three-day minicamp that caps their offseason program is confidence that Flacco can hit his targets all over the field, short, medium and long.

The Broncos' hopes of ending a three-year playoff drought rest on Flacco being the steady veteran they thought he was when they traded for him this offseason and not having to rush rookie Drew Lock.

So far, coach Vic Fangio likes what he sees in Flacco.

"He still has a big arm, the ball still comes out of his hand with a lot of liveliness to it," Fangio said. "It's a very catchable ball. I think the guys like playing with him. I've been happy with Joe."

Of course, Flacco flashed Tuesday during 7-on-7 drills and without the likes of Joey Bosa or Chris Jones bearing down on him. But his passing prowess is a welcome change after the Broncos quartet of Trevor Siemian, Brock Osweiler, Paxton Lynch and Case Keenum over the last three seasons.

The key come September is keeping Flacco upright, and that's why the Broncos are excited about the changes they've made up front, drafting LG Dalton Risner, signing RT Ja'Wuan James and hiring O-line coach Mike Munchak, who will try to fix LT Garett Bolles.

When Manning visited the Broncos practice last week he mentioned how having Fangio as his defensive coordinator early in his career in Indianapolis made him a better quarterback because Fangio tried to win every practice.

"There's no doubt, you can see it, man," Flacco said, suggesting Fangio still has a bit of that defensive coordinator in him as he transitions into being a head coach for the first time.

"I think it's a good thing. It creates that competition every day in practice," Flacco said.

Flacco said he was a bit awed by Manning's visit.

"I don't really know Peyton that well. So, it's still cool for me," Flacco said. "He's still a guy that I grew up watching play. Now, I'm on the same football field as him. So, I really don't lose sight of that. Shoot, it's Peyton Manning, I'm still watching him do Nationwide commercials, just like (everyone else). So, anytime I get a chance to talk with him it's pretty neat."

Some of Flacco's teammates have said similar things about how they grew up watching him, especially members of his exceptionally young receiving corps.

Not that it makes Flacco feel old.

"I forget. I think I'm 23, too," Flacco said. "And it really does happen. I'll be sitting in there and we'll be shooting the breeze in the cafeteria or locker room or whatever and you really do forget, oh my God, these guys are 10 years younger than I am, at least some of them. It doesn't really dawn on me. I really don't see it that way. Everybody wants to talk about age. But in this sport it really doesn't matter that much. It's just about going out there and performing."