Broncos lack a first-round draft pick and they don't care 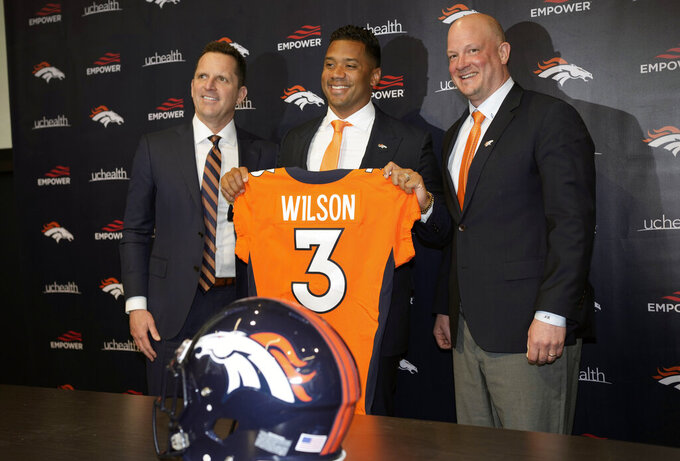 FILE - Denver Broncos new starting quarterback Russell Wilson, center, is flanked by coach Nathaniel Hackett, right, and general manager George Paton after a news conference March 16, 2022, in Englewood, Colo. Hackett said there's never “too high of a price on anybody that’s great" — especially when it comes to quarterbacks. Denver had been dealing with a revolving door of mediocrity at the most important position ever since Peyton Manning retired seven years ago but now has Wilson in place. (AP Photo/David Zalubowski, File)

ENGLEWOOD, Colo. (AP) — George Paton doesn't own a first-round pick in the upcoming NFL draft and he couldn't care less.

Paton traded his first- and second-round picks to Seattle as part of the blockbuster trade for Wilson last month.

Peering out his office window and watching Wilson throw darts to Jerry Jeudy and KJ Hamler sure keeps any tinges of regret at bay.

Asked Friday at his pre-draft news conference if he's feeling the painful part of the deal that also cost him his first- and second-round picks in 2023 along with three players, Paton dismissed any notion of a downside.

“It's a blessing,” he said. “I mean, we love having first-round picks. We love having the early second-(rounder). But we also love having a franchise quarterback that sets the tone every day in the building.”

That's something he's constantly reminded of when he arrives at work to resume grinding on the team's draft preparations.

“I come in here, he’s here working," Paton said. “There’s a reason he’s great. It’s because the work he puts into it. And all the players, everyone in the entire organization, are watching. And so there’s no pain in that.”

Paton still owns nine selections in this draft, including the final pick of Round 2, which he acquired from the Rams in the Von Miller trade last year.

He's not ruling out packaging some of them to add to the paucity of picks he has next year.

The Broncos are one of a record eight teams who don't have a first-round pick this year. That list includes the Super Bowl champion Rams, who haven't made a selection in Round 1 since taking Jared Goff in 2016 and don’t currently have another first-round pick until 2024,

“Unlike the Rams, we like picks a lot,” Paton cracked. “No, Les (Snead) is a good friend. But if that comes up — we don't want to force it — but we'd definitely like to add more picks next year.”

Paton said if the right players start dropping, he could see the Broncos moving up in the second round, but he could also envision moving back.

As he's mapping out his draft strategy, Paton has brought Wilson into the conversation.

“I've talked to Russ daily and kind of tell him maybe our plan and what we’re looking for and our needs,” Paton said. “And Russ, he's a football junkie, and he’ll want to know maybe what players were looking at and I’ll tell him. And he’ll watch them and give me his opinion. He's a great resource and you know it’s just good having him around.”

“We want a guy to be here long term and be the best player. So we’re not going to just take a player because he’s ready. We want a player who is going to be here for five years. And Russell will probably outlast them all.”

Despite not picking until the bottom of the second round, the Broncos own five of the top 116 selections, including two picks in both the third and fourth rounds.

That's the sweet spot of this year's draft, which is much deeper than last year's when the pandemic led to a shallower pool of prospects as dozens of players stayed in school after the NCAA offered them an extra year of eligibility because of COVID-19.

High on Paton's long wish list is edge rusher and not necessarily because Bradley Chubb is entering the final year of his contract.

“If we take a pass rusher, it has nothing to do with Bradley," Paton said. "We can't have enough. Randy Gregory, Malik Reed. Jonathan Cooper. That's how you win, when you get a wave of rushers and you have an offense that can score points and then you throw this pass rush at them.”

The Broncos really haven't had that type of luxury since Miller and Peyton Manning led the franchise to its third Super Bowl title in 2016.