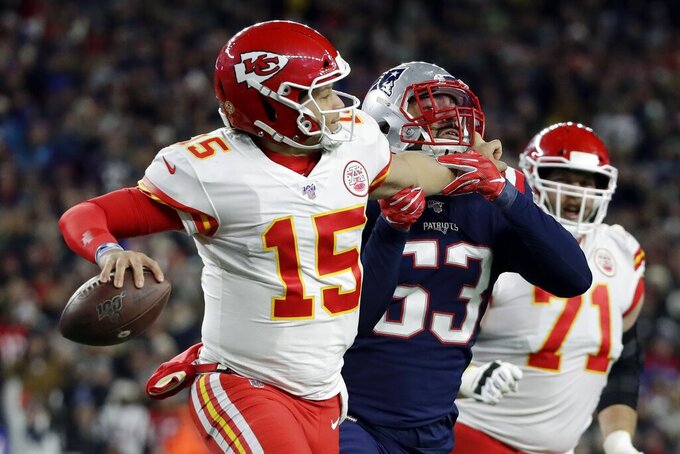 Kansas City Chiefs quarterback Patrick Mahomes grabs the face mask of New England Patriots linebacker Kyle Van Noy, right, as he rolls out to pass in the second half of an NFL football game, Sunday, Dec. 8, 2019, in Foxborough, Mass. Mahomes was penalized on the play. (AP Photo/Elise Amendola)

KANSAS CITY, Mo. (AP) — Drew Lock grew up about 15 miles from Arrowhead Stadium in suburban Kansas City, and his family has bled the red and gold of the Kansas City Chiefs for just about as long as the young quarterback can remember.

They'll be trading in their usual colors for orange and blue on Sunday.

Lock will attempt to continue his dazzling rookie run when he leads the suddenly hot Denver Broncos into the stadium where he once dreamed of playing. His task? Take down the Chiefs, who are coming off a victory in New England that sealed their fourth consecutive AFC West title.

“You think about it," Lock said, “that's my home. I've been there a thousand times. Nothing new about it."

Except that he'll be the visitor in one of the NFL's hostile environments.

Making it an even more intriguing homecoming, Lock's father Andy played for Chiefs coach Andy Reid when they were both at the University of Missouri. Andy Lock was good enough to warrant some NFL attention before a leg injury near the end of his senior season caused the offensive lineman to go undrafted. He wound up signing with the New York Giants as a free agent, but he never made his mark in the NFL — he wound up becoming a successful restaurateur.

“In his heart he was really a quarterback. I used to joke with him about that," Reid said with a grin.

Well, his kid has turned into a heck of a quarterback.

Drew Lock became the first NFL rookie to throw for 300 yards and three touchdowns in his first road start when he led the Broncos (5-8) to a surprising win over the Texans last weekend. His total of 309 yards was third-best by a rookie in franchise history, giving Denver fans some hope that the organization has at long last found a franchise quarterback.

He's the seventh quarterback to start a game for the Broncos since midway through the 2017 season.

“I don't put ceilings or floors on guys. They can go as high as they want, hopefully not too low," Broncos coach Vic Fangio said. “I think overall he's had a good two-week start to his career."

The trick now is to carry it into their game against the Chiefs (9-4), who have their own superstar quarterback in Patrick Mahomes and a rapidly improving defense that caused Tom Brady and the Patriots all kinds of trouble.

The task facing Lock is daunting: The Broncos have won just three of the 17 games they have played at Arrowhead Stadium in December. John Elway won one of those games in seven tries, and a long list of other quarterbacks have struggled with the raucous crowd and often-ugly weather — snow showers are in the forecast for Sunday with temps in the 20s.

“I think it was good that we got (Lock) his first start at home so when he got his first start on the road it wasn't his overall first start," Fangio said. “We have to go play another really good team this week. He's going to have to deal with the hometown stuff that you guys and they will want to write about. I feel good where he's at."

As the Broncos visit the Chiefs, here are the things to know:

Chiefs defensive end Frank Clark has been dealing with a stomach situation the last couple of weeks that the team thought at first was just a virus. He was well enough to play against the Patriots but it flared up again, so the team sought an expert to figure out what is going on. If he's sidelined down the stretch, it would mean the Chiefs lose their best chance of consistent quarterback pressure at a crucial juncture of the season.

SPEAKING OF THE PASS RUSH

The Chiefs finally showed progress under new coordinator Steve Spagnuolo during a 30-6 rout of Denver in Week 7, when their defense had nine sacks and held the Broncos to just 71 yards rushing. The Broncos need to give Lock more time than they afforded Joe Flacco if they have any hope of moving the ball against Kansas City.

A DIFFERENT KIND OF RUSH

The Chiefs hope to have Damien Williams back from a rib injury this week. He will join a running back corps that has been leaning on veteran LeSean McCoy, rookie Darwin Thompson and journeyman Spencer Ware since losing Darrel Williams to a season-ending injury. None of them have been particularly effective on the ground.

The biggest bright spot for the Broncos — other than Lock's emergence — has been the play of wide receiver Courtland Sutton, who is 10th in the NFL in yards-per-catch and is closing on 1,000 yards. Sutton has put up those numbers while catching passes from Lock, Flacco and Brandon Allen — not exactly the elite of the elite.

The Broncos are mathematically still alive in the playoff chase, though realistically they are trying to build some momentum for next season. And while the Chiefs have wrapped up their playoffs spot with a division title, they still harbor hopes of climbing past the Patriots to secure a first-round postseason bye.