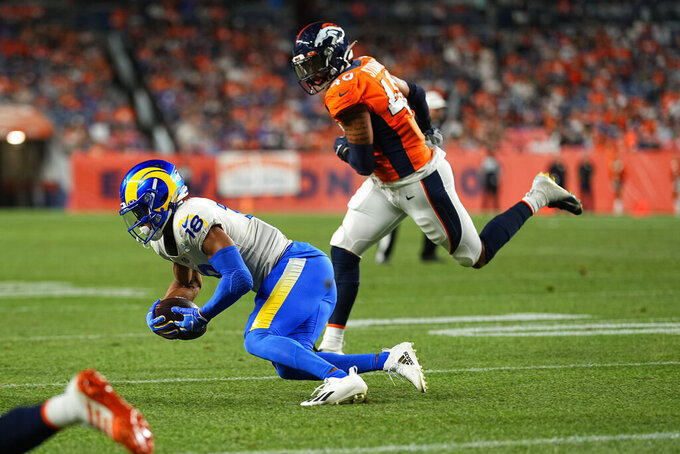 ENGLEWOOD, Colo. (AP) — The Denver Broncos haven't lost a game yet, but they have lost five starters in two weeks and the latest injury, to inside linebacker Josey Jewell, appears the most serious.

Coach Vic Fangio wouldn't confirm reports Monday that the fourth-year inside linebacker is out for the season with a torn pectoral muscle.

“Yeah, they're still doing the testing on him, don't have a total verdict on him yet,” Fangio said a day after the Broncos' 23-13 win at Jacksonville.

Teammates, however, were talking as though they'd be without their defensive play-caller for some time.

“I just was having breakfast with him, kind of talking with him about things and telling him I’m here for him, anything he needs,” said fill-in Justin Strnad, who missed his rookie season last year after breaking his wrist in training camp.

"That's something I went through last year, so anything he needs, I'm here to help him.”

The Broncos (2-0) also lost Pro Bowl outside linebacker Bradley Chubb on Sunday when he aggravated a right ankle injury that's been bothering him for a month and kept him out of the season opener against the Giants.

Chubb started to limp off after a play in the second quarter, then went to his hands and knees and punched the ground before trainers went out and escorted him to the sideline. He was replaced by Malik Reed and didn't return.

“You hate to see injuries happen to anyone, especially your teammates," defensive end Shelby Harris said. “But you know I believe in Justin. The ‘Dream Killer’ (Reed) is still here.

"Malik's made for these moments. I feel like every year, he's always being counted out somehow and he always comes up and makes a big impact. So, that's why we love him. He's Mr. Reliable. He's going to come in and make some plays.”

Reed filled in when Chubb tore an ACL in 2019 and he led the team with eight sacks in 2020 while filling in for Von Miller, who missed the entire season with an ankle injury.

Harris said he also has faith in Strnad and rookie outside linebacker Jonathon Cooper to fill in for the injured starters.

“I've seen the way Justin analyzes the game and he's ready to take that next step,” Harris said. “He just needed an opportunity and this is his opportunity. And then with Coop, Coop's a dog and I feel like any situation you put Coop in he's going to come out successful with his work ethic and his love for the game.”

Inside linebacker Alexander Johnson took over the play calling Sunday after Jewell was injured on a special teams play. Fangio said he hasn’t decided whether Johnson or Strnad will get those duties Sunday against the New York Jets (0-2).

Strnad has those duties for 10 days in August when Jewell was sidelined with a pulled groin.

“For me being out last year, those reps I was able to get in camp with Josey being out were crucial,” Strnad said. "I'm essentially like a rookie, so it was nice to get those snaps and get that experience with the starters out there because obviously playing with those guys it's a different level of football, different speed and communications.

“But as far as the opportunity it's not ideal like how you want an opportunity to come. The last few months me and Josey have grown pretty close. He's a great player, great teammate and really one of the big leaders on our defense. So, to lose him is obviously a big loss for this team.”

Now it's up to Strnad to mitigate that loss.

“I'm just really just prepared to help this team in any way possible, whether it be run game, coverage, anything, I'm just here,” Strnad said. “We've got a good thing rolling right now. We're 2-0 and I'm just here to do my job. Whatever the coaches need me to do I'm here to do it and I think I'm capable of doing all those things.”