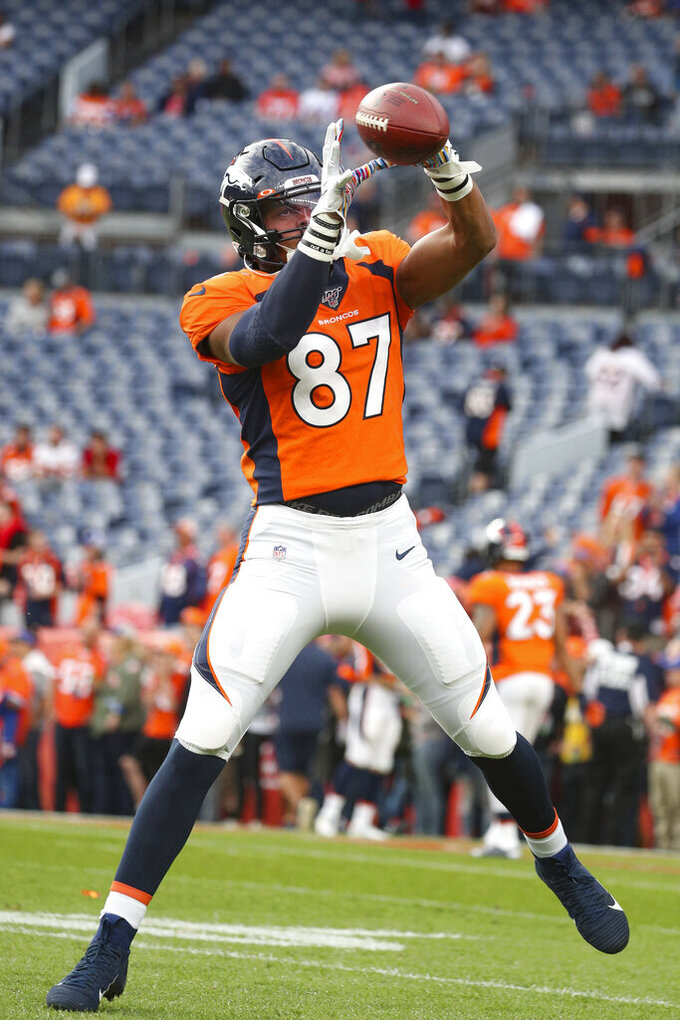 Denver Broncos tight end Noah Fant (87) catches a pass during warm-ups prior to an NFL game against the Kansas City Chiefs, Thursday, Oct. 17, 2019, in Denver. The Chiefs defeated the Broncos 30-6. (Margaret Bowles via AP) 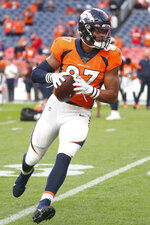 ENGLEWOOD, Colo. (AP) — With every catch and every dropped pass, Noah Fant is living up to expectations.

Tight ends, even first-rounders such as Fant, typically struggle as rookies to adjust to press coverage and digest playbooks, game plans and line calls in the NFL that are much knottier than the ones they had in college.

"Outside of the quarterback, I think it's the most difficult position," said Denver Broncos offensive coordinator Rich Scangarello, noting tight ends' rookie orientation consists of:

—Running routes and finding seams like a receiver or a running back.

They fatigue fast because they're running routes one snap and taking on blocking beefy bodies the next.

And they have to guard against letting the steep learning curve siphon any of their swagger as they bounce between flashes of greatness and flares of oh-my-goodness!

"It can be overwhelming," Scangarello said. "And then it slows down and at some point it just clicks and they go play fast. I see it every day with Noah the way he's practicing and getting better. I have no doubt that in the future it will get easier and easier and he'll play better and better."

It almost always takes until Year 2 for tight ends to begin to master their position and pay dividends.

That's why it wasn't such a surprise when Fant dropped three passes last week that could have accounted for well over 100 yards and set up three scoring opportunities in Denver's 30-6 loss to Kansas City.

Scangarello has seen this drill before with another former Iowa tight end, George Kittle, in San Francisco.

"George's first year in the league I think he led the NFL in drops, he was a liability in the run game at times, he would break the huddle and be unsure," Scangarello said. "... The finer things aren't there. A year from now, he'll be a completely different player and you hope that he is like Kittle and he's confident."

The Broncos are counting on Fant to step up his game and help make up for the loss of receiver Emmanuel Sanders, who was traded to the 49ers on Tuesday, and Fant insists he can fast-track his NFL education over the remainder of his rookie season.

Of his trio of drops last week, all on low passes from Joe Flacco, "the common denominator is me," Fant said. "I've got to catch the ball. I've made those catches a thousand times in practice. I've made them in games before. So it's just a matter of focus on it and doing it. It's nice that you can say, 'I've done it before, I've done it before.' But I've got to make them count in the moment."

Fant has 15 receptions for 159 yards and a touchdown so far, and he isn't alone in his rookie struggles.

T.J. Hockenson , his former Hawkeyes teammate who was selected eighth overall by the Lions, a dozen spots higher than Fant, has 18 catches for 219 yards and two scores. But he has just 12 catches for 88 yards since his spectacular debut against Arizona in the opener when he had six grabs for 131 yards and a touchdown.

Mike Ditka is the only one in this group who was more productive as a rookie in 1961 than in his second season, when the Bears were more balanced.

Frank Reich, whose Colts (4-2) host the Broncos (2-5) this weekend, has his own example of a tight end whose trying rookie season paid off in Year 2 and beyond in Eric Ebron.

"I just think when you play inside like that, there's a lot to understand with coverages and leverages and then how defenses, the coverages at this level, are more complex," Reich said. "Obviously the players at this level are that much better. And then it's just a question of confidence, just getting the confidence and making the plays.

"Yeah, watching Noah coming out of college, I mean we had him like everybody else: rated off the charts high as a player. I know there will be big things ahead for him, for sure."

Flacco is also a big believer in Fant's future.

"Noah's a guy that needs the reps," Flacco said. "He's a raw athlete, he can run, he can jump, he can do all those things. But as far as playing football and really getting comfortable and letting things slow down so he can use all those things to his advantage, that takes time."

Notes: The Broncos claimed DL Jonathan Harris off waivers from the Bears. He's a 6-5, 295-pound undrafted rookie out of NAIA Lindenwood University.