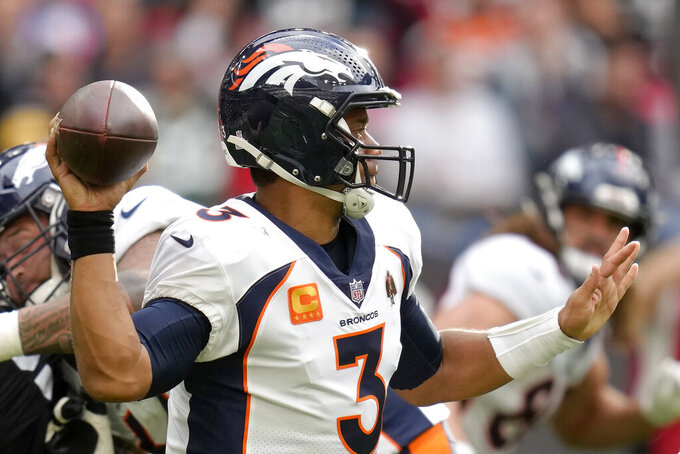 ENGLEWOOD, Colo. (AP) — What stood out as Nathaniel Hackett surveyed the damage of his dismal start in Denver was that there weren't many standouts.

At least not on offense, there weren't.

“We challenged the offense this whole week. We need to be able to make big-time plays in big-time situations. I think that’s been the kind of thing that’s been holding us back,” Hackett said in the glow of the Broncos' 21-17 win over the Jaguars in London that snapped them out of their monthlong funk.

Jerry Jeudy stepped up first, grabbing a 25-yard pass to the Jaguars 6, then sweeping in front of Russell Wilson for a tiny toss that he took to the end zone.

“I thought that it was great to see Russell feel comfortable, especially on that drive,” Hackett said. “Just sitting in the pocket, the line did a great job of protecting him during that time.”

KJ Hamler was the hero of Denver's winning drive, hauling in a 47-yard pass on the first snap and adding a 9-yard run before Latavius Murray took it in from 2 yards out.

Hamler, who famously slammed his helmet to the ground after Wilson didn't see him wide open and misfired a pass to a covered Courtland Sutton to seal a loss to the Colts on Oct. 6, gave Wilson a big bear hug as his quarterback was doing a postgame interview.

“I think that we’ve been in every single game,” Wilson said. “This season could be completely flipped around, and the only way we can flip it around is ourselves. We’ve got to keep answering the bell.”

As usual, Denver's defense made it all possible, with Justin Simmons' goal-line interception in the first half keeping the Broncos from falling into a double-digit deficit and K'Waun Williams' one-handed pickoff helping seal the win.

The victory sends the Broncos into their bye week with a much better vibe than they had while struggling to score points under Hackett’s drifting direction and Wilson’s uneven play.

While there's still a long way to go for the Broncos to end their six-year playoff drought or even to snap their five-year run of losing records, they at least showed some glimpses of how this team might pivot toward more prosperity in November.

“This was kind of a step in the right direction because we were able to make that big-time play when we needed to.”

Defensive end Dre'Mont Jones, who had a sack and three tackles for loss, said it was nice to see both offense and defense working hand-in-hand.

“We snapped that losing streak. That losing streak, like (it was for) many of our fans probably, was getting on my nerves, too,” Jones said. “So, it was huge to win this game and then take a little break.”

Denver’s defense, which has held seven opponents under 20 points and is allowing just 16.5 points per game — second in the NFL behind Buffalo (14.0).

Offensive consistency. The Broncos had another half-dozen three-and-outs, three of them sandwiched between their second-half scoring drives of 98 and 80 yards.

Cornerback K'Waun Williams has been playing with a cast on his right arm after tearing ligaments in his wrist and elbow, but that didn't prevent him from intercepting Trevor Lawrence's pass in the closing minutes.

Receiver Courtland Sutton caught just one of four passes thrown his way and failed to block his guy on a screen pass for the third consecutive week.

3 for 3 — The Broncos' performance in the red zone against Jacksonville, although they're still last in the NFL in red zone efficiency at 35%.

After a bye next weekend, the Broncos face a formidable second half with two games against the Chiefs and trips to Tennessee, Baltimore and Los Angeles to face the Rams.