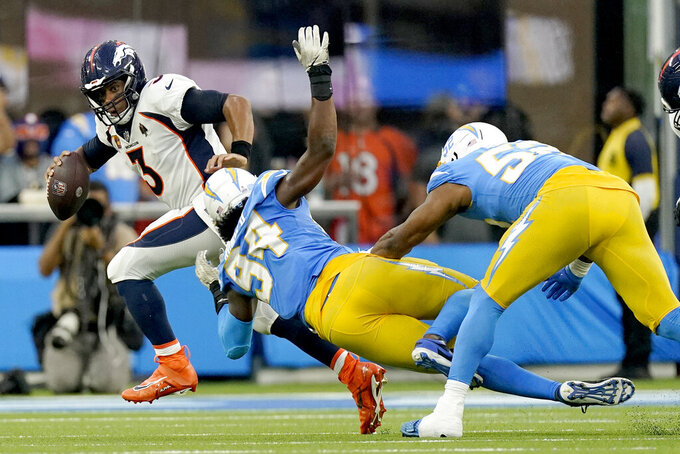 ENGLEWOOD, Colo. (AP) — Russell Wilson is day to day with a strained hamstring.

A week after getting treatment for an injury near his throwing shoulder, the Denver Broncos quarterback said he tweaked a hamstring during the fourth quarter of Monday night's 19-16 overtime loss to the Los Angeles Chargers.

“I kind of scrambled and moved around on one, had to throw it away. It got me pretty good in the fourth quarter. Just tried to play through it and all that,” Wilson said. “I felt good moving around, running around and throwing it and everything else, especially early on, and then that happened, so that was a little unfortunate. But, you know, trying to find a way to win the game.”

Coach Nathaniel Hackett confirmed that Wilson went for an MRI on Monday, but he demurred when asked what the test showed.

“We're still looking at it, evaluating it, getting a feel for it,” Hackett said.

When they host the New York Jets (4-2) on Sunday, the Broncos might have to turn to backup Brett Rypien, whose only career start was a 37-28 victory over the Jets at the Meadowlands in 2020, or longtime reserve QB Josh Johnson, who has started nine times in his 11-year professional career and is on the team's practice squad.

Hackett declined to say if he thought Wilson would miss any practice time this week. He didn't miss any practices last week after getting an injection to relieve discomfort near his right shoulder.

“With Russell, he's the ultimate competitor,” Hackett said. "He's going to do everything in his power to get out there on that field. We have to make sure that he's healthy enough to be able to go out and play at a high level.

“Whoever's got to go in, if it's ‘Ryp,’ Josh, I feel confident we'll try to build a plan for them that makes them successful.”

Wilson was 15 of 28 for 188 yards and a touchdown for the Broncos (2-4), who dropped a game in overtime for the second straight week.

Wilson, a nine-time Pro Bowl selection, received an injection for a strained muscle near his throwing shoulder after the Oct. 6 overtime loss to the Indianapolis Colts. The platelet-rich plasma injection was used to treat a strained latissimus dorsi on his right side. It is the large, flat muscle on the back that stretches to the sides and behind the arms. Wilson sustained the injury during an Oct. 2 loss at Las Vegas and then played through it on a short week.