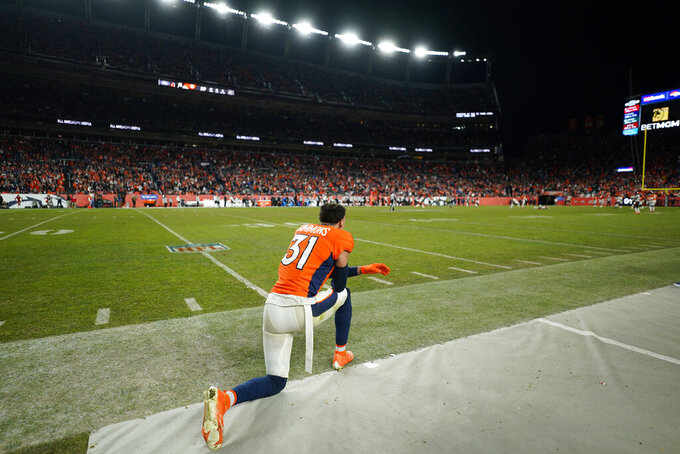 Denver Broncos free safety Justin Simmons (31) watches during the second half of an NFL football game against the Cincinnati Bengals, Sunday, Dec. 19, 2021, in Denver. The Bengals won 15-10. (AP Photo/Jack Dempsey)

The paths for Denver and Las Vegas have been somewhat similar this season with 3-0 starts followed by rough patches that have both in the same spot heading into the stretch run.

The Broncos (7-7) and Raiders (7-7) are in a cluster of four teams tied for 10th place in the AFC headed into their meeting in Las Vegas on Sunday with neither team likely able to afford another loss.

“We’re excited that we are relevant in December,” Raiders interim coach Rich Bisaccia said. “That’s what we all try to do. We all want to get in the tournament.”

Being relevant isn't exactly like the “Just win, baby!” credo the franchise once clung to. But after only one playoff berth the last 18 seasons, it is a sign of at least marginal progress.

It has come in a difficult season that has seen coach Jon Gruden resign in December over the publication of offensive emails and receiver Henry Ruggs III getting cut after being charged with felonies in a fatal DUI crash that killed a 23-year-old woman.

Ruggs' release was followed by five losses in six games, but the Raiders managed to stay alive with a last-second 16-14 win at Cleveland last week over the COVID-ravaged Browns.

The Broncos are hoping for the same to avoid their first six-year playoff drought since first making the postseason in 1977 when they went all the way to the Super Bowl.

Denver won its third Super Bowl in the 2015 season in Peyton Manning's final campaign, but the inability to find the next franchise quarterback has prevented any since.

The Broncos hoped Drew Lock could fill that role when he was drafted in the second round, but he lost his starting job after a rough second season.

Now with Teddy Bridgewater sidelined with a concussion, Lock will get his first start of the season with the Broncos clinging to their slim playoff hopes after losing last week at home to Cincinnati.

“I feel like we’re in no man’s land," linebacker Baron Browning said. "Correct me if I’m wrong, but we’ve got to win out pretty much. We’re in the land of no return. We’ve just got to put all our chips in and do what we can to secure that spot.”

Lock makes his first start since Week 17 last season when he threw for a career high 339 yards and two TDs with no interceptions in a home loss to the Raiders. Lock threw four INTs in a loss at Las Vegas last season and performances like that were why the Broncos went with Bridgewater this season.

Lock feels his time on the bench this year has made him better.

“I absolutely do," he said. "There’s a lot of work that’s gone into my game — mentally and physically — up to this point. Now it’s time to put it all together and go show that I am a better quarterback than I was.”

The success Las Vegas had early in the season generating big plays has been hard to find of late. The Raiders have gone back-to-back games without a play from scrimmage gaining at least 20 yards for the first time since 1992.

Despite that, they are still tied for the most big plays this season with 65, with seven coming in the first game against the Broncos.

Broncos slot cornerback Bryce Callahan returned from a knee injury last week and will have his hands full on Sunday. Las Vegas' Hunter Renfrow has been one of the top slot receivers in the league this year with 89 catches for 909 yards and five TDs.

“I thought he played well the other day for his first action back,” coach Vic Fangio said. “Renfrow is a super slot. He’s really tough to cover, he’s really quick, he’s a favorite of Carr’s, and they have good chemistry together. It’s a tough assignment.”

The Raiders had a season-high five sacks in the first meeting, with Maxx Crosby involved in all of them with one solo sack and four half-sacks. Crosby doesn't have any sacks since that game despite generating the most pressures on the quarterback this season, according to Pro Football Focus. It has been an issue of late for the Raiders, who had 21 sacks the first eight games, but only eight in the last six contests.

Before the results were announced, Fangio said: “I think, for sure, Justin Simmons will be on there. He made it last year and he’s had a better season this year.”

Others he felt were deserving of a nod and his endorsement: Surtain and running backs Melvin Gordon and Javonte Williams.