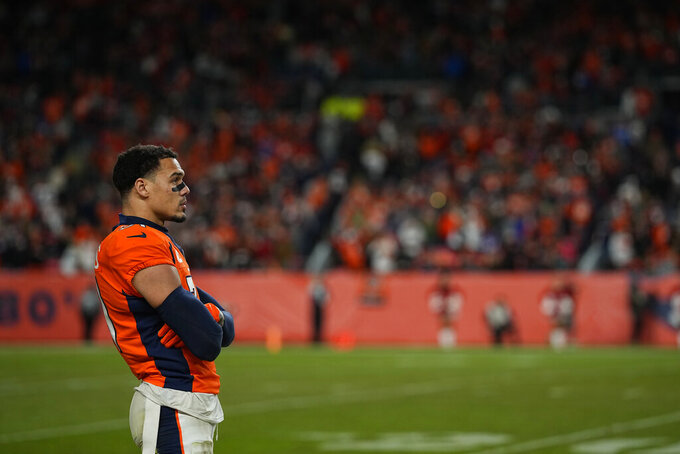 Denver Broncos free safety Justin Simmons watches during the second half of an NFL football game against the Cincinnati Bengals, Sunday, Dec. 19, 2021, in Denver. The Bengals won 15-10. (AP Photo/Jack Dempsey)

ENGLEWOOD, Colo. (AP) — The Denver Broncos are paying for their prolonged playoff drought.

The biggest snub was safety Justin Simmons, who has tied his career high with five interceptions and has a career-best two sacks after signing a four-year, $61 million extension in the offseason.

Although Simmons is a first alternate along with left tackle Garett Bolles and rookie cornerback Patrick Surtain II, coach Vic Fangio said Thursday that the snub of Simmons in particular caught him off-guard.

“I was very, very surprised and disappointed. I think Justin Simmons — I think I told you guys yesterday — it was a no-brainer,” Fangio said. "He made it last year and he’s playing even better this year. I think Surtain was more than worthy of it, and our two backs. We did have five guys make the alternate list, but very, very surprised.”

Fangio had advocated for running backs Melvin Gordon and Javonte Williams, but their almost even split of carries probably worked against him, as did Surtain's status as a rookie.

— The Broncos (7-7) are in danger of extending their playoff drought to six years, the longest for a Super Bowl champion.

— The Broncos lost both of their primetime games this year, at Cleveland and at Kansas City.

If there were four safety spots, Simmons wouldn't have been snubbed for his Pro Bowl-worthy season, one in which he's held Denver's defense together despite churning through eight inside linebackers and series of injuries in the secondary.

The Broncos have the league's No. 2 scoring defense at 17.4 points per game.

“I mean, I did. Well, like first and foremost, the guys that made it were more than deserving,” Simmons said. "Those three guys have had a heck of a year. But I mean, of course if you ask any guy in this league that's competitive, you always think you're the best at what you do.

“And so, obviously, I think I'm the best at what I do,” Simmons said, adding that it's because of those around him who have helped him shine.

Simmons, who was also snubbed from the Pro Bowl two years ago only to make All-Pro second team, said he knows how to put a halt to these disappointments.

“What I'm concerned with is trying to find ways to win more games, get in the playoffs and you know, those individual accolades will come," Simmons said.

"We've had linebackers plug in week in and week out that have played absolutely amazing for us. So, I just think guys don't get the recognition they deserve, unfortunately, because we haven't been winning.”

Case in point: Last week the Broncos held Joe Mixon to 58 yards, Joe Burrow to 157 yards, Tee Higgins to 23 yards and Ja'Marr Chase to 3 yards, yet couldn't manage a single takeaway and the Broncos lost 15-10 to the Cincinnati Bengals.

They kept Patrick Mahomes on the sideline with a 20-play, 11-minute drive but came away with no points in a 22-9 loss to the Chiefs.

“We just haven't found ways to win those games,” Simmons said. “And for me, that's a little bit more important. Because once those things start happening, the recognition starts coming.”

NOTES: C Lloyd Cushenberry III landed on the reserve/COVID-19 list, and while there's a chance the vaccinated Cushenberry could make it back for the game, the Broncos are weighing two other options: plugging in backup Austin Schlottman or moving rookie RG Quinn Meinerz to center and putting Netane Muti in at right guard.