Broncos scuffling at QB, cornerback but McManus coming back 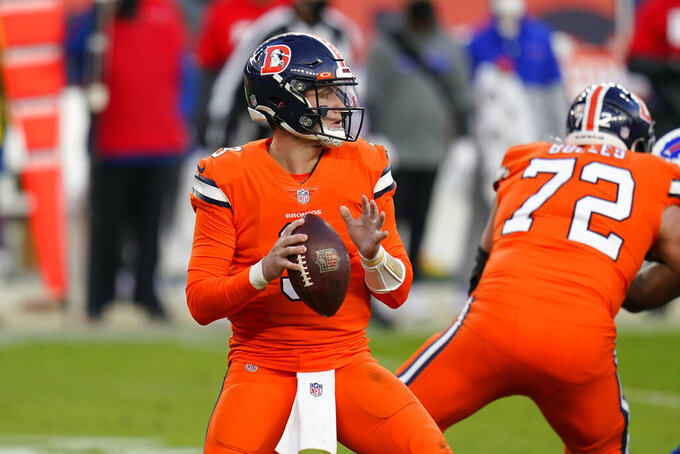 Denver Broncos quarterback Drew Lock throws a pass during the first half of an NFL football game against the Buffalo Bills, Saturday, Dec. 19, 2020, in Denver. (AP Photo/Jack Dempsey)

ENGLEWOOD, Colo. (AP) — Kicker Brandon McManus is due back this week from the COVID-19 reserve list, and while that won’t settle the Denver Broncos’ cornerback conundrum or quarterback quandary, it will at least provide some normalcy in a wacky season waylaid by injuries and coronavirus concerns.

“Brandon is still going through the protocols. If he keeps progressing the way he has been, we’ll have him back this week,” coach Vic Fangio said Monday.

Fangio added that Taylor Russilino, the 31-year-old rookie who had a dismal NFL debut while subbing for McManus in Denver’s 48-19 loss to Buffalo on Saturday, will revert to the team’s practice squad.

The Broncos (5-9) felt good about their chances against the Bills (11-3) when they came out of the tunnel trailing by just one score. But Russolino’s kickoff only made it to the Buffalo 4 and Andre Roberts returned it 53 yards into Denver territory, setting up Josh Allen’s second touchdown run.

Just 17 seconds later, Drew Lock was strip-sacked for the second consecutive week and defensive end Jerry Hughes’ scoop-and-score made it 35-13.

And dashed were any hopes of winning out to avoid a fourth consecutive losing season.

The salt-in-the-wound moment came later in the third quarter when rookie cornerback Michael Ojemudia was ejected for throwing a punch at Bills rookie receiver Gabriel Davis. That further depleted a cornerback corps that was already down five players, including starters A.J. Bouye (suspension) and Bryce Callahan (foot).

Ojemudia had been holding his own while De’Vante Bausby was getting schooled by Allen and Stefon Diggs all game. Ojemudia was replaced by Nate Hairston, who the Broncos plucked off the Ravens’ practice squad earlier this month.

“He definitely deserved what he got,” Fangio said of Ojemudia's ejection after watching the coaches tape. “Him and the wideout were just jostling there and he did throw a punch, and that’s an automatic ejection and that’s disappointing. I think it reflects poorly on Michael and that was a poor decision at that time. Hopefully, it’s one that he’ll learn from and will never commit again.”

Fangio said he’ll stick with Ojemudia, Bausby and safety-by-trade Will Parks, who has played two games since being claimed off waivers from Philadelphia. Parnell Motley, claimed off the 49ers’ practice squad, is also in the mix as the Broncos prepare to face Chargers QB Justin Herbert on the road Sunday.

Lock hasn’t thrown an interception in two weeks but he’s lost fumbles in each of those games, giving him 16 turnovers in 2020. He's now started 16 games, a full season's worth, and is 8-8 with 21 TD throws, 16 interceptions and a 59.7% completion rate.

Asked if Lock has shown enough to remain the incumbent heading into 2021, Fangio demurred.

“I just want to see winning football ... from everybody,” Fangio said.

Pressed, Fangio added, “We’re all being evaluated: players, coaches, everybody.”

For all their flaws, the Broncos are 7 for 7 in the red zone the last three weeks.

“It’s definitely something to build off,” Fangio said. “I think that indicates growth.”

Denver’s defense hasn’t had a takeaway in three weeks.

“There is no magic wand or magic potion or we would have gotten it already,” Fangio said. “We’ve just got to keep pounding away at it and do better.”

OLB Bradley Chubb (ankle) is expected to practice this week, but Fangio said he’s not sure if that will be on Wednesday.

OLB Von Miller (ankle) still hasn’t been medically cleared to return to practice. “Right now I’m not optimistic that he’ll be out there" this season, Fangio said. Miller was injured in September and had optimistically targeted mid-December for his return.

5 — receptions by wide receivers of Lock’s 20 completions, including one each by rookies K.J. Hamler and Jerry Jeudy.

8 — career high number of catches for TE Noah Fant, including one for a TD on Saturday.

Out of the playoff race, it would behoove the Broncos to go ahead and lose to the Chargers and Raiders, too, to round out 2020. If they win their last two like they did last year, they'll finish 7-9 again and draft in the teens rather than the top 10.